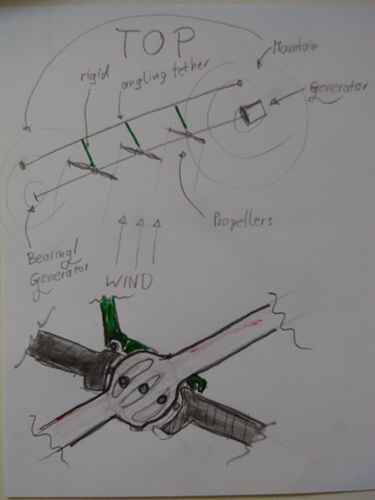 No, really, it’s a serious proposal.
Have a look at my rendering: 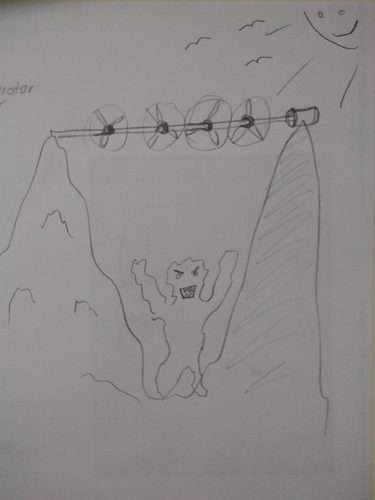 I suggest the following improvements in the ground based Superturbine® system. This is similar to Luke’s “Superturbine Variant”, but uses off-the-shelf parts. These concepts are applicable to my concept of multiple turbines on a tether connected to a ground based generator by means of a cable drive.

· Each turbine is mounted on a double universal joint so that they can be angled to directly face the wind to eliminate cosine cubed losses. Turbines are spaced so that downwind turbines are unaffected by the wake of upwind turbines. With this system, the space between turbines can be shorter due to the angle of the torsion tubes.
· A sleeve bearing on each universal joint is attached to a frame which fixes the angle of the turbines to directly face the wind.
· A cable drive connects the turbines to a ground-based The generator. This should be centrally located to eliminate cantilever forces. By adjusting the relative size of the top and bottom pulleys, suitable gear reduction can be obtained. This system therefore transfers the weight of the generator to the base of the system, and eliminates the gear reducer.
ST IMPROVEMENT.pdf (58.7 KB)

This is a part of a SuperTurbine ™ variant which is similar to that from @gordon_sp and @Tom, by using bevel gears. Unfortunately their cumulative friction was too high.

That works with only one bevel gear, a larger propeller that rotates bottles to test Magnus effect, but this is another story.

Yes of course all roads lead to SuperTurbine ™
That concept is already patented, published, and featured in this video produced for Discovery Channel