The UNAv, a wind-powered UAV for ocean monitoring: performance, control and validation

The English CC is accurate.

The UNAv, a wind-powered UAV for ocean monitoring: performance, control and validation

Abstract— Wind power is the source of propulsive energy for sailboats and albatrosses. We present the UNAv, an Unmanned Nautical Air-water vehicle, that borrows features from both. It is composed of a glider-type airframe fitted with a vertical wing-sail extending above the center of mass of the system and a vertical surface-piercing hydrofoil keel extending below. The sail and keel are both actuated in pitch about their span-wise axes. Like an albatross, the UNAv is fully streamlined, high lift-to-drag ratio and generates the gravity-cancelling force by means of its airborne wings. Like a sailboat, the UNAv interacts with water and may access the full magnitude of the wind. A trim analysis predicts that a 3.4-meter span, 3 kg system could stay airborne in winds as low as 2.8 m/s (5.5 knots), and travel several times faster than the wind speed. Trim flight requires the ability to fly at extreme low height with the keel immersed in water. For that purpose, a multi-input longitudinal flight controller that leverages fast flap actuation is presented. The flight maneuver is demonstrated experimentally

Its a really cool idea that may be scalable to larger scales. But in reality its not that different to a foil sailboat is it? The only difference being that the foil sailboat is generating the lift subsea rather than in air. The foil sailboat on the other hand would have almost unlimited lift in a small package. I know where my R&D money would go… A sailing hydrofoil, hydrofoil sailboat, or hydrosail is a sailboat with wing-like foils mounted under the hull. As the craft increases its speed the hydrofoils lift the hull up and out of the water, greatly reducing wetted area, resulting in decreased drag and increased speed. A sailing hydrofoil can achieve speeds exceeding twice the wind speed. Both monohull and multihull sailboats can be retrofitted with hydrofoils, although greater stability can be achieved by using the wider planform of a ...

It’s a shame the demonstration test vehicle didn’t have the vertical sail component.
Getting that mass to rise above the water at starting speeds really does seem easier with a hydrofoil.
Maybe if they configured a triangular configuration of the driving sail and the lifting wing kinda like Sail-Rocket… https://images.app.goo.gl/aDP7ezRCyCHEso917
but then only ever go round the world one way rather like an ocean going haggis

Another configuration going thru my mind way back in the 1980’s as I was learning CAD.
I had envisioned sailing of the future as an air sport, with the craft and crew possibly airborne, looking down a long tether to a keel in the water.
Now we see the concept as yet another “press-release breakthrough” for the 21st century.
The question in my mind is whether this experiment will ever transition to a product that fulfills the promise, or is it just people seeing some possibilities and running a few experiments.

The one issue that is not resolved is how to deal with the rolling moment caused by keel and sail. If you want to balance that with ailerons I think there is probably not much moment to spare, and the drag of the plane will be suffering from such a moment

@dougselsam your idea of adding the tether actually solves a lot of the moment issue just like a kite sailboat could have less rolling moment. The moment of the sail is easily fixed by just using the wing rather than a sail on top of a plane.

So this new structure is probably more feasible than the original video. The benefits would be that the passengers were not affected by tha waves. Still, why would you want all that weight airborne? And WTF to do in a lull?

So to advance the idea I’ll suggest an improved structure. This time I’ll forego the sailing/wind part altogether and suggest an electric submarine carrying batteries and steering, then attach a carriage suspended beneath a wing (think hangglider in smallest scale). The two are connected by a tether. 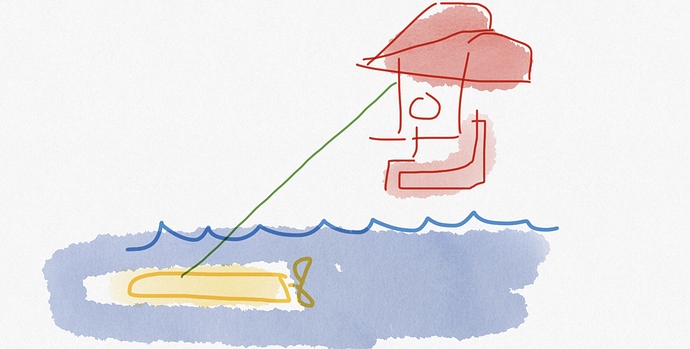 Benefits? The sub can have a large weight and small crossection (low drag) while still easily travel well beneath the swell. The passengers are placed in the air unaffected by the waves. And there is very little drag involved, so the vessel can travel fast and far.

Let me also take this somewhat further by assuming a cylinder sub of 50 cm diameter and 2 m length. The drag coefficient is 0.1. The hangglider is 20 sqm with a drag coefficient of 0.1. At 30 m/s the drag power is approx 305 kW. The volume 0.4 m3 should be able to hold 200 kWh of energy, or 0.64 hours of travel or 37 nm. The range for this craft would be approx one fourth Kristiansand in Oslo. The cost of the batteries would be comparable to 2.3 Tesla Model S batteries.

Note: The calculations went through a few way too optimistic versions before landing at something pretty useless.

In the meantime here is a video showing the Seaglider which comprises Didier Costes’ “Chien de mer” which is a floating daggerboard with foils, the kite, then the user between them. @dougselsam your idea of adding the tether actually solves a lot of the moment issue just like a kite sailboat could have less rolling moment. The moment of the sail is easily fixed by just using the wing rather than a sail on top of a plane.

Yes the wing on top of the airplane seems redundant. The wing is already a wing.