Towards a viable AWES

There is nothing new in the following design, excepted perhaps later improvements.
It is a rotor with secondary turbines under a lifter. The electric transmission allows reaching really high altitude. The main rope is motionless in order to avoid a too big wear and protect the electric cable. The lifter is also a supplementary safety in the case of computer failure. The rotor allows a constrained figure being not exclusively dependent on the computerized control. The rotor scalability can be a concern but rotor blades for autogiro or helicopter have higher aspect ratios than aircraft wings, and are far lighter. Then suspension lines reduce loads. Critics and observations are welcome. 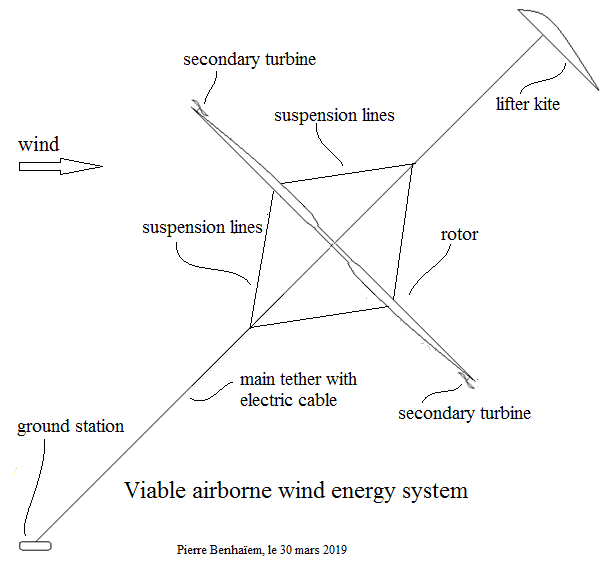 Except for the lifter kite that is basically what

is developing - and actually already flying. Since they do not have a force vector from the lifter they do need active pitch control though.

Blades tips energy, a French company based in Grenoble try to do that since 5 years but without a lifter. I don’t think that could work without a lifter anyway. I know the guy, Rogelio Lozano. They already began to pivot 1 year ago to do a radio transmission tower. Might be not convincing enough to go on power production as it is a clissical pivot. Zéphyr solar, a helium solar ballon did the same thing 1 year ago.

If you want to build a small demonstrator of the concept this toy:

The active pitch control of a rotor is complex and expensive. There are two possibilities of doing without: putting a lifter, or making a gyro kite with a body like this:


Turbines in the tip of blades take faster apparent wind and can be smaller. I don’t think that centrifugal force is so important in regard to wind force, at least as the rotor scales. So a relatively rigid construction can be better.
1 Like
PierreB March 31, 2019, 11:00am #6

IMHO http://bladetipsenergy.com is developing a good concept that could be suitable as an AWES. For that some possible improvements are a higher aspect ratio of the blades, the secondary turbines in their tips, adding suspension lines or bridles to counter the bending moment of the blades, and a lifter. After there are some interesting possibilities.

To obtain a (if not the) viable AWES: having wind turbines on a LTA windpower like on http://www.ltawind.com/Main.php?lang=en then combine that with


The second link is on

https://forum.awesystems.info/t/an-alternative-method-to-tap-high-altitude-winds/949/14?u=pierreb
Some interesting points are:
Table 5 Reference photovoltaic plant considered for hydrogen production
and
12 Conclusions: Hydrogen, which can be produced on board, simplifies the management of airship during long missions.

For an AWES I think about photovoltaic panels covering the top of the envelope and ensuring the production of hydrogen to fill buoyant gas leaks by replacing it, and supplying the VTOL which uses the wind turbines on board.

And as additional significant feature: a stationary operation mode with a high elevation angle, allowing secondary use on the ground or the sea. 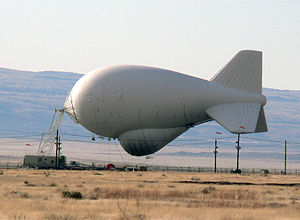 The Tethered Aerostat Radar System (TARS) is an American low-level airborne ground surveillance system that uses aerostats (moored balloons) as radar platforms. Similar systems include the EL/M-2083 and JLENS. The aerostats are large fabric envelopes filled with helium, and can rise up to an altitude of 15,000 feet (4,600 m) while tethered by a single cable. The largest lifts a 1000 kg payload to an operating altitude providing low-level, downward-looking radar coverage. The aerostat consists o...

We must also consider that no airborne wind turbine project has succeeded in spite of years of R&D and significant funding, and in particular the so-called “crosswind” systems, that due to several obstacles of which a lack of reliability preventing any serious secondary use, and also an efficiency decreased by cosine losses, by irregular (due to the place of the AWES in the window flight) and discontinuous operations, and difficulties for takeoff and landing operations…

So, for this new year, let us wish a new orientation of R&D for AWES.

LTA does not point “towards a viable AWES”, but points away; based on my experience in both fields, LTA is for kids and foolish investors, but AWE is for everyone.

LTA does not point “towards a viable AWES”, but points away; based on my experience in both fields, LTA is for kids and foolish investors, but AWE is for everyone.

It is an opinion, not more.

Let lack of LTA success be the proper test of my opinion.

I agree on the essential. That said Bladetips Energy blades seem to have a low aspect ratio (see below) and a relatively high area, likely in order to assure lift by active pitch control. And also the turbines are not settled in the tips of the blades. So they don’t benefit from the maximum linear speed, and should be larger and heavier to compensate this. See also Blade Tip Turbines topic. 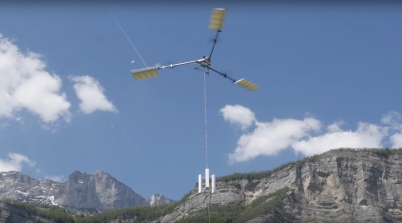 It is the reason why I would prefer blades with higher aspect ratio for a better efficiency, and turbines settled in their respective tips. I put again a photo from quoted topic above. This rotor would be used under a kite lifter as for the drawing in the initial post. Perhaps I could remake it then test, at least its TSR with then without turbines. 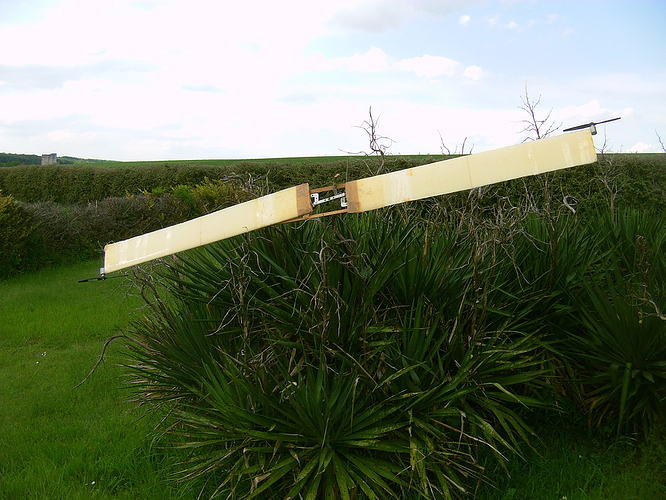 Some sketches of autogyro fly-gen AWES. 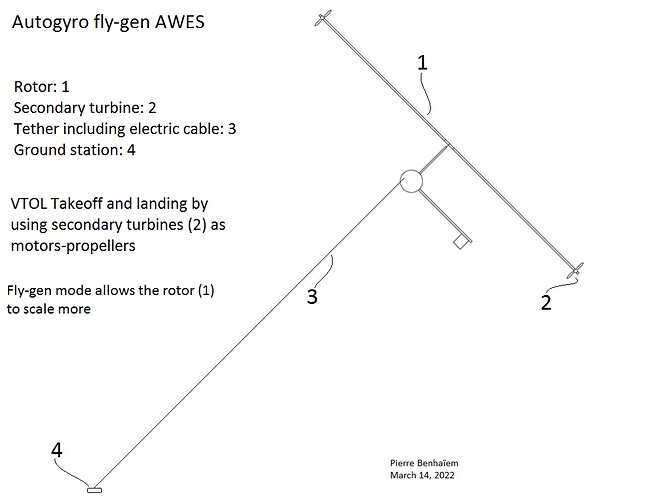 Several unities that are connected by Sharp rotor as separators while providing both aerostatic and additional aerodynamic lift:

As far as I know, there is ONE type of wind energy: the type that spins.

Hi Doug,
Do you mean that it should be the same for AWES? And what would be the spinning devices: only rotary AWES (Sky windpower, Daisy, SuperTurbine ™, Kiwee…), or in addition AWES including fly-gen, as the generators aloft spin?

Hi Pierre: Ever noticed how the name of this “topic” (Towards a Viable AWES) encapsulates every AWES effort? After 14 years, still looking an anything that might be even just “viable”…
You gotta spin to win. That’s all I can say. Taming the wind means you gotta spin. However you do it, you need spin, if you want to win. 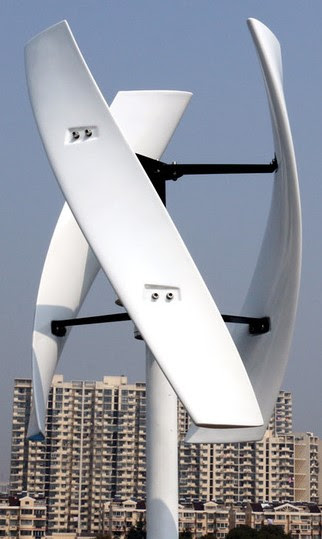 This patent takes the vertical axis wind turbine to the next level of performance by adding solar and creating solar photovoltaic rotation in a hybrid wind/solar electrical-power generation system. When wind velocity drops, the solar cells provide power to a motor that drives the wind turbines so electrical current is being generated even at low wind speeds. When wind speed is sufficient to turn the turbine blades at the desired speed, electrical power from the solar cells is stored in a battery so it is available when needed after sunset. This configuration creates an electrical-power generating configuration that is far more productive than just a wind-only turbine or just a rooftop of solar panels.