Using a Hobbyking Raven 990 for a build of "The Pyramid"

Cost quickly sails up as an issue. In particular the cost of the 4 kW generator adds up a lot costing in excess of 1000€. So I was thinking, could it be done cheaper and simpler to achieve the same goals of the prototype?

The most obvious place to start is by choosing a smaller kite/aircraft. A quick internet search gives me something like this. 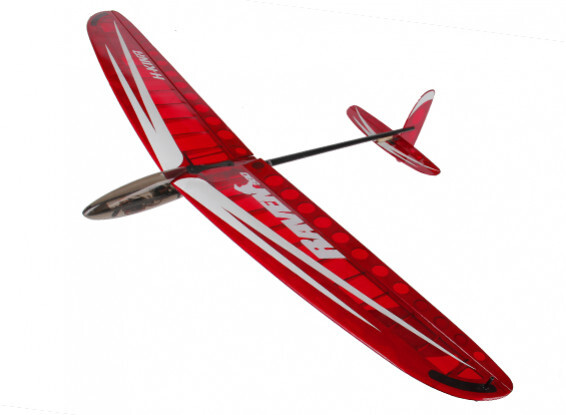 The small DLG glider has a wingspan of 990 mm vs 1600 mm of the raven. This should reduce the wing area (and size) by an approximate factor of 1.6x.

A problem with such a wing is that you don’t have ailerons, so we would have to assume for now that the dihedral and rudder would give sufficient roll control for the prototype to work. Edit: actually the raven is rudderless, the problem is similar, though maybe better for this purpose

The lower wingspan would also scale down the cartwheel by 1.6x.

We run the scaled down version through TRPTSim 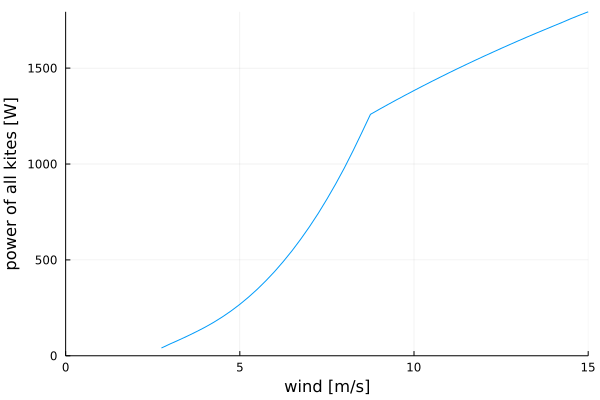 I also received some other advice during discussions at AWEC. AWE builds scale to bigger wind speeds with scale. In particular square-cube scaling (wing area vs mass) lends to this, but also other effects maybe. A scaled down build will never fully represent a really large one. The goal of an initial build like this may be to see if the prototype works at all, and to verify the simulation tool.

This is why at this stage, there does not seem to be really good arguments to run the prototype rig at 12 m/s, creating so high tension that the wings with minimal reinforcement may even break. So lets instead say that we would limit the prototype to 6 m/s maximum wind speed. As the prototype should ideally start to run around 3 m/s windspeed due to its small scale, there should be plenty of wind range to play with. In any case, initial tests may probably be better done indoor or a zero wind day using the generator as a motor. The prototype could be made to run in more winds by limiting \Lambda [moment per tension and looping radius].

For running at 6 m/s, we should have a rotational speed of 80 RPM with a shaft moment of slightly more than 50 Nm, giving an output of a little less than 500 W.

There are many other costs, but bringing the initial cost down would always lower the barriers of entry.

Price of kites plus generator thus would end up around €615. Of course there would be many additional costs for tether, electronics, tools, cartwheel, tilting mechanism, base, tether reeling etc. And, not to mention spare kites.

Using something even smaller, like this one would bring the power further down from 500 W to 300 W 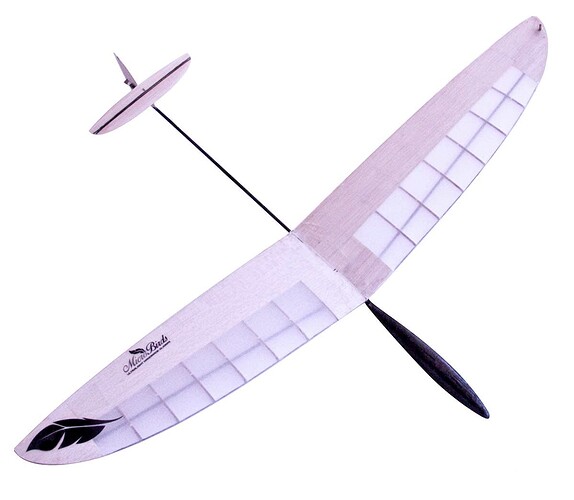 received some other advice during discussions at AWEC. AWE builds scale to bigger wind speeds with scale. In particular square-cube scaling (wing area vs mass) lends to this, but also other effects maybe. A scaled down build will never fully represent a really large one

From what I’m seeing the only scaling factors are Reynolds number and square-cube scaling for kite area vs mass. So smaller sizes are better wrt square-cube, larger wrt Reynolds number. I wouldnt expect any issues from zero to 100 kW output, after that who knows.

When going so small, you eventually run into problems of miniturization. You can’t find components of a size to match a really small kite. Also, building small and sufficiently accurate becomes harder.

Though I did estimate power and cost, it must be said that these are very rough at this point. In particular the polars of these model aircraft is unknown (lift vs drag). And as you see I have only included a few necessary components to gauge the total cost.

I think it’s a good idea to choose rather low rated power windspeed. It will also allow you figure out how to limit power sooner rather than later

The Pyramid-Raven shares a lot of similarities to the Tethered Wind Turbine - Wind Cather we are working on - 0.1 m^2 wing area per blade. Current gearbox rated at 33Nm. Nominal RPM 135. The radius is obviously different. It might make sense for you to use a synchronous belt for the high torque stage as well and a lower reducer.

As will also be true for a larger scale version - motor and gearbox will be/should be the most expensive components so it makes sense to utilise these to the greatest extend!

The wind catcher has hub height ~ 3 m while «The Pyramid» should be around ~ 5 m. The amount of building materials though is similar maybe favoring the «Wind Catcher».

The WC obviously a lot more robust through simplicity.

So though «The Pyramid» looks good to me in AWE terms, in comparison with HAWT things still look tough. And HAWT already scales beyond what we can reasonably expect from AWE…

I probably wouldn’t want to do without ailerons and a rudder and I wouldn’t want to make it too small. I’d go with the larger motor myself so I knew I wouldn’t have to go through the trouble of buying or having to design for another motor if I wanted to make it a little bigger. I’d also look at the used market to see for how much you could sell your components again, if it came to that.

Isn’t this a bit like trying to balance a pencil versus a broomstick, the larger you make it the easier control becomes? And the smaller you make something and the quicker it rotates the more difficult it becomes to balance?

Do your gliders need to be super light? If not, maybe there are 3D printed plans available that should be, or could be made to be, stronger.

What are the other significant electronics costs?

It may not be best as an AWES but is it best at answering questions about the potential of AWES?
If so, it can answer . . . What’s the best mix of land, sky and material to generate power by AWES?
Maybe it Sticks another data point on the very sparse map of how AWES perform… Given how differentiated the design is and the general trends toward good the idea follows… That data point can be valuable. Your Pyramid should be able to pay for itself many times over in this case.
It’s just &*%$1^£ hard persuading power companies etc this 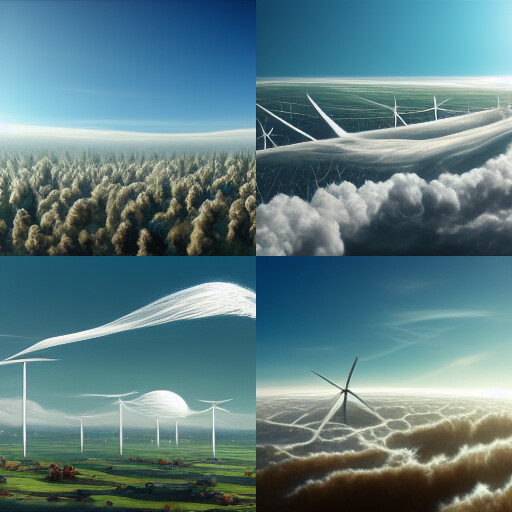 Or you could save yourself the bother and get the AI to tell you
the most efficient mix of land, sky and material to generate power by Airborne Wind Energy

I can afford to splash 2000 € on somethibg like that. The problem is time really. Unless I could free up work hours for a few months I wouldnt get anywhere…

Would your “Plan A” be Kitemill’s “Plan B” then?

Isn’t this a bit like trying to balance a pencil versus a broomstick, the larger you make it the easier control becomes

Yeah. Its hard to know at which scale to start. If I was unemployed I may have time but money is tight. So that would mean going for the cheaper setup initially. If I was working for a well funded outfit I’d go for quality component and outside labour, to save time. The right choice of scale depends I guess…

The option with 3D prints if a good one. It may also allow for scaling and AWE specific mods. I think actually designing for 3D print would not have to be too difficult either.

The point of second hand is a good one. Even better if one could buy second hand and then sell later at the same price.

On electronics you would need a VFD/ESC for the generator. Also I think a drone controller board would work nicely as on board CPU, I guess you’d need radios supporting many to many comms etc.

My plan A is Kitemills Plan A, B or C whatever it takes to make power

Wrt to Kitemill I dont decide the strategic direction, «I just work here». Though I probably have some influence here and there. I still support Kitemills direction no doubt as a worthwhile endeavor.

My interest in «The Pyramid» so far is just a mental excercise which I think has given me a fair share of new insights.

On electronics you would need a VFD/ESC for the generator.

I think Benjamin Vedder’s VESC can do regenerative breaking, and it’s open source so it can be easily scaled to the appropriate size MOSFET’s for the motor/generator.

What will you use as a generator? A rewinded BLDC motor maybe?

I am familiar with the VESC for smaller sizes and it does provide lots of functionality. So that is probably the way forward. For bigger systems, something from Siemens or Schneider Electric will be unbeatable… these things are quite well known, so no need to develop in house IMO unless you are producing lots of units.

So is it fair - to answer in short

If you put the attachment point at the center of lift then your triangular bridle provides no benefit to the bank angle if I understand things right. Something like this was talked about before. I wonder if you need to change the attachment position during flight. Consistent and correct attachment point placement across all 3 gliders anyway seems easier with larger gliders.

Maybe you could mitigate problems with attachment point position by making that less of a pivot point by, if you’re going with variable bridle diameter, running the tethers through tubes attached to the kite instead of just through a ring. Tether tension then may keep your bank angle, and pivot angle, within bounds.

The triangular bridle would be attached at the tether attachment point under the fuselage allowing the kite to roll a little bit into the turn, and a lot out of the turn

The triangular bridle has the purpose of ensuring a given radius and aligning the speed of the three kites. Roll control would be used just to generate net forces perpendicular to the centerline of rotation