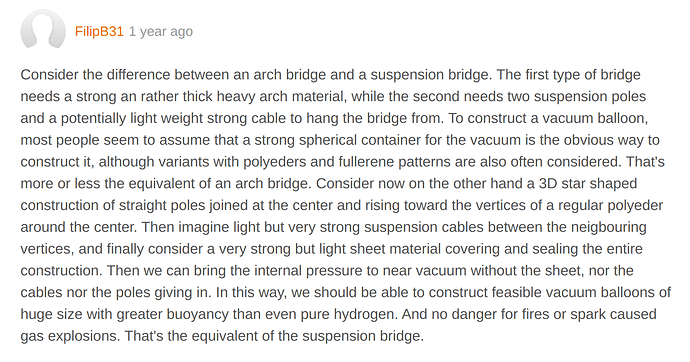 It seems a star / suspension-bridge design as opposed to a shell might be much more structurally efficient and easier to build. This image is from a patent that uses tension and cross-beams to prevent buckling of the primary compression members. https://t.co/Ie5gQ9WK2G

Consider the Hunt GravityPlane. It uses helium for passive lift, then compresses the helium to glide forward. This would be even cheaper to operate than a traditional airship with zero fuel cost after it's built. cc: @BrianRoemmele @jacknasjaq https://www.youtube.com/watch?v=tPbu5UeW4uk …

Where they identified a potential for application in Airborne Wind Energy

Airborne wind turbine idea seems interesting. Before Joby Aviation, they were Joby Energy and trying to do this. Various other companies have tried, including Google X Makani, which Google recently shuttered. ...none of them had vacuum balloons. https://t.co/yI9dA7VmK1

Consider the Hunt GravityPlane. It uses helium for passive lift, then compresses the helium to glide forward. This would be even cheaper to operate than a traditional airship with zero fuel cost after it's built. cc: @BrianRoemmele @jacknasjaq https://www.youtube.com/watch?v=tPbu5UeW4uk …

Its a mindblowing idea. Though my initial thought is that these must never be built, because of the potential of polluting the atmosphere.

An old article (2003) about the Hunt GravityPlane: Let’s make it whackier instead.
Why not build a self compressing plane body
Like a tube with hoops front to back filled with buoyant gas… To deflate wind in a line front to back so the plane body becomes a bit sectional like a worm… or shrink each of the rings with a central tether winder.

I dont know if we want to go there, but maybe harvesting mois in the air for bouyancy is a better option than compressing air?

Anyways that discussion is moot with kites as we have the tether, and with planes until you can first make it float weightless…

So lets make a guesstimate of how this buoyancy could work for a delta kite. Lets assume wingspan 30 meter, thickness avg. 1.0 meter, chord 4 meter. This gives us wing area around 120 m2, volume 120m3. That would put buoyancy lift at approximately 60 kg, considering 50% efficiency of vacum balls weight/volume fillability vs pure vacuum. The skin of the kite using eg. 400 g per m2 layup would amount to more than 96 kg. Then you need all the rest. So at this scale it would not work so well. I guess somewhere around 70-80 meter wingspan it could become viable, or a kite with reduced net weight force could also be viable…

Now, if you could “capture” vacum in a material that would be lighter than air and at the same time provide some compressive resistance (being a foam replacement inside the wing), then youre talking. But such a material would probably be invented first for aircraft use before it found its way to AWE, so thats probably still some years/decades/centuries away.

Consider the Hunt GravityPlane. It uses helium for passive lift, then compresses the helium to glide forward.

I hope everyone here is able to debunk this perpetual motion scheme for transportation. If not, get educated.