Just putting this (probably useless) design out there to block patents: 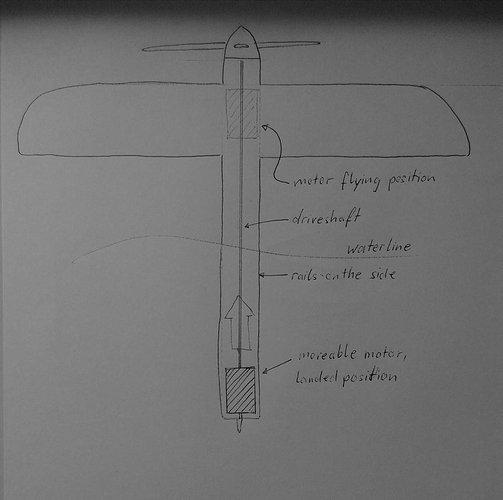 If i understand correctly placing the motor in the rear for vertical flight will not give you stability, but it might give you controllability. For controllability (and be able to stabilize orientation during VTOL), you would need some horizontal actuators in the XY axes during.

You might be able to do that with ailerons, but it seems to me you will probably have difficulties flying in high wind

(Edit: missed the waterline in your sketch. Ill have to reconsider based on this. This seems similar in thought to eg. Ripple Aerospace)

Don’t see much similarity to sea dragon / serpant. There is no need to shift the CG / buoyancy with rockets.

Another idea: add holes in the back to let water in and out. That also allows you to make it neutrally buoyant so you can store it underwater during rough seas, or generally.

Had that underwater storage idea as well. If one can store it underwater the buoy design isn’t neccessary.
(A depth of 0.5 of the wave length should be sufficient.)

Letting water into the back would require the motor to be watertight. Not impossible but that’s what I tried to avoid in this design.

If one can store it underwater the buoy design isn’t neccessary.

It isn’t? How do you takeoff then?

Another idea: fixed attachment point for the tether, but the tether goes through a sliding ring to change bridle position for storage, launch, and landing. Store underwater, or not.

Letting water into the back would require the motor to be watertight.

You’d make separate compartments for the water. This isn’t an issue with the rotor above the waves? I’d think water would come in regardless, unless you made the important bits watertight.

How do you takeoff then?

There are different possible methods.
Have a winch pull on the cable, control underwater daving and jump like a fish.
Just use the propeller to fly out of the water.

This isn’t an issue with the rotor above the waves?

There are different levels of water-tightness. Air propellers rotate faster than ship screws. Including shaft-liners probably comes at some cost. And if the system is flygen any losses get multiplied.