What's the story with kite-reeling?

This topic is not about you. It is asking how are things going with kite-reeling.

Doug, you started with my “domain expert” status here. I provided the best overview of reeling until you lost the thread.

OK back in your cages boys.
This is a forum for content on Airborne Wind Energy please.

We all know Ampyx… yes… (?who)
Oh Yeah… a real reeling company… They’re serious about it as their honest appraisal of their tether system suggests…
https://www.ampyxpower.com/ap3/tether/index

The tether is composed of DSM Dyneema fibers (Ultra-High Molecular Weight PolyEthylene) that are braided into a rope. The tether is designed to withstand the loads that are experienced during all possible environmental conditions! Although the tether may look like a simple system, there is more to it.

The tether is a potential source of noise and air drag and is characterized by different fatigue mechanisms. The bottom 200 meters are continuously exposed to bending cycles over the drum causing internal friction and wear. The top part of the tether is exposed to varying tenstion cycles (creep fatigue) and contributes the largest air drag. To obtain the proper AP3 tether a trade-off is made between noise, drag and cost.

The horizontal progress indicator underneath the figure shows how far along the production and testing of the AP3 tether is progressing.

So I guess it’s safe to say that nobody knows anything about the status of the most commonly pursued AWE method, right? Nobody knows a thing? Zero information from any project or team?

The test “will I get an answer on the forum where there are five regulars with interest in awes, that is satisfactory to me” is not really indicative of the progress in kite-reeling (or yo-yo as it’s called most times).

What evidence would you like to see to be convinced, that kite-reeling is a viable awes architecture?

Normally in wind energy the first test is showing power output.
Then, energy collected over time.
Then, if costs can be contained, it might be competitive.
I would be happy to hear ANY info. Silence is not a good sign, in my experience.
You notice they are very talkative right up to the point when their stated grid-feed projects are scheduled to begin. Then, sudden silence. I guess we’re left letting the silence speak for itself.

Why not trying reeling in SuperTurbine ™ style? 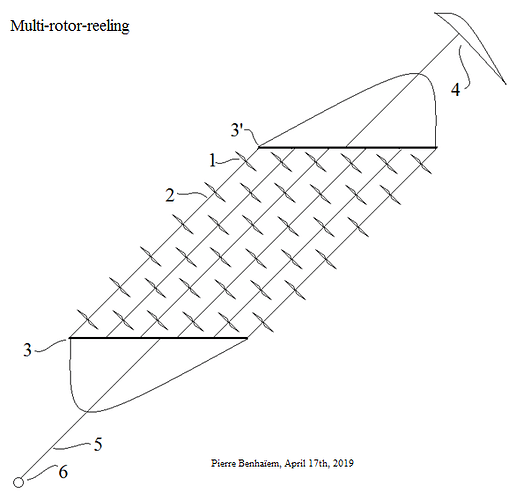 Multi-rotor-reeling.png604×568 36.2 KB
Yoyo system comprising a ground station (6), a main tether (5), rotors (1) on their respective tethers (2). Said rotors (1) provide thrust. The separators (3, 3’) allow to avoid collisions between the rotors (1), so allow to maximize the space even by using small elements like the small rotors (1), avoiding mass penalty. A kite lifter (4) provides a permanent lift.
1 Like
Tether(s) as element(s) of structure
Turbine Orientation
kitefreak April 17, 2019, 2:54pm #41

OK back in your cages boys.
This is a forum for content on Airborne Wind Energy please.

Ok Rod, sorry I came back. Doug, the New Forum is all yours.

So you, as a self-described (To Peter Harrop when demanding a free copy of his “report”) AWE “domain expert”, have NO information on the status of the most popular (how can a million floes be wrong?) style of AWE being pursued, is that right? People like you can’t even grasp that Peter Harrop’s opinion is irrelevant, let alone your own. Ignorance analyzing ignorance - wow.

You know it would be nice if, when one replies to a comment, the reply would appear nested / indented after the comment to which it pertains, rather than just appearing at the end of a long list of comments. This is to Rod and Pierre where Pierre said there’s no kite-reeling system in regular operation because nobody who owns a house would know where to put it, and Rod agreed it was a “fab reply”. Reminds me of daveS’ “concert that never happened”, where fans of the idea of AWE are so far into fantasy-land they can’t even figure out that implementation of a working system requires such a working system to exist. OMG I feel like I walked into an insane asylum!

What's the story with kite-reeling? Industry and Market Analysis


Doug, this comment was about the topic, not about another comment. And please read the answers, of which Rod’s you mention, playing the signs in the top and the right of the quotation to go to the comment itself then the answers.
PierreB April 17, 2019, 4:43pm #46

Doug, the comment you allude about house is on What's the story with kite-reeling? and Rod’s reply was not about this comment, although it apppears just after. In fact the reply for this comment was yours. You can verify it.

The comments and the replies are well indicated.

A post was split to a new topic: Disruptive Innovation

sorry didn’t follow the whole conversation, but what is kite reeling? is this the same as pumping mode?

thanks! I don’t see a problem with kite reeling. I think most AWE companies/research facilities pursue it, Ampyx, Kitepower, and fly on regular basis.

Terms: flygen aka.: makani-style, turbine on a kite groundgen Any system where the generator isn’t airborne yo-yo aka.: pumping mode, reel-out/in, kite reeling torsion-transfer transferring the torsion to a generator on the ground ropedrive Using a circular rope in the way of a belt to transfer power to the ground. Acronyms: awes - airborne wind energy system aoa - angle of attack

Kite-reeling is perhaps the first thought a natural tinkerer has when flying a kite. It goes something like: “Gosh it sure would be easier if this reel were powered”, transitioning to “Heyyyy, wait a minute… What about a reel that MAKES power!!!” Which places the least-effective type of wind turbine, a Savonius, into the sky, except the kite can fly crosswind as it reels out, so it is moving downwind, but veering around - not as bad as if it were just traveling straight downwind. But like the Savonius, it makes no power on the upwind cycle. And worse than a Savonius, this makes most kite-reeling systems intermittent. So the questions are, in spite of these factors, is it showing promise? Or is it working well already?
The reasons kite-reeling is so popular are
a) it was so easy to think of - almost invented itself;
b) the kites are available off-the-shelf
So it is relatively easy to understand and implement, even for beginners, within the time constraints of academic calendars and getting a graduate degree.
The question was never “Does it work?”, because it is so simple that it HAS to “work”, but, there are unlimited configurations that could return SOME electricity from wind, at SOME cost. The question is, is it WORTH doing? Does it return enough to matter? Enough to compete with alternatives? If not, does it show promise that it can in the future? With further development? Is it “looking good”? Is everybody high-fiving, or are they going home frustrated and disappointed? So I guess, given the number of teams trying it, and the generous budgets, and the announced grid-feed projects, the question for AWE people is “HOW is it working?” Is it just barely scraping by, or is it performing phenomenally? Is it being run every day, or is it just dusted off and taken out occasionally? Normally in wind energy, long-term operation is required to show survivability and long-term reliability. A single operating period of an hour or two is nice to show performance, but if it only lasts an hour before breaking, even the best performance is still not enough. So it would be nice to hear some details. Also, when a company is providing lots and lots of (extraneous) details, then suddenly stops when the details that actually count are scheduled to begin, it suggests maybe the silence is evidence of a problem, since they were so happy to share info until power was supposed to start being generated.
Also, why is there still no facility powered by kite-reeling? Why is there no daily grid-feed from kite-reeling? It seems that any company would be happy to publicize such daily operation or daily grid-feed, if it were taking place, given the amount of detail they go into while just preparing for grid-feed operation. The silence seems conspicuous. No products for sale still? Why exactly? One might assume that a successful and happy testing program would be hard to stay quiet about. After all that work, and all that pre-grid-feed hype, you would assume good performance would be irresistible to brag about - just a little bit. Maybe someone knows more and can fill in some details.
When I ask “What’s the story?” it’s an expression of curiosity derived from a strong interest in AWE, and a response to the ample information disseminated by high-visibility teams (bragging ahead of the fact?) as they prepare to feed the grid, contrasted with the common “news blackout” that emerges, pretty-much on schedule, the moment that grid-feed is scheduled to take place in the AWE world. This seems inconsiderate to the fan-base these companies slowly build up, only to abandon them when the hype is expected to transition to a reliable, economical grid-feed power-generation project. It also seems intellectually dishonest, since in science and engineering a negative result is still a valid result that should be communicated. It’s like they write and produce a TV drama, but just as the show is supposed to be having its happy ending, the screen goes blank. At that point we may never hear anything from them again. Which leaves us wondering “What’s the story?”

That is so poetic.