Death to "Soft vs rigid"

Yes, I can find a dictionary for lexical data to distinguish “recycling”, “pollution”, “scaling”, and “robustness”.

But not “data supporting”…

We must speculate that the rigid wing AWES developers do not have more than a few hundred hours of logged flight, since they do not provide public logs.

Speculation is not the same as statistic.

kPower counts both numbers as best as it can. For example, we are trying to wear out soft kites in our quiver, and have yet to log a Major Failure that could not be repaired promptly, cheaply, and easily. On the other hand, Makani conceded the Norway M600 crash was a total loss, so that’s a solid MF. We know they have few total flight hours.

I would argue the technical advance Makani demonstrated last summer is yet unparalleled in AWE. It would be petty to ignore that just because all of that complexity lead to a too soon crash.

I dont think a crash in the sea would necessarily mean that the kite would be broken into smaller pieces that could not be recovered. And I would be thoroughy surprised if they sank the debris rather than bringing it home for analysis.

We both, and surely Makani also, hope that we may see good MTBF numbers from Makani in a few year’s time. But right now MTBF makes little sense… first perhaps look at maximum flight time. Once that number is larger than a few days, one could switch to reducing MTBF.

After 300M USD investment, and >10yrs trying, its highly significant that Makani cannot use MTBF as a success metric. At least TRL9 power-kite MTBF is nothing to be ashamed of.

Yes the M600 is “unparalleled in AWE”, just as Maxim’s failed aircraft was. These are “hopeful monster” cases with not much hope.

Key missing data is M600’s power curve. I have long predicted this data will reveal weak net power due to over-scaling. Had the power curve metered well, it would likely be touted.

Small rigid kites can be arrayed in massive soft overall form with tether networks.
Best of both soft and rigid worlds.

I really like the approach Makani have taken… Spending many millions of dollars on airborne wind energy. Sure wish I’d done it.

Rod, You should also like how the Wright Brothers did superior aviation R&D, with almost no money compared to rivals. Makani’s millions could have been far better spent by spreading them to every major aerospace school on the planet.

I was there on Alameda Island, when Makani popped up. It was actually a nightmare. Poor Corwin was killed by overwork. It was all doomed to failure. Look what two crashes is doing to Boeing. Makani cannot stop crashing, nor keep crashing. GameOver; the money was a trap.

The soft kite is resilient against crashing. Rag will win.

I was there on Alameda Island, when Makani popped up. It was actually a nightmare. Poor Corwin was killed by overwork. It was all doomed to failure. Look what two crashes is doing to Boeing. Makani cannot stop crashing, nor keep crashing. GameOver; the money was a trap.

I mentioned this before, but I don’t see how talking bad about Makanis work is going to promote AWE. So please just stop. If they are going about things in the wrong way, they will fail. It doesnt really matter for the rest of us. I dont think anyone is interested in you further opinions of what Makani is doing wrong, beyond what you have already supplied in quantities.

You should rather focus on your own progress, or the progress of a group effort you actually support. It seems you have a lot of answers, while at the same time a deep understanding of everyone else’s errors. So just show us a working design already, or let everyone else figure out things in their own way

Our high performance airframe structures literally explode when overstressed, with lots of small debris. Here is what an advanced aerospace rigid wing looks like when it cracks up over water. 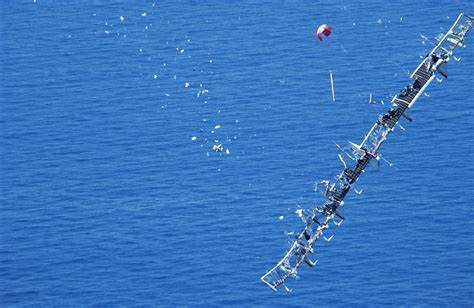 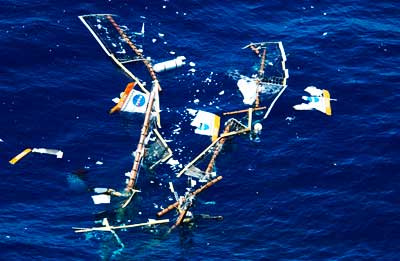 Very messy. At least the fabric drogue survived intact, and can continue to be used. This is what fabric kites have to beat, by being well maintained and recycled in one piece at the end of their service-life.

That’s the ultralight solar plane. A rather exceptional plane.

Yes; large rigid kites are “rather exceptional” in precisely the same way. In fact, Paul MacCready, designer of Helios, moved into AWE R&D shortly before his death. Paul was an honored panelist at Drachen Foundation’s historic 2004 AWE Conference (HAWPcon09 being the first large international conference).

Rigid kite designers face the same engineering trade-offs Helios did, with the same structural materials and failure modes. If a large rigid airframe is made strong enough to survive turbulence, its too heavy to fly well.

The planes are safe and yet they are rigid. So it should be the same for rigid kites. But this would be without taking into account that the operation altitude of an airborne wind energy system corresponds to the altitude of an airplane during the takeoff and landing phases. In that altitude air masses are disturbed. Imagine the safety of a rigid AWES taking off and landing 24 hours a day, all year round, by taking also account of the rope connecting it to the ground…

AWES will someday be as safe as commercial transport aviation; which took decades and countless billions of dollars; and took thousands of lives, the cost-in-blood for modern aviation safety culture to triumph.

AWES will someday be as safe as commercial transport aviation

There is no barrier, except for the time required to perfect the engineering. The wings will be both soft and rigid, and mixed together. The Race to AWE will be over; the Age of AWE will begin.

Modern aircraft operate closely over populations, and so will AWES.

Likely no, due to the tethers, and by admitting that AWES can have a significant future in wind power production, which no one can prove after 10 years of R&D and funding. Taller and taller ground-based wind turbines could more likely continue to be successful.

“Safety Tether” is a proven idea. Tether design is a safety factor for those who engineer accordingly.

Tethered glider operations do occur in populated areas. So do kite festivals. Look at ship mooring in the world’s ports. Look at utility wires overhead. No problem. The key is topological stability of two-anchored segments. We have filled the sky with tethers various ways before- 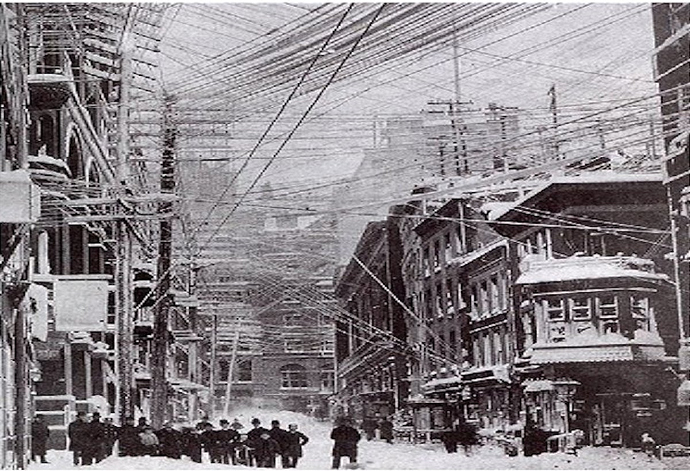 Give it time, that engineering time is the transient barrier for AWE to succeed.

So do kite festivals.

In kite festivals, large static kites are massively used. Even small crosswind kites fly in their zone.
Concerning the photo, I do not see how the currently most complete prototype of any AWES (Makani’s) and similar rigid or even soft AWES could work in a forest of ropes such like on the photo.

Instead of criticizing Makani, try to find realistic solutions, like for example a mean to allow Payne’s patent US3987987 figure 5? facing all wind directions, excepted by moving anchors by using cranes or ships which are unrealistic solutions.

Its best to both expertly criticize Makani’s failings and identify more reasonable solutions. Its understood that the EU venture club, at its increasingly exclusive conferences, has developed warm feelings for Makani that do not exist in the US, with no more conferences.

Rod’s notion, that cranes may be more than just a dynamic anchoring similarity proof, is his to develop. I think the ground surface itself is the only anchor belay medium needed.

Giant buoys are somewhat like ships, and could comprise an anchor-circle, but offshore is currently just a concept for dangerous kiteplanes to avoid populated areas.

Architectures and companies often evolve from soft to rigid. If some scheme allows the wings to work in tension, the rigid elements could be thin and light. Perhaps there are some possibilities for Centrifugally Stiffened Rotor (CSR) as a model for an AWES? or some other Multi-kite airborne wind energy systems (MAWES).

The modern power kite evolved from rigid wings. Jalbert copied his Beechcraft wing. Evolving in the other direction is backwards. Evolve in a cave, lose your vision.

Regarding hybrid rigid-soft wing networks: there is the small personal AWES scale of rigid power wings around 3-5m paired to soft lifter kites of similar mass, that make great sense.

For the largest energy kites, soft wing design will tend to predominate, for all the well-known reasons. What are advantages or necessity is there for comparatively tiny rigid wings in a network?

Maybe there is a place for vast networks of tiny rigid wings, but all the thin kitelines between them would be easy to mess up. Fewer thicker ropes are favored.

The golden ticket for rigid AWE wings is vast flocks of small untethered IFOs. These could coexist with or end an era of giant soft wing AWES domination.

Again, “Death to “Soft vs. Rigid”” is about using each wing design alternative in its proper places.