Let’s agree AWEurope leaders are not intending to buy into anchor-shifting AWES concepts based on USP3987987fig5.

Fraunhofer is the true high standard in EU AWE engineering R&D. AWEurope does not compare well, by any serious measure.

The Tri-tether avoids anchor-shifting (anchor belay), if wanted. Its ok if AWEurope cannot afford to research these methods, kPower does.

The key inventive leap in these powerful crosswind schemes is to use Earth itself as a dynamic anchor-field. Multiple-point anchors are cheap compared to previous schemes that required carousels or tracks for similar gains. 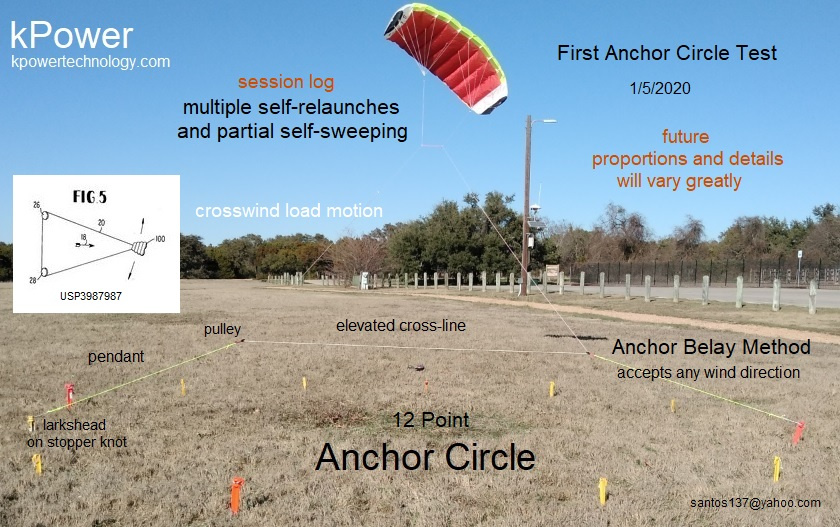 Again this conspiracy thing. Man you are weird! Well anyway. So you perform a test. I saw a video. Looks like really unstable. So what were the results? Why not try producing electricity and quantified it? A power meter is 8 euros on Amazon

It looks like some possible progress.
Some observations and questions, then a suggestion:

As the “future proportions and details vary greatly”, the diameter of the Anchor Circle should be (about 10 times) far larger compared to the kite size, that in order to allow the kite making fast and long crosswind trajectories and sweep more.

The FIG. 5 part seems to be within the installation, going from the two pulleys toward the kite, the pendants and the Anchor Circle being the added parts.
So the two pulleys look to be on the ground, not in flight, is it right? Are they anchored on the ground? If yes you have to move the two (FIG. 5) pulleys when the wind direction changes, while in the same time
you should detach the pendants from the anchors to reattach them to the two appropriate anchors. How is it possible without human intervention?

I like the idea of including a crane in our designs…
The one highlighted above looked too wobbly and wouldn’t work well as a kite handler for launch and land assist.

Think of the energy vault system.


It has a lot more capacity for anchoring the crane ends to the ground, and making them good as kite tether working points… All those wider out blocks could be handy for
Adding more rails on the same beams for kite handling might help.

Problem with USP3987987fig5 though
is you want those pulleys at the side to be really wide for long stroke so as to avoid reciprocation in the whel direction. Not sure a crane in the middle can service that.

Its uncertain just what happened to AWEC, the insiders have never disclosed the process. Olivier may be right to suggest it was a “conspiracy”, but until the actual facts are public, that’s just one guess.

The latest experiment was not for measuring power, only for operational research. John Borsheim. PE, made kPower’s first AWES power meter in 2008. There is little value in a single data point in low wind, what counts is full power curves later. Due to low wind and no load, this was a <10W class performance by the 1.8m2 wing, mostly just to fly and lift the lines.

Its a wild leap from seeing cranes as one of a long list of load-connection models to thinking we need them on a kite field. The experiment was aimed at showing how little hardware is needed. Alpinists do not need a crane to climb mountains by anchor belay.

The rig shown by the Figure 5 and some variants might not fully use the pulling force of the crosswind kite, which would decrease the potential compared to the (yoyo, reeling) pumping mode.

Its going to a matter of testing Fig5 configurations against reeling AWES, testing-diligence none of the reeling players are interested in. Its not enough that only kPower has tested Fig5 prototypes and makes its claims accordingly.

Fig5 favors the power kite most of all, by eliminating the upwind cycle. Reeling favors the kiteplane that can glide quickly upwind. Its a complex “soft vs rigid” contest.

Death to "Soft vs rigid"

I think the ground surface itself is the only anchor belay medium needed.

How does it work in automatic mode?

There are many variations proposed. For example, massive autonomous anchor vehicles that move as needed, or cars on tracks.

To me, the most wonderful option is to be on a pioneering kitefarm pilot team, and get out there and belay giant loads like industrial workers do, while automation eventually catches up. Imagine “manual” sailing in the sky, on an epic scale. That’s a better job than automation programming.

So apparently there is no mean to make the anchor belay medium to work in an automatic mode as I asked. And cars on tracks lead to an expensive and complex carousel.

No Pierre, there are already massive mining vehicles with autonomous-driving modes. Its true that rail-tracks and carousels are capital intensive, but they are readily automated too. 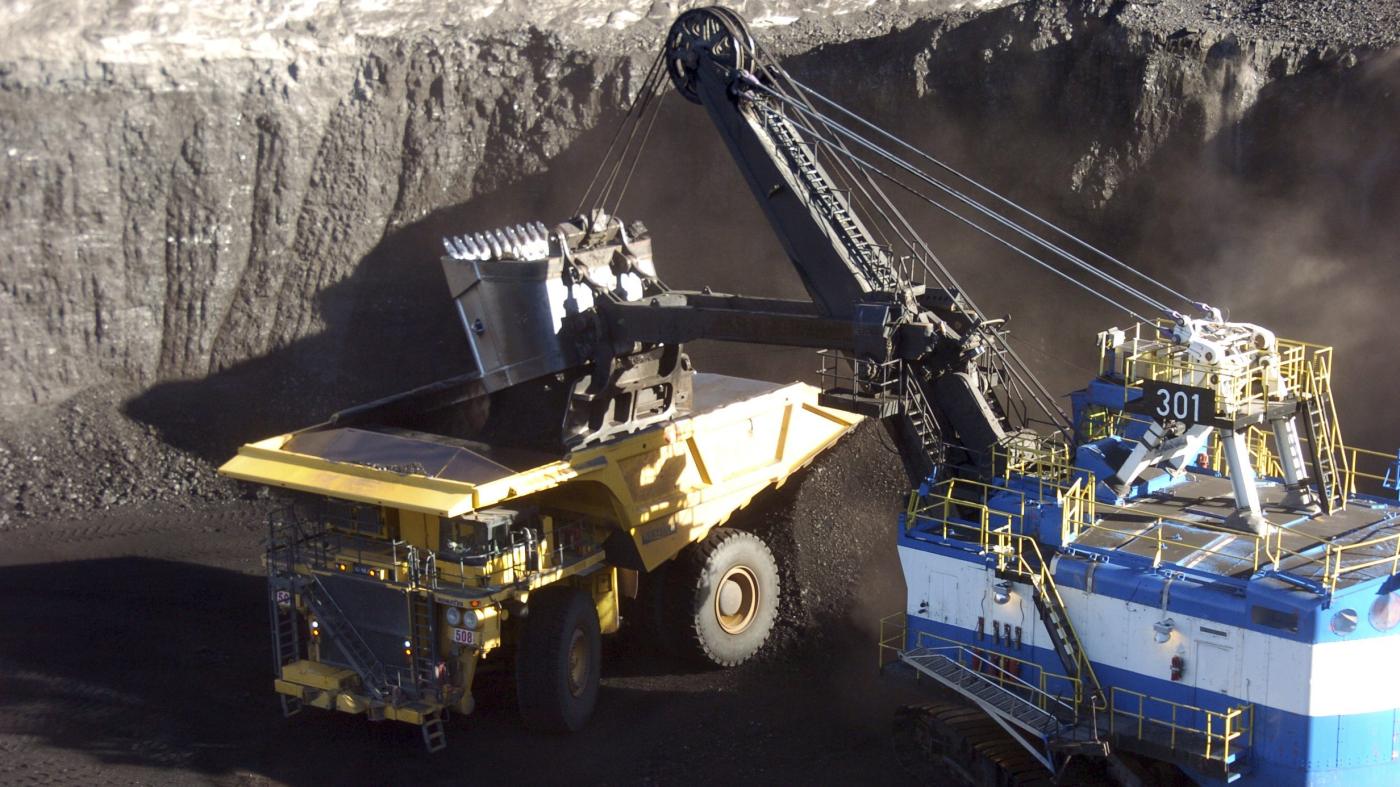 "The fully automated mine has long since passed the days of concept and evolved into a reality."

Again, the tri-tether is Fig5 in 3D, and eliminates belay while accepting wind from any direction.

As a temporary conclusion of this topic, and spite of my initially rather favorable opinion about the studied system, some bottlenecks occur such like the pulling force that is not well oriented or the added devices to allow facing the wind directions. And the implementation is rather complex compared to the pumping mode. So building them looks unlikely.

Again, the tri-tether is Fig5 in 3D, and eliminates belay while accepting wind from any direction.

Again, we must add the cosine concern to the aforementioned problems What is possible with Payne's patent US3987987 figure 5? .

Pierre, Fig5 is far less complex than Makani’s architecture, and many schemes you have favored, like OrthoKites, WheelWind, and RotatingReels. At least kPower can handle the obvious low-complexity, by developing the methods diligently-

The real complexity crisis is active flight automation of single-line flygen and reeling in breakaway-mode. Fig5 passively retains the kite if one line breaks. No flygen or control-pod dependencies and vulnerabilities. This inherent simplicity is what Low-Complexity AWE is all about.

Pierre, Fig5 is far less complex than Makani’s architecture, and many schemes you have favored, like OrthoKites, WheelWind, and RotatingReels.

I critic my own schemes as well.

The real complexity crisis is active flight automation of single-line flygen and reeling in breakaway-mode.

Active flight automation would likely be required, whatever the used scheme, even if some level of passive control is highly desirable.

No one is arguing that the passive-control kite schemes should not have automation when it is available. Its just not yet available, but kite pros manually fly giant kites already. I like both manual and automated AWE. Manual is more fun, less pain.

Fig5 is less complex than virtually all other schemes, by standard metrics of engineering-complexity (part-count, state-space). Fig5 is the simple original idea in the Low-Complexity AWES design space. How grand it will be to fly 1000m2 power-kites hands-on, before automation is ready.

Makani’s architecture is the prime example of High-Complexity AWES thinking, where flight automation is an inherently critical requirement. No great RC pilot wants to be at the joystick crashing an M600. Better to hook up computers and blame programmers, never the mistaken architectural down-select.

I will qualify my last remarks. The favorable development of the Figure 5 does not seem obvious to me. However the tri-tether configuration as conceived by Dave deserves to be investigated. There is a picture below and some links about a tri-tether rig: 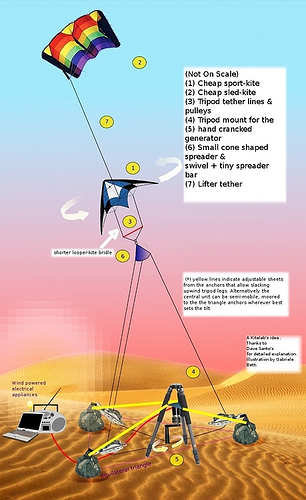 The figure 9 represents the curve of power for a 20 m², 5 kg paraglider at different wind speeds. The value of 6000 W at 9 m/s wind speed is about from 60 % to 75 % the expected average value for the same kite in pumping mode. The continuous power can compensate the lower value. Other advantages can be expected such like a better safety thanks to the three tethers.

My Tri-Tether work was precisely the “favorable (3D) development of Figure 5 (2D)”. I must give credit to Payne, who lived in Annapolis, MD, where I also lived, back in 1975. JoeF and I are in occasional contact with the family. We propose Payne’s (and McCutchen’s) estate(s) someday be compensated, as the inventive contribution is recognized, never mind the patent IP has expired.

However the tri-tether configuration undergoes some losses when a not perpendicular wind to any side of the triangle occurs.

The tri-tether configuration leads to serious cosine losses for some wind directions as shown in the sketch below I put again.

My drawing was not accurate as the kite moves in loop.

The value of 6000 W at 9 m/s wind speed is about from 60 % to 75 % the expected average value for the same kite in pumping mode. The continuous power can compensate the lower value.

In fact I extrapolated from idealized values of a pumping kite. The paper linked above specifies that both are comparable in term of expected power. We will know better if tests are made.

My Tri-Tether work was precisely the “favorable (3D) development of Figure 5 (2D)”.

Thanks for the precision.

There is an extra tuning parameter to tri-tether rigging that enables optimal crosswind load-path geometry. KiteLab Ilwaco solved this state-of-the-art advance from the start.

Don’t lose sleep over whether fig5 is a major contender in the AWE Race, despite the fact no AWEurope venture has yet tested the idea.