For a given kite, what is the method to extract the most power?

Usually I would take into account the Power to space use ratio but this time the “game” is to determine the maximum power by kite area according to different methods.

The topic on How to calculate the power generation from the given kite size? Approximation. is based on the traditional calculation from M.Loyd’s model, leading to a theoretical equality between flygen and yo-yo methods. For both we have a power of about only 4/9 of the potential of the kite (perhaps even less) as a result of the loss of speed by the propeller drag (flygen) or by the swept area going downwind (yo-yo), assuming the speed becomes 2/3 from the initial kite speed.

The loss with an hydro-turbine could be equivalent to the loss of a flygen, if there is no other drag than the drag from the hydro-turbine.

Concerning yo-yo method the time of production is about 1/2 the total time. So the extracted power would be less than 1/4 the potential of the kite.

Concerning flygen method the extracted power would be less than 1/2 the potential of the kite.

Now other methods such like ground-based crosswind rope drive or straight rail could perhaps extract more as there is no downwind motion (unlike yo-yo) or aero(hydro)dynamic drag to convert wind power (unlike flygen and hydro turbine), the kite motion being almost crosswind. However some losses could occur at each half turn due to the required time to do it. Another option is for the kite to do figure eight downwind like for NTS rail, knowing the loss due to downwind motion would lesser than the loss with yo-yo method (point to be clarified, however).

Payne’s patent US3987987 figure 5 has some similarities and some differences with the immediately preceding methods. I think the simultaneous traction of both pulleys leads to some loss.

Rotating devices can be efficient but don’t use the full potential of a kite due to the limit of the speed, above all the inner side of the kite.

There are other parameters such like the quantity of involved material, favoring yo-yo method (excepted for the generator).

These are rough approximations but this topic could allow to determine a few orders of magnitude.

A rigid definition of a given kite will sway the answer where it is best applied to power generation.

Kite design evolves through iterations of test feedback loops. Thus different teams have found the need to use different kites for their preferred AWES implementation.

If the given kite is a straight span foil tip to tip (as used on rotary ring kite turbine tests) It’s not the ideal kite for the design. But it works well and the difference between the inner and outer tip speed is already not great even at such small test sizes. Straight could be a great kite for the Payne’s patent US3987987 figure 5 As long as you can fly it in a safe controlled way.

Not sure why you say

Hi Rod, it is not intended to favor any scheme in this topic, as only a parameter (power to kite area, or also power to kite weight aloft) is examined. So in the end a rotating device can be better even if its power to kite area is lesser than for another scheme. As the evaluation of AWES is very complex perhaps studying parameters separately can be suitable before testing some configuration.

Yo-yo method (in its basis) has only one ground station, a single line, a single kite, so less material than for some other schemes, excepted for the generator because of the low reel-out speed leading to a low rpm. It is the same for flygen excepted for the weight aloft. Figure 5, ground-based rope drives use two anchors, and straight rails use still more material, without speaking about carousels.

A rigid definition of a given kite will sway the answer where it is best applied to power generation.

Kite design evolves through iterations of test feedback loops. Thus different teams have found the need to use different kites for their preferred AWES implementation.

Indeed the variability of AWES and its adaptability to the environment can be a feature. I cannot say if AWES can be standardized like existing wind turbines.

I would have to say something like: a pair of parallel rail tracks having wagons travelling such that kites are side by side. Wheb reachibg the end of the track, the kite is elevated then returns on the parallel track in the opposite direction. The drag mode kite is most efficient in terms of being able to extract the most theoretically (Betz limit). Having wagons side by side allow filling the sky with wing area. The practical limit is defined also by tether length. But the tether may be relatively long compared to wagon size.

The rail is fixed to one wind direction. The same architecture could be realized at sea by using hydrofoil vessels, though offloading the energy is more demanding to solve in this scenario. I expect a subsea turbine and batteries or airborne cabling would be the most obvious ways to deal with this.

I think a best design will be a combination of high power to kite area and used air volume, and practical use.

So can we discount designs with
huge air volume or ground area use,
huge mass/power,
made purely of wire in the air which need to circle the North pole in the ionosphere to harvest electricity… even though that may bring the component count down

I’d say lift a very heavy weight then drop it. At the instant it hits, there will be a large amount of power, momentarily.

Ground-based crosswind rope drive or straight rail could be used with a crosswind kite flying straight on a side of the moving anchor (board, cart, ship, or nothing with a ground-based rope drive) without figure excepted the half turn in the end of the trajectory, and driving directly the generator. Flying in such a way (sort of “drag” mode?) allows to reach high speed in water (so also likely the same on the ground, using a rope drive or a rail) as for the video below: Now if the kite flies by making figure-eight paths in front of the moving anchor like on the video below (sort of pull mode?), a rope drive or a rail can also be used (see NTS rail, and also Kitegen carousel): Between these two ways (“drag” and pull modes?) of flight I am not sure about which one is more powerful. In the other hand the first one (“drag” mode?) would allow the generator to reach a far higher rpm, so a lesser torque.

@PierreB your point about different conditions, different tensions, different torques raises a question.
Why would we want a kite to generate the most power?
When a kite for a given AWES method is generating maximum power… is the kite on the edge of exploding? Is the AWES on the edge of exploding. (I favour breaking the top most power generating parts of an AWES first.)
Most energy per year. fine that’s desirable.
Whichever method gives us the most consistent power, for a given wind, with the least kite wear and also tolerates a wide wind range … that’s desirable.
The speed sailor was shown wearing a knee brace and only went his max speed once.

@Rodread I try to see if it is possible to obtain a power/kite area ratio which is superior to that of a pumping kite (IMHO less than 1/4 due to both downwind motion and the half time for reel-in phase) or a flygen (IMHO less than 1/2 due to the slowdown by the propellers aloft).

A kite towing a moving anchor and travelling crosswind in a linear path (sort of “drag” mode) excepted the U-turn at the end of the path, using a ground-based rope-drive or a rail (NTS type) installed crosswind, seems to avoid these losses (no downwind motion, no additional aerodynamic loss due to conversion), excepted the significant time required to position the kite after the half turn. And for my knowledge there is no calculation (peak and average power) about the power of a kite travelling crosswind like a kite surf as shown on the video.

And as I suggested this topic is not to determine the “best” AWES but only to examine the power/kite area and weight ratios, above all compared to yoyo and flygen which might be insufficient (high peak power but low average power). I think also the power/space use is far more important and there are other parameters.

The figure 25.1 represents more or less what previously I named a “kite towing a moving anchor and travelling crosswind in a linear path”. Said figure is available on the preview. Perhaps this could be a method extracting more power as the kite flies fully crosswind, without downwind motion, without aerodynamic drag resulting from turbines aloft which do not exist here. 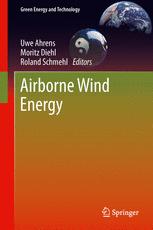 Combining Kites and Rail Technology into a Traction-Based Airborne Wind...

The AWE concept presented in this paper is put into practice by the NTS-GmbH in Berlin. An AWE plant based on this principle—an X-Wind plant—utilizes automatically steered kites at altitudes between...