Why Kites Don't Fly by Peter Lynn (Found in Kiting Magazine 2011 Vol 33 Issue 2) Thoughts on Single Line Kite Stability For a kite to fly on a single line, it must, as the most basic condition, have some way to detect which way is up....

I liked this table a lot.

Also the SSSL 3m2 that I have been flying is not on the list (not a good kite for KAP), but it flies at >67 degrees and pulls ~5-7 kg in 5 m/s wind. That would be 11-15 lbs in beufort 3 I guess. Flying so high puts it in a separate league for soft kites, and it is cheap and packs very small

Both so high pull and flying angle look to do an exceptional combination. This kite would almost be suitable for a non crosswind AWE yoyo system.

Its true. Though no depower at the moment. The kite collapses quite easily for full depower, but collapse is kind of random wrt handling

What would be the flying angle (from 67 degrees in static flight) during reel-out phase?

Note: the optimal 1/3 reel-out speed can be difficult to achieve due to the high flying angle, but I can be wrong.

The intuitive reason is that once you release tether fron the spool/winch, a kite flyibg at zenith will immediately lose most of its power

I experimented a soft kite making small loops on Low radius loop, the force being about 6 times the kite area (power harvesting factor), that is a value close to the maximum value which would be achieved by using a kite of which its area is as large as the swept area by the loop.

The downwind component is the same by using both static (the present lifting kite or Laddermill) and crosswind (small loops or large lemniscates) kites.

Sir,
Can you please explain how you calculated the power from the given kite size? I have a 12m2 Airrush lithium kite and the wind speed ranges from 4-6m/s. Please help me in calculative the approx. power.
Thank you.

Hi. Welcome to the forum!

You can estimate the power of such a kite in this way: we’ll start by assuming that the kite and tethers (at a given length, if you add length performance will deteriorate) have a certain glide number (lift to drag ratio) and a certain maximum pull depending on airspeed relative to the kite. Also you may assume as a start that the mass is zero.

To find the pull, measure the lift of the kite standing still above your head, and at the same time measure the windspeed at the kite. You may deduce the K in the relation between kite force and airflow at the kite:

Next, to deduce the glide ratio, measure the angle between vertical and the kite, also at rest above your head. The glide ratio is G = \frac{1}{\arctan{\alpha}}

The power in a certain wind speed has a upper bound:

You may read a lot more about this in certain papers and the AWE book. But this should be a good start if you want to approach this from a practical point of view.

(Note I fixed on of the formulas.)

Before trying to reply to your question, I put a link about your activity as searcher for AWES.
https://www.daijiworld.com/news/newsDisplay.aspx?newsID=386189.

I think the current topic is about some elements of efficiency of a static kite.
But probably you use crosswind path and in yoyo mode, taking far more power by using figure-eight, leading to a larger swept area and a higher apparent wind. A basic paper about calculation is

A similar result can be obtained by multiplying the force (equation 1 from the paper) with reel-out speed which is 1/3 of 5, so 1.66. The reel-out speed is the speed of the unwinding speed of the rope which is seen as optimal when it is 1/3 wind speed. Cosine squared is 0.75.

Other losses are not mentioned and comprise losses by transmission of irregular power as the power varies within the flight window, by cosine due to the gravity (see the paper)… So one can expect an average of 300 or 400 W.

The power can be measured by knowing the force (using a peson) X the reel-out speed.

@PierreB thanks for your answers. I had done my UG project work in this field without realising these calculations, now I’m researching on this area as a full time research scholar. I’ll look into the paper you have suggested. Thanks!
@tallakt thanks.

I added a note about having calcuclated wrong putting my result up to 600 W more aligned with @PierreB’s value of 1386 W.

For power generation, you would normally want to increase the lift-to-drag ratio and also perhaps the windspeed to generate “serious” energy for such a large kite. If you need to generate energy in as low windspeeds as 4-6 m/s an effective (high G) kite and high power to mass seems the way forward. 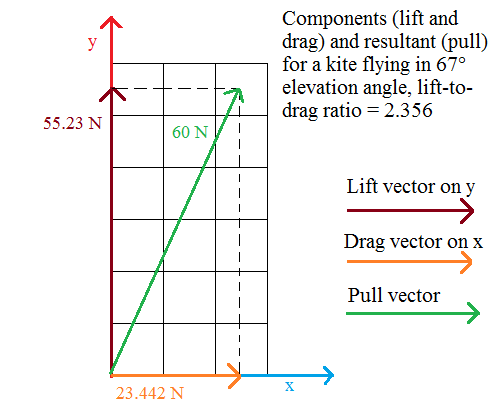 The intuitive reason is that once you release tether fron the spool/winch, a kite flyibg at zenith will immediately lose most of its power

I would add the downwind direction is also more in the center of the flight window where the efficiency is higher.

5 posts were split to a new topic: Using a kite lifter as a low aspect ratio power kite