This is very exciting for me, though I’m not sure if the verdict is good or bad for the Pyramid this time. I am attaching the poster image from LinkedIn for those that don’t have access or dont care to use LinkedIn. Hope we can get the full paper later.

More love for the «hovering» class of AWE then, right @Rodread ? [using my terms at every possible occasion] 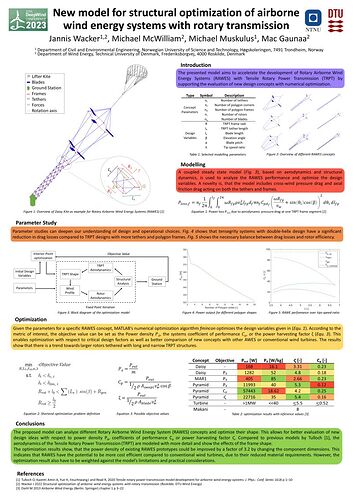 Its a good paper, in particular for master level.

It’s really well written. Very clear.
I think there’s a couple of odd results but in such a complex model with so many relevant factors any decision could throw a spanner in the works.
Can’t wait to gather round, get drunk with you and Christof and argue in a comedy fashion over who’s TRPT is best

One cannot help but think of @dougselsam’s SuperTurbine ™ regarding torque transfer rotary systems, and more particularly embodiment including a TRPT such as represented at least on some figures reproduced below, among other figures (such like Fig. 88) from:

Multiple horizontal axis type rotors are coaxially attached along the upper section of an elongate torque transmitting tower/driveshaft, The tower/driveshaft projects upward from a cantilevered bearing means, and is bent downwind, until the... 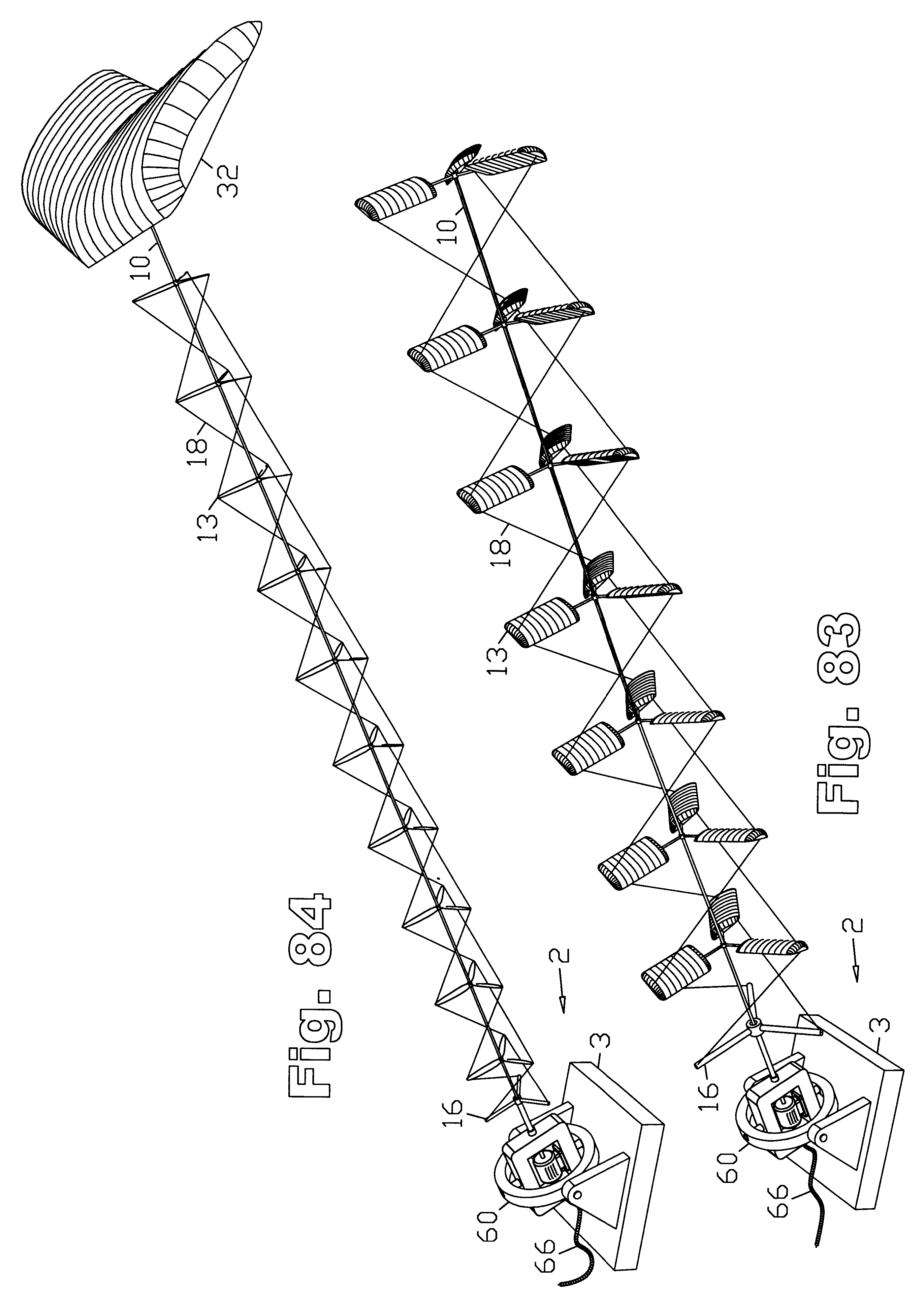 FIG. 84 shows a downwind perspective side view of the sixty-third embodiment, having multiple horizontal axis type rotors connected by helical torque transmitting lashing, a buoyant lifting body, and a directionally compliant base. 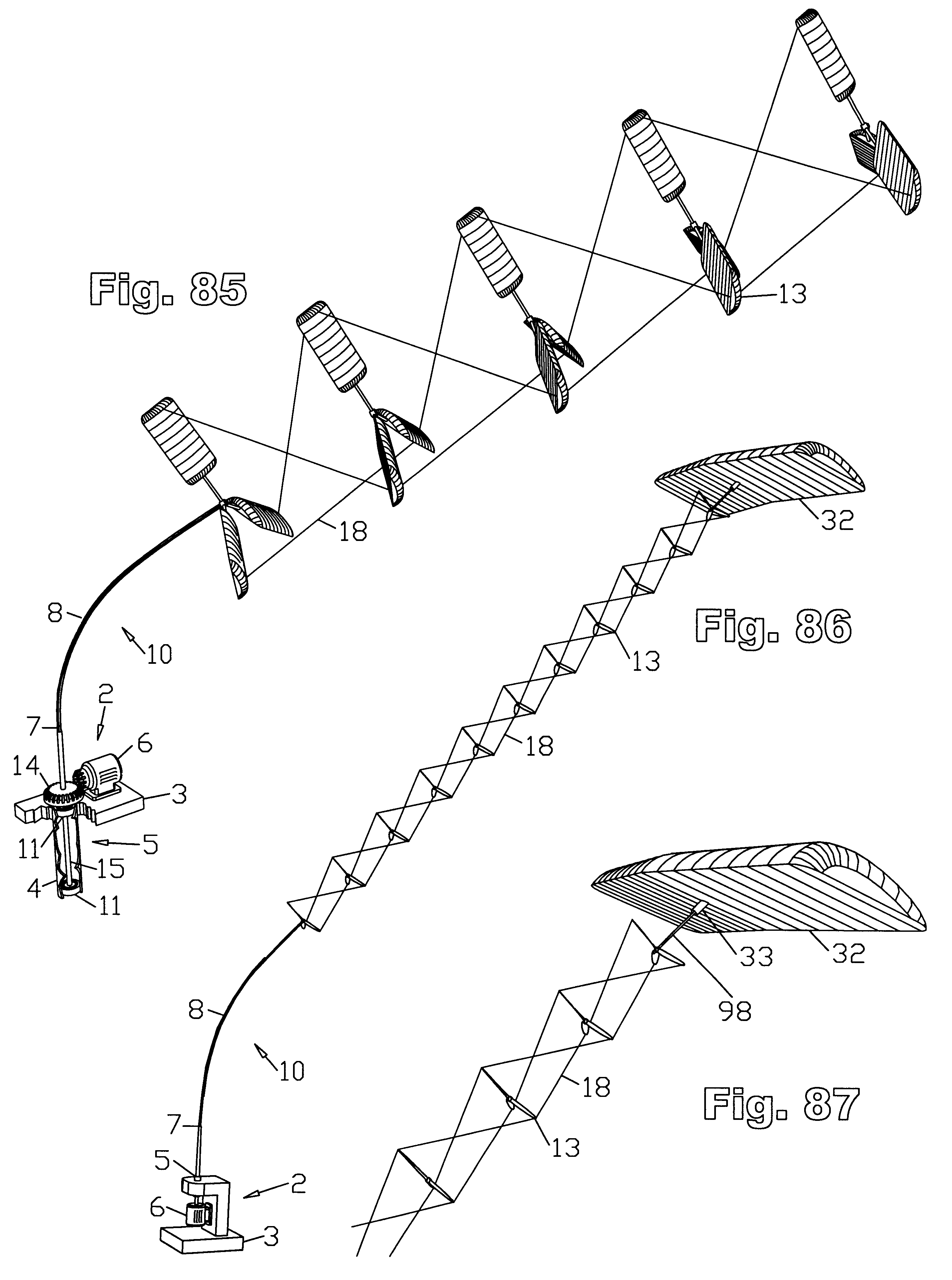 FIG. 85 is a side perspective view of the sixty-fourth embodiment, having buoyant horizontal axis type rotors, held by torque transmitting lashing, with no central shaft.

“…torque transmitting lashing, with no central shaft.” Other terms to disclose TRPT.

I would have liked to have found these elements in the publication under consideration.

Indeed Selsam’s “Auto-Oriented Wind Harnessing Buoyant Aerial Tramway” (towards the end of the long page): then this device was called Laddermill.

Agreed, Doug was the first to apply “TRPT” in kite power .
To be clear - The key difference with Doug’s designs and My Kite Turbines is using blades for rotor expansion and avoiding rigid hub and shaft components allows larger blade sweep area for high speed flight high torque not high rpm

Not to mention Rudy Harburg’s patent: 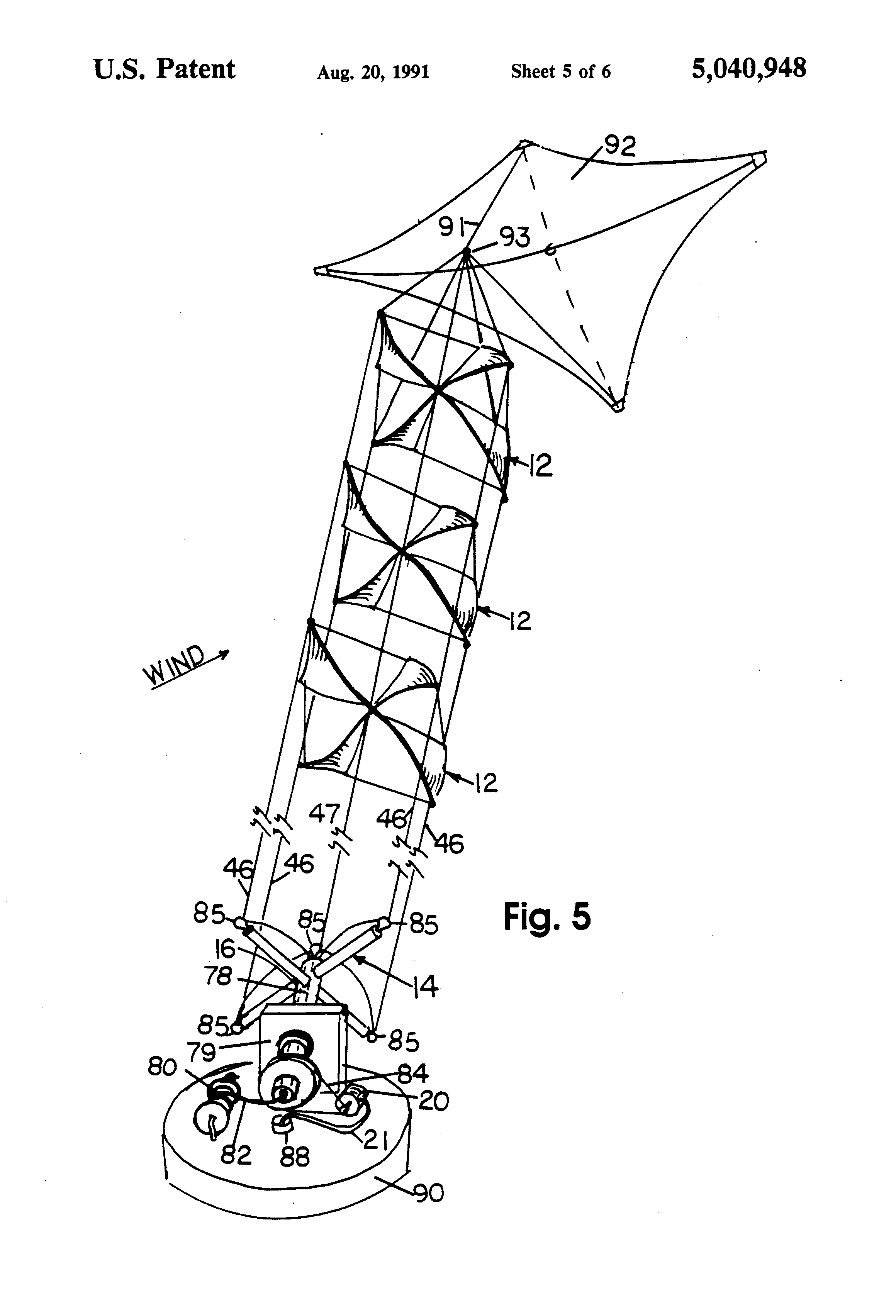 Yep, Rudy was first to design and patent… did he ever make one?

I dont care about who invented what and who patented what to be honest. Oh it could be an interesting trivia or have some monetary or organizational consequences, so its not totallt unimportant.

Just because @dougselsam came up with TRPT designs a while back does not mean that these designs should automatically be included in every paper.

As the «inventor/designer» of the Pyramid I would argue that it is a more interesting design than the Superturbines pictured in the patent. And I have provided lots of concrete work to point to a real solution. I also made a simulator. I think some of these reasons could be why The Pyramid was selected rather than a Selsam design. Or the fact that we (me, @Rodread and @someAWE_cb) went to AWEC and shared our designs with the supervisor behind this paper.

That should also be something to think about for those constantly whining that conferences are useless. This is what organic growth looks like. Conferences do work.

Also, wrt The Pyramid; I made it but my starting point was; could we do TRPT with a kite like the one we use in Kitemill, and also solve launch and land in a way similar to what Enerkite does? I would be a fool to think «The Pyramid» was my invention. I was just rehashing things that I had previously seen. It doesnt matter really who came up with which part of the design. What matters is that it could be a step closer to something actually producing power…

FIG. 85 is a side perspective view of the sixty-fourth embodiment, having buoyant horizontal axis type rotors, held by torque transmitting lashing, with no central shaft.

The catenary sag effect as the shaft length increases could be mitigated or even eliminated if each rotor had its own lift. This could perhaps be achieved with blades filled with helium or hydrogen, like on the figure 88 of US6616402 (SuperTurbine ™): [image]

This is an interesting feature to allow some scaling potential. The devices represented in the figures 85 and 88 and some other figures are concerned. Sometimes older designs include some solutions that can be benefit for the newer.

Precision: the document under discussion mentions in the limitations 7.1, page 46, the question the catenary shape with regard to the weight and length of TRPT as I have done.

The TRPT frames are assumed to rotate in parallel planes with a common axis of rotation.

In practice, the weight of its components causes the TRPT network to form a catenary

shape. This can creates cyclic slack in the rotating tethers, increase fatigue and will effect

the final elevation angle of the rotor. The effect is stronger for long TRPT networks and

can be minimised through lightweight materials and high axial tension.

In the structural analysis of the tether and frame components, centrifugal forces not in

cluded. Instead the focus is on preventing buckling of frames due to high deformations.

Further, the tether and frame mass had relatively little impact on the total system mass.

This means that in practice the designs might rather be based on available material sizes.