On three occasions I have suggested this mode of operation without any comment from the group.
With my concept of a restrained lifter kite I suggested that the lengths of the diagonal restraints be varied to move the kite across the wind window to generate crosswind action. This is not the same as performing lazy eights or circles. The kite remains vertical at all times and there is no need for a kite steering unit to control the movement. The speed of the crosswind movement can be varied based on wind conditions. If the lifter kite supports a turbine system which transfers power to the ground by means of a cable drive, then there is less chance of the cable drive twisting due to the crosswind action.
Secondly, I suggested generating crosswind action with the tower supported Daisy system. This is achieved by rocking the tower from side to side. This crosswind system is not as effective as others, since there is no way to orient the rotors to face the effective wind direction.
Thirdly, I suggest an alternate to the Minesto tidal energy system. Drag lines attached to winches on the banks of a river can greatly increase the effective tidal velocity. By using two drag lines on each side we can orient the turbines to face the effective flow direction. 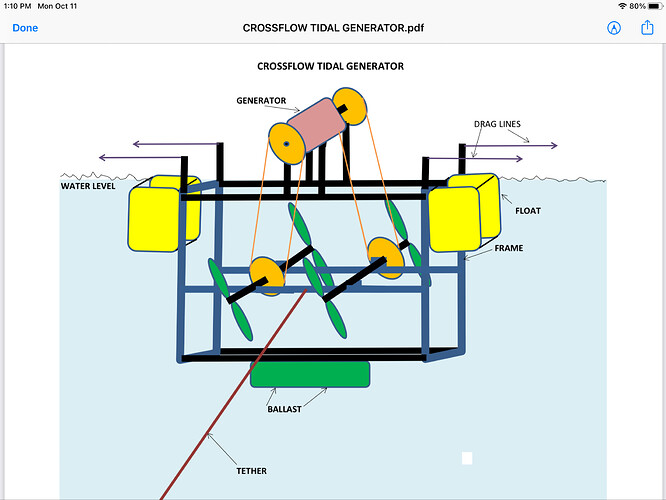 image2160×1620 259 KB
In all three systems I would assume that the amount of energy required for mechanical crosswind action is much less than the increase in power obtained. My reason for this is we are dragging the kite or turbine across the wind window and not working against the wind. It is interesting that Payne’s patent (Fig. 5) proposes just the opposite where the PTO is on the crosswind cable.
Windy_Skies October 14, 2021, 7:58am #2

Link to those earlier threads? And how are your ideas better and how are they worse than the original concepts?

For the first idea for example, you still need a kite steering unit, but now it is on the ground and you have more airborne tethers? And you’re limiting the speed of the kite with it flying sideways (vertical) all the time?

Here are the topics:

Here is the text:
Improved Minesto

I have thought of a much more convenient way of extracting tidal energy by moving turbines in a crosscurrent pattern. This method is applicable to tidal rivers or estuaries where access can be obtained on both shores.

The turbines are located below a floating platform in the center of the river. Two tethers are attached upstream and downstream on the river bed so that when the tide reverses, the appropriate tether will be used. The platform is dragged from side to side by winches on both shores. It is also tilted so that the turbines extract the maximum power from the tidal velocity and the dragging velocity.

Turbines are mounted in pairs in order to minimize cantilever effects. There is adequate space between the leading and trailing turbine to minimize wake effects. Turbine trains are in matched counter rotating pairs to neutralize torque effects. Al turbines can be designed to rotate in both directions or alternately the platform can be rotated 180 deg. for tidal changes

All turbine shafts have pulleys and belts which connect to a single electric generator, and power is transferred to shore by means of a coiled electrical cable which is supported by one of the drag lines. There are no electrical components in the tethers or under water.

Attached is a sketch of my proposed system which did not download.

The principle of using an external force to generate crosswind or crosscurrent movement is the same as my concept of moving a restrained kite by adjusting the lengths of diagonal auxiliary tethers. Does anyone in the forum have any opinion of this concept?

[quote=“Windy_Skies, post:2, topic:1764”]
For the first idea for example, you still need a kite steering unit, but now it is on the ground and you have more airborne tethers?
[/quote]y
A kite steering unit is not the same as a ground reel. It’s like comparing flying an airplane to driving a train. Programming a reel to wind and unwind is no big deal. The main purpose of the diagonal restraints is for autonomous launch and land. Mechanical crosswind action is just an additional benefit. If we can operate the reel so that the crosswind velocity equals the wind speed we would increase the power output by a factor of 2.83 provided the turbines are oriented to face the effective wind direction.

And you’re limiting the speed of the kite with it flying sideways (vertical) all the time?

I have commented these designs earlier. I dont think friction belts is a viable solution if you want to compete with solar and HAWT at utility scale. Its just too heavy and requires a lot of maintenance.

For me this is not a big deal. Less is more of course

I dont see how this design differs from other designs to a large extent. Most would choose cables on seafloor rather than floating I presume.

Ok, but using belt drive. Which I dont think is viable

Well currents are different. How thick is the current layer/gradient usually? I dont know. If the layer is not very thick, say 1 meter, this does not present much value at scale

Ok. But not really something that may trigger an investor I think.

Hmm. I think both pulleys and gears should be avoided, in particular for 24/7 large scale gear. Look at HAWT, they only have a few such parts, or maybe even none.

I think the minesto probably has more power output for the same size because their main body has a wing profile, making it travel much better crossflow.

Very negative yes, but only because you start by accusing the rest of us that we did not comment your design. This is not true. I believe I have made these points numerous times. As we are apparently in disagreement in these things, it does not seem
very useful for me to repeat these objections every time you post a new design.

I think if you made a sketch that I really liked, you would probably get positive feedback from me. I expect others may feel the same.

I dont think its a problem that we disagree on some things, and I urge you to keep posting. I am just trying to explain why maybe you are not getting «enough» feedback.

I dont think its a problem that we disagree on some things, and I urge you to keep posting. I am just trying to explain why maybe you are not getting «enough» feedback.

I have not received any feedback on “Mechanical Crosswind Action”. In general, crosswind operation acts as a force multiplier where the increased apparent wind velocity results in greater tether force (Yo-yo) or turbine performance. For this reason I believe that extracting power from crosswind movement (Payne Fig. 5), is highly inefficient.
Let’s discuss cable drives and pulleys in their appropriate topics.

The platform is dragged from side to side by winches on both shores.

OK I like to leave a little space for others, but will give a little reply, as requested.
Being “dragged from side-to-side” will take energy. Where does this energy come from? In the case of Minesto, the energy is harnessed by the cross-current kite. The crosscurrent kite does WORK to produce POWER (energy per unit time) forcing the propeller(s) through the water. The propeller(s) thereby encounter resistance to this travel, with that resistance force, multiplied by distance traveled, equal to work done (power generated x time).
This reminds me of one of my favorite descriptions of so many wannabe energy solutions that I compare to “flying by pulling up on your shoelaces”. Can you fly by pulling up on your shoelaces? No, because the harder you pull up, the harder your arms are pulling your body down, so, no net force is generated. I fear that the amount of extra power gained at the propellers might be equal to the power used to (keyword) “drag” the turbines across the current, yielding no net energy gain. I’m not throwing the idea totally out the window, but I do see this energy used to “drag” the turbines through the water as a definite factor that will definitely USE energy, and I think the only question is whether that USE of energy results in a total gain of energy by the system, or an equal wash, or possibly an actual reduction in total output. Certainly that would be the first question to answer. Is it a viable idea, or is it one more perpetual-motion machine masquerading as an energy breakthrough?