Pulling Power from the Sky: The Story of Makani [Feature Film] Finally got around to watching it over the course of multiple days.
You’ve probably all seen it, so I don’t have much to say. It’s so sad to see the company die after solving so many problems. If they couldn’t do it, it’s really hard to believe, anyone else can right now. Some day… it will work.

Who has watched it?

This video has been posted on

The effect this sudden release of Makani data and media is interesting. OK the film is inspiring but myopic. This is the documentary of 1 engineering company not of the field of AWE Science and engineering (unlike the AWE documentary by Chase Honaker) The list of employed jobs at the end tells a large part of the story too. The work was massively impressive but deserves generalisation across AWES. With the claimed intent of work … The results should probably have been shared more frequently …

There are a lot of technical videos from Makani, and also Echeverri’s publication on
https://blog.x.company/sharing-makani-with-the-world-the-energy-kite-collection-ea49398df78c .

Wind Energy is one field where if you don’t know what you’re doing, you don’t know what you’re doing. It’s not like writing an app. The field is littered with the debris of wannabe “improvements” to wind energy by outsiders who “think” something “should” work. Their particular implementation had more than one “showstopper” aspect, which could have been identified on paper if the supposed engineering expertise were for real. Nonetheless, you have to give them credit for giving it a try. The problem is, if you go down the wrong path, it doesn’t matter how far, or how fast, you go - the wrong path remains the wrong path.

@Tom
Look Where have you been?
Everyone’s watched it (ok all the nerds)
And everyone is a critic or merchandising 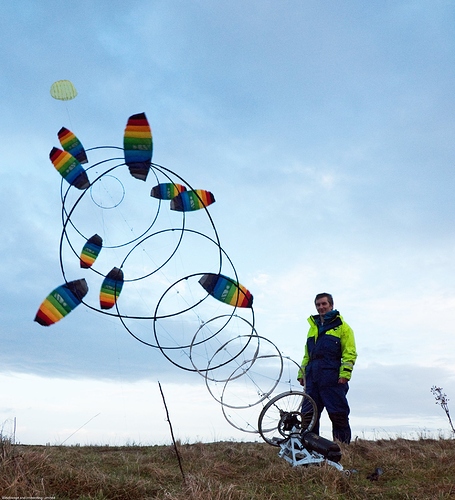 Loving the strong look @nibot My on-set wardrobe stylist normally only lets me out in @FladenFishing survival suits https://t.co/v7zXYNGk6J
1 Like
PierreB October 3, 2020, 7:24am #5

Hi Doug, sure but some other AWE wrong paths could be discovered then developed, although their funding may be increasingly uncertain, with Makani’s failure setting a precedent. It is not the first failure, remember Magenn and some others.

The great new would be a successful AWE path.

It’s so sad to see the company die after solving so many problems.

I can understand it. I felt the same sadness when Dave Santos and his team stopped the testing campaign of Mothra. A main thing is that Windswept and Interesting pursues.

You’re right @Tom
The scale of Mothra wings were way bigger than the Makani one.

That was enabled by Daves application of loadpath sharing the forces of multiple sails along one line .

That’s obvisously not what I meant. I was referring to the investment of effort, time, money, which was way larger for makani than any other AWES venture.

It’s so sad to see the company die after solving so many problems.

after causing so many problems…

The wind didn’t give 2 shits how much effort was put in.
It won’t support the intent of the Makani architecture in that implementation.

For the sake of fact checking instead of trusting my earlier…way bigger claim… What were the 2 spans and wing areas Mothra vs M600?