The new thing is instead of an endless loop, you have two reels on the ground. You will need to alternate now and then, but the benefit is that the length of the reeled out tether can be adjusted on the fly, for easier launch and landing.

With some gearing, the generator can surely be shared between the two drums. 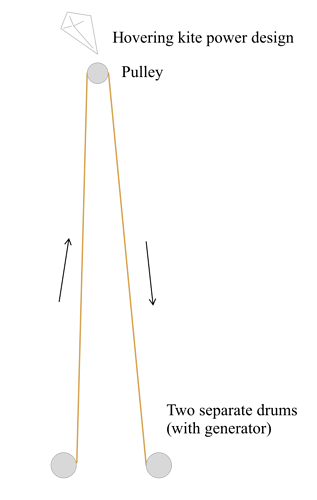 Edit: I realize this was not very clear. The aim is to collect energy in the airborne pulley eg by a gearbox connecting the rotating blade assembly to the pulley wheel. Then reel the tether back and forth, collecting the energy at the ground. Compared to a reel with a looping tether, the operation is the same, except the loop runs forever while the dual winc must alternate the direction. Also, new and improved drawing 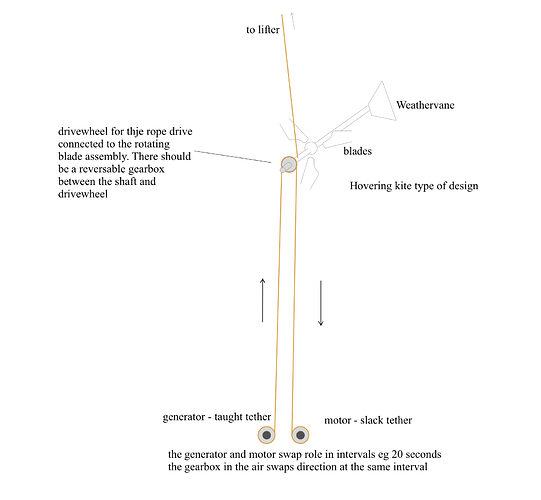 This is crosswind motion, not “hovering”, but the rig is similar to above; USP3987987

(4) (PDF) Assessment of an Alternative Concept for a High-Altitude Wind-Power Generator (researchgate.net)

it is interesting indeed because it allow to change altitude easily. but how does it works in generating phases? has drawed, it looks like a yo yo kite system, far different from having a wind turbine up there

It is like this (sketch below), but with a pulley which makes it workable. See also your reply.

I agree with Dave about the similarity (as for the device on my sketch) with Payne’s patent fig.5.

but how does it works in generating phases?

The thought was it would run for x seconds then reverse. Of course the airborne side of things would also have to be reversible… i think maybe a ratchet kind of mechanism could do that

The airborne assembly should stay hovering at a fixed place.

7 posts were merged into an existing topic: Slow Chat

This design is the same as Payne’s patent fig. 5 apart the pulley at the kite level, the two drums with generators replacing the generator + anchor and the pulley + anchor, and the confusing “hovering” term replacing the appropriate and well established “crosswind” term.

This design is the same as Payne’s patent fig. 5 apart the pulley at the kite level, the two drums with generators replacing the generator + anchor and the pulley + anchor, and the confusing term “hovering” replacing the appropriate and well established term “crosswind”.

Then I think you misunderstood.

My figure describes a system where one drum reels out and one in at the exact same speed. But the reel out speed is not related to the blade flying speed, as this is a reeling system. At the airborne side, you are not seeing merely a pulley, but also a wheel where power is transferred from kite to ground. Power transfer from blades to that wheel probably using a gearbox.

That construction enables easy deployment as total tether length can be easily changed. But that is not useful once the system is running.

Edit:
I do admit that on closer thought, Paynes no 5; is it reeling or pulling energy transmission? is an interesting and not straightforward discussion. I still stand at pulling like initially. Related question, is it hovering or bounding? depends on flight path. I think it can do both

Sounded like you had leading edge blades driving a 3 way capstan loop developing there Tallak
Like a mechanical Makani driving lines.
Sounds very tricky but cool. Please build one

Yes. I was thinking about rope drives and the problem of deployment. And a modified Kitewinder to be specific.

My rope drive 2.0 could be implemented in software and electrically by:

And on the ground

To be clear[er] I am replacing the gearbox and mechanical linkage between rotary and rope drive with electrical coupling.

The reason is that now it will allow change of direction and intermittency without too much power loss.

The “reversing laddermill” comment was a mere flash conjecture on my part, as I looked at a drawing showing only a tether rope, but no blades or working surfaces. I was adding an assumed detail of blades somehow driving the rope, but on second glance I have to say I do not see any fully workable drawing or description here, since it contains no details of how any working surfaces would power it. What am I missing?

I hope the new and improved figure clears things up also