I evoked the concept of reversible kite here and there. The assumption that a large kite which optimizes its swept area cannot turn a lot due to its dimensions in regard to the tether length, leads to another assumption that a symmetric kite could go forth and back, losing some efficiency but perhaps not too much.

Let us imagine a flexible single skin (possibly networked) kite of which the span = tether length.

In yo-yo mode, the reel-in phase would be at the two ends of the transversal trajectory, where the traction is low because the kite is at an edge of the flight window. On the sketch below there are four lines: the two black leading edge lines become the two blue trailing edge lines, and vice versa. The angle of attack is modified at each crossing. This wiper mode operation maximizing the space use could also be applicable for towing ships. 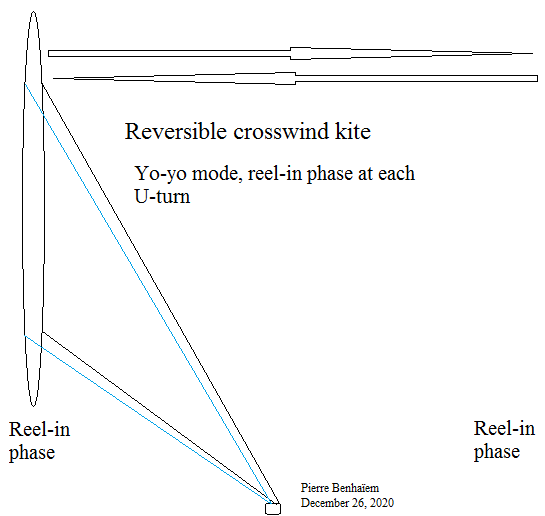 It’s an interesting concept to come at the AWES design with intent to reduce the line to span ratio.

However I’m struggling to see how this can maintain a strong energy output.
Force and velocity of the 2 tether sides will be fluctuating violently.
Especially as this is intended as yo-yo too.

Is it your intention that the reel in phase is how the kite form maintains its width and control without solid structure at these extreme swayed ends from 1 anchor?

There’s a good argument for easy control of reversing motion or swaying from wide separated anchors.

Matching the generation equipment to the kite flight output is a key to efficiency. 1 generator is efficient but 1 control point is less secure and stable for kite flight.
Thanks for showing another look at the challenge of balancing AWES plant parts.

Thanks for your observations @Rodread. I am not sure to well understand what you mean. So I will describe some features as a possible reply.

This symmetric reversible kite works like any flexible 4 line power kite, but without turning. The single anchor figures the single user. Thus a single ground station can control a 4 line kite. Here each line is connected to a respective winch which drives its own generator. The difference is that the respective generators work in one direction then the opposite direction (during reel-out phases) because the kite does not turn. The 2 x 2 winches also control the kite steering by adjusting the tether lengths during each crossing. The reel-in phases are realized when the kite slows down then stop at each edge on the flight window, before going in the opposite direction. Some maneuver could be required in order to avoid a complete loss of lift when the kite stops (thus it does not stop completely), the reel-in phases being also a part of said maneuvers, benefiting of both slow move and less powerful edges of the flight window.

Let us note that several separated anchors impose a circular rail to face any wind direction, having to move to face the wind. A single station allows to safe a lot material and ground installations.

And the single station I prefer allows to control the 4 lines as indicated above, adding some passive safety, the kite losing power when only the 2 front or rear lines are kept, avoiding chain breaks of tethers as soon as a tether is broken. That said a reversible kite could be adapted for a several anchor rig. I think the first point is studying the kite before studying the specific ground installation.

On the old video below there is several columns of superimposed “small” kites going forth and back but turning at each U-turn. However the control of superimposed “small” kites is too difficult and mess can be unavoidable. But using only one giant kite in the place of superimposed kites is not possible because there is no place enough for the U-turn which in addition would last a long time. The lever system is replaced by a yo-yo ground station. On the video there are five stations, but a single station would be better, and also possible since the single giant kite has not only a higher span but also a higher cord, being wider to maintain proportions. This is where the Power Harvesting Factor ζ comes: see pages 15 and 16 on:

So a flexible (possibly networked) huge kite of ζ = 2.37 and solidity = 1/4 would be a reasonable start. The flight window could be maximized for different sorts of single kites.

Force and velocity of the 2 tether sides will be fluctuating violently.
Especially as this is intended as yo-yo too.

In the end of each crossing (each reel-out phases) there is a reel-in phase which mitigates the fluctuations due to each U-turn. So the yo-yo mode seems to be suitable for the reversible kite, and all the more so as the reel-in phase occurs at the edge of the flight window, when the kite is slowing down.

A main aspect is that the reversible kite could be quite huge. This aspect emerges from my descriptions (kite span = tether length). As @kitefreak is an (if not the) expert in giant networked kite, as shown with Mothra, I would be glad he plans a realization of a power reversible kite, using elements allowing far higher dimensions than a not networked kite would have. Of course I expect he would use the format he wants to communicate elements of building.

Reversible kites are very interesting.
The main advantages I see from them is simplistic operation allowing array deployment.

The kite attitude depicted in this diagram seems extreme. Where the kite is able to punch into the wind sideways so far.

From what I’ve experienced of motion reversing in soft kites or over kite networks , these tend to be soft across their span, e.g. kites which rely on pressure for form.
A strong reversal from a single point with short lines is hard to control and won’t provide a lot of power. The soft span is prone to collapse in this configuration.

that several separated anchors impose a circular rail to face any wind direction, having to move to face the wind. A single station allows to safe a lot material and ground installations.

Assessment of an Alternative Concept for a High-Altitude Wind-Power Generator
Max Langbein1, Maja Ruby1 and Nicolas Gauger1
Describes how a spread 3 tether motion suited to a reversing kite motion can be used in yoyo style generation whilst also providing for a way to keep the kite pumped flying in calm.

The flat sheets of these sails tied as a kite would thrash and gallop wildly in a strong wind even despite spread loadpath rigging along the span. More crosslines between panels helps but it’s a lot to control 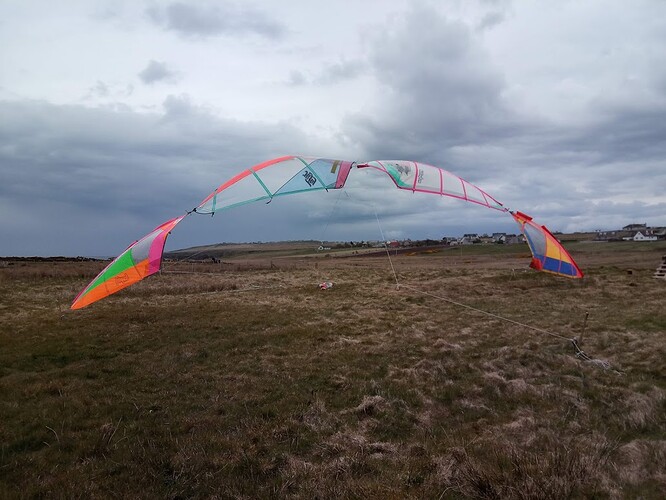 A strong reversal from a single point with short lines is hard to control and won’t provide a lot of power. The soft span is prone to collapse in this configuration.

Thank again for your observations. This reversible kite is a 4 line power kite. In yo-yo mode there is a (more or less) horizontal crossing towards a side during reel-out (by the 4 winches-lines) power phase, then the kite slows down at the edge of the flight window while reel-in (always by the 4 winches-lines) phase occurs. Then the same towards the other side.

The control is achieved by the 4 points (not only “a single point”) of the 4 respective lines. The change occurs after each reel-in phase: as a result the AoA is modified by lengthening or shortening the front or/and rear lines alternately.

Thad said I don’t know the real behavior of a reversible kite until I can pilot said kite. Unfortunately I am not an expert in kite building. It would be great some expert try to build an even small 4 line reversible kite for tests. Perhaps modifying a Nasa Wing would be a start.

Concerning the tri-tether plant (imagined by Dave Santos and calculated by Max Langbein, Maja Ruby, and Nicolas Gauger), indeed it does not use a circular anchor. But three anchors lead to a big installation, and perhaps a loss of power. Tests are needed. But before choice of ground station type, testing some reversible kites would be easier and make a first step.

The video below shows that reversible flight, the trailing edge becoming the leading edge, is not easy with existing material. I think with my 4 line power kite it would not be better. So a specific reversible kite would be required to know how that could work or not. Happy New Year to all!

As a reversible kite likely leads to a loss of power, perhaps using a classical power kite could allow using not more space by making U-turn with zero radius, like on 0:31 of the video below: If U-turn with zero radius can be executed with huge power kites, this can allow them to scale up more. In yo-yo configuration the reel-in phases occur during U-turn when the power is low because of slow motion in the edges of the flight window.

Crosswind paths allowing to use a larger powerkite for a same tether length
PierreB January 25, 2021, 12:26pm #9

An example of potentially reversible kite is by using Flettner rotors. Indeed they can rotate in two directions when the kite flies crosswind left to right then right to left. The lift-to-drag ratio is about 2 or 3: it is not much, but the high coefficient of lift compensates it. An example is given below: 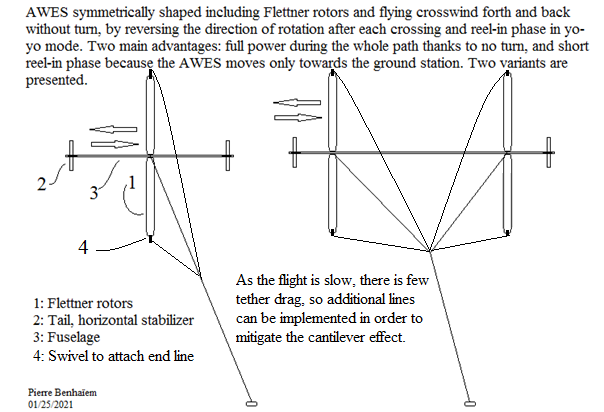 So in yo-yo mode with 10 m/s wind speed, the 2.5 L/D ratio kite will fly at 16.6 m/s, leading to a high power consumption for a very high power. One can note than with a lower wind speed and the same rpm the spin ratio increases as for the efficiency. So in some way the use of Magnus crosswind kites allows to keep a more or less same efficiency even with different wind intensities.

It’s figures 11 & 12 which worry me
Power coefficient >1 ? What’s that mean?
They make more energy than is supplied via the air stream?
Wow impressive … Was it lightning attracting?

I think here the power coefficient is related to the cylinder area, not the area swept by the cylinder which is indicated on another publication in fig. 1.24 and its explain pages 24 and 25,
https://hal.archives-ouvertes.fr/hal-01759173/document :

In Fig. 1.24, one can see the vertical trajectory of the MW scale system. We also
present a comparison with an equivalent conventional wind turbine. Even though
the Magnus effect-based system is less efficient to capture mechanical energy from
wind, it produces the same amount of power as an 80 m diameter wind turbine
(around 1.4 MW for 10 m/s wind speed) since it works on a larger area. In other
words, an 80 m diameter wind turbine works on 5000 m2 with a power coefficient
cp = 0.45 where the Magnus effect-based system works on 13940 m2 with a power
coefficient cp = 0.157. With the same method used in Sect. 1.5, the Magnus motor
consumption can be estimated by PM = 22.7 kW for CM = 0.0055, X = 4.3 and
vw = 10 m/s. Knowing that production phase is 59% of the time, the net output
power of the Magnus motor over the whole cycle is 13.56 kW which is about 1% of
the power produced.

The power coefficient cp becomes only 0.157 because the swept area is considered, and not the cylinder area.

Beside it here the estimation of the motor consumption is not corroborated by the experiments which give a much higher consumption indicated in the Fig. 13.