SuperTurbine™ is optimally oriented at a skew angle to the wind direction, with rotor skew thereby shunting each wake away from the succeeding rotor. Nice when the experts catch up with simple ideas.

I remember hearing when I was a kid “Only the sun has planets.”

I pondered how long it might take for “the smartest people in the world” to see what looked obvious to a little kid: If the sun has planets, other stars probably do too.

Imagine germs on a grain of sand, wondering whether the other sand grains on the beach have bacteria too…

All roads lead to SuperTurbine™…

Ideas of “worlds without number” were common long before Doug’s lifetime, as well as the practice of skewing rotors, and avoiding multi-rotor wake interference.

The problem with “all roads lead to the SuperTurbine” is its drive-shaft transmission’s practical mass scaling limits. No Stanford study has validated the ST as such.

Your turbines are very close together, much closer than the wind turbines in a windpark, so the wake from the previous turbine should have a much bigger effect than this relatively minor effect, I would think.

You can do CFD analyses or let smoke flow through the turbines to see how much the wake of the previous turbines affects the next ones. One can do the same tests with other stuff close together, like kite networks.

Imagine if Horton Hears a Who turned out to be nonfiction.

I think the issue for the ST would be that the blades would be skewed along the shaft, and so the wake would also be directed along the shaft rather than directly downwind. So I don’t quite see where this paper leafs to the ST…

For what I understand in SuperTurbine ™ each downwind rotor takes fresh wind, while
in this wind farm the downwind turbines take the wake from the upwind turbines. 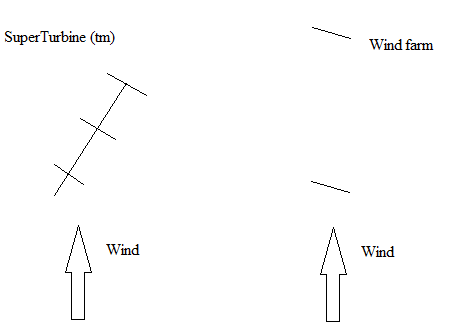 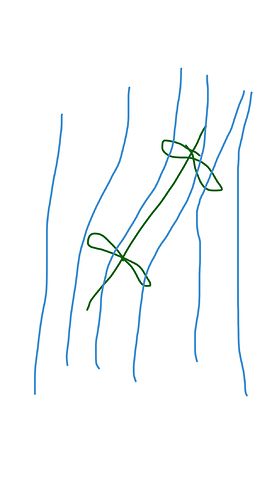 The paper mentioned that rotating the windmills in a windfarm could increase the efficiency as the wake was directed away from downwind windmills.

With the ST, the blades would be pointing the wake along the shaft. So therefore you would be worse off than not considering this effect.

In practice, you would need extra spacing between ST blades to accomodate this effect. OR??

I would deduce, likely wrongly, that the downwind turbine in the wind farm would take fresh wind as the wake upwind is diverted.
Concerning ST unfortunately the Schwarzenegger report on SuperTurbine (tm) and Serpentine, and other torque transfer systems seems to not be available. The report mentions:
“The turbine was built with seven rotors, each seven feet in diameter, and mounted on a single, 70 foot long tubular carbon fiber driveshaft.”, then
" Output was 5 to 6 times the power of a single-rotor turbine of the same diameter at all tested wind speeds.", then
“The tilting mounting mechanism (U.S. Patent 6692230) functioned as designed, allowing the shaft to rotate toward the horizontal from the default 25 degree upward tilt as wind speeds increased, thereby mitigating the amount of fresh wind striking all but the front rotor for overspeed protection.”.

So ST efficiency is very high, above all if we take into account of the efficiency (0.75) in regard to the losses (0.25) due to cosine cubed by using an angle of 25 degrees, and other losses due to aerodynamic effects such like wakes. I have no explains for this.

The CEC is reorganizing their website right now.
Try this link:

BUILD AND TEST A 3 KILOWATT PROTOTYPE OF A COAXIAL, MULTI-ROTOR WIND TURBINE...

Hi Tallak:
In the tilt-back (upward-sloping) version of SuperTurbine™, each tilted (skewed) rotor deflects its wake at a slight downward angle. The wake is not deflected upward as in your drawing. Think of a set of downward-slanted slats or venetian blinds - a downward-directing louvre. The downward deflection redirects the wake away from the next rotor in line, which is located higher. It also helps elevate each rotor by providing an upward force on each rotor.

Hi Doug,
Is it the same for Serpentine or do you describe Serpentine?
Now would that mean for an horizontal SuperTurbine ™ pointing to the right the wake deflection of each rotor will go to the left?

Look at any wake deflection from a rotor … it is steered toward the more downwind side of the rotor after passing. There were some really good presentations on wake steering for overall farm benefit at WESC2019 in Cork

Yes, it applies to any offset direction.

Yes exactly, just as if you placed a tilted disc of plywood out there, or any slanted surface, which way would it deflect the wind? Some of this stuff is not so complicated.

Its not straightforward to visualize what happens with a spinning rotor tilted to the wind.

Intuitively for me, directing the wake downwards would mean that lift had been generated, similar to lift on a wing

A lot of the problem of visualising is … There’s not often much particulate to look at in air.
Listening or feeling compressed air is more common.
We suss this out as kids then forget it on the internet.

A singer compresses (vibrates) air very efficiently. The reverberating elastic shock of that vibrating energy travels a lot faster than the wind. This speed is important as the signal propagates upwind very easily.

Even a weak human vocal tract can effect air on the other side of a valley. Similar things happen in the reeds of musical instrument. If we make a really big reed and call it a wind turbine we can send a lot of fast signal into oncoming air.

To be really simplistic, Sound energy dissipates into the general mass of oncoming air, So lets consider it as one lump now… Look at the incoming air hitting the blade plate like a snooker ball hitting a wall at an angle. Yep there’s a reaction to the side.

To generalise horribly - I’d say the upwind effects of a turbine are often unknown… I still know nothing about it.

Its true, speculation about airflows is pretty failure prone to say the least…

You got it backwards.

That’s right.
BTW this format is lacking - answers or comments on posts are not correlated with the post they refer to, so they lose all meaning.