A group of strutless kites specially for foilboardibg are coming. This seems to be close to an optimal power to weight ratio for LEI kites. I wonder if the design is scalable?

I would like to know how @Kitepower and @rschmehl assess these strutless LEI kites for their AWE project.

And also the use of foils could be interesting for some AWE designs. Some messages are concerned: Pump Foiling emerges as Pumping Kite compliment, Rotating Reel System… 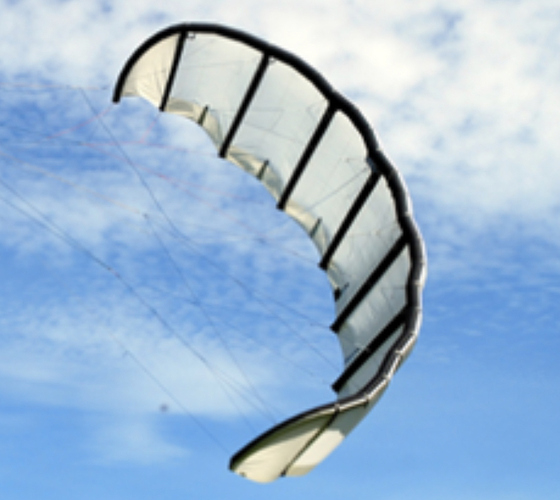 I see that the larger Kitepower LEI kites dont seem to have a smooth surface like person-sized kites do, hinting at some difficult scaling effects, though their latest design (?) seems more traditional with a smooth surface. 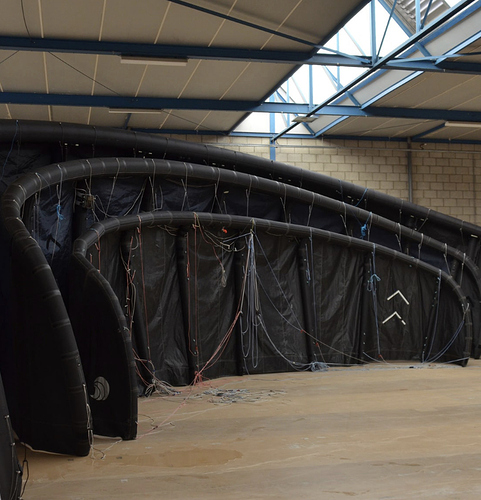 All about kiteboarding. World’s largest kite forum for every level. Search all info and get help from thousands of users worldwide. Every questions gets answered. Several different forums for different styles, sports etc

We could assume a strutless Aluula kite could weigh even less than 0.1 kg/m2 (using kind of optimistic assumptions)

Just to clarify, there are other important effects that must be taken into account for AWE:

To calculate the additional weight of the air in the inflated leading edge, consider the pressure 0.5 bar, length 6 m for a 10 m2 kite, diameter 10 cm avg. Thus amounts to «1 kg» of extra weight, or +0.10 kg/m2 in the above numbers

When and why is weight important? And how important is it? Couldn’t we ignore gravity in some AWES?

I wonder if the design is scalable?

Maybe the rigidity of the beams is important? To keep the fabric smooth the beams need to be rigid? And the fabric itself would need to be strengthened to handle the larger total load.

When and why is weight important? And how important is it? Couldn’t we ignore gravity in some AWES?

Airborne Wind Energy Systems: A review of the technologies mentions:

7.1. Effect of flying mass
In all AWESs, increasing the flying mass decreases the tension of the cables. Since Ground-Gen systems rely on cables tension to generate electricity, a higher mass of the aircraft and/or cables decreases the energy production [107] and should not be neglected when modelling [109]. On the contrary, increasing the flying mass in Fly-Gen systems does not affect the energy production even though it still reduces the tension of the cable.Indeed, as a first approximation, the basic equations of Fly-Gen power production do not change if the aircraft/cable mass is included and this is also supported by experimental data [108].

Concerning Tensairity structure the requirement of a permanent control of the pressure is a serious issue. And also the weight of the compression element (generally a rod) and the cable is both not very high but not negligible. I think some lattice structure could replace it in some cases.

7.1. Effect of flying mass
In all AWESs, increasing the flying mass decreases the tension of the cables.

Four Kites - One Kiteboarder! How to Stack Inflatable Kites | Seabreeze

You may have seen two kites stacked together by a couple of groms at a kiteboarding comp, but have you ever seen four? 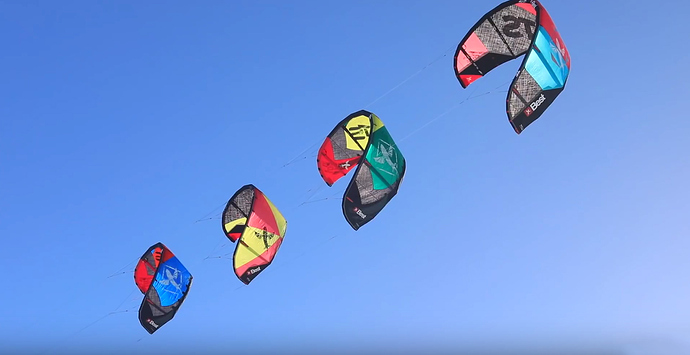 Would be interested to see how the strutless design copes with stacking.

Section 6 of the paper can be thought of as Rolf Luchsinger’s 2004 answer to, will air beams scale, which is similar to the question Tallak is asking here. His answer is not really, and here is the physics to back that up.

Control of the pressure is an issue with any inflatable structure. That should be less of an issue with a tensiarity beam than an air beam because of the lower volumes and pressures, for equal strength. You could try to do calculations about when it is better to use one or the other, air beam vs tensairity beam (vs rigid wing). Since there are people doing each of the above, each must have their advantages and disadvantages.

I’m wondering, what would a LEI kite look like that had a Reynolds number of 7 million?

I see now that the airush kite is no longer on the market, possibly replaced by a single strut kite. In this interview, North’s designer Pat Goodman (previously Cabrinha) states that five struts are necessary to deal with gusty winds. https://m.youtube.com/watch?v=18ISe4gZ1h0

To be honest, making a power plant that does not tackle varying and bad wind is a showstopper. So though not necessary for a proof of concept, it is a worthwhile discussion.

A kite for AWE must be able to be used in a wide range of winds. The wind close to ground is probably very weak. When landing, a low mass will make sure the stall speed is as low as possible, so that you dont need to land really hard and heavy. When looping without multi kite speed support, the mass will have a massively detrimental effect on power generation. When crashing, low mass reduces the impact energy.

I am not sure if large LEIs are suitable for large scale utility power generation. They may be suited for smaller scale stuff, eg Kitewinder scale and a bit bigger. To be honest I think at this scale LEI kites are more suitable than most foil kites due to easier handling alone, but I also believe the performance is quite good, especially if the mass is reduced further.

I think the main issues with LEI is the Anhedral wing, the bridle being very low relative to CG and the issues placing control units directly on the wing (rather having a pod with weak mechanical coupling to the kite).

Control of the pressure is an issue with any inflatable structure. That should be less of an issue with a tensiarity beam than an air beam because of the lower volumes and pressures, for equal strength.

The consequences are not the same. A deflated Tensairity beam can cause the wing to warp and then break the rod, then drop heavy and rigid elements that can be dragged long distances.

I do not authorize your use of my post below, removed in protest of wrongful Moderation policies that Tallak as a Moderator supports.

Preprint text- "Kitepower uses flexible leading edge inflatable kites, but these have a scaling disadvantage in that they become heavier with size. A single skin kite has the potential of negating this disadvantage while at the same time being more aerodynamically efficient. "

It would have been great if some of these results had been shared (about LEI scaling). You could not expect someone to readily accept a scaling limit of 30 sqm by your statement. That would mean Kitepower’s 100 sqm kite is worthless? I would rather believe that the 100 sqm kite does work, as they have much more to show for in terms of argumentation