Hi. I wanted to present an idea for a calculation of TRPT (torsional ring power transfer?), or I guess any torsional transfer rig, where the shaft must be maintained at a certain diameter. The starting point is that the kite flies at a speed relative to the wind speed, glide number G_e and the amount of force in drag direction (drag mode) applied by the torsional shaft, it’s orientation relative to the wind, sustaining it’s own mass and such.

It all is quite similar to any drag-mode kite, such as Makani’s setup. The value of \gamma_0 would represent the optimum drag to maximize power, and thus may be assumed constant.

You could choose any number of kites and layering of kites. For most simplicity I will only assume one kite and one tether. We will assume that the rig could still fly in circles with a hollow shaft. The hollow shaft is assumed to consist of a number of tethers going from ground station to kite, with a compressive spacer structure keeping them apart. I guess this would probably be a part built with carbon tubes in practice.

What I want to investigate here is what happens when the diameter (or radius R) changes along the length of the shaft.

We know that no energy is lost, produced or stored in the shaft. This would be physically impossible. This means that we may assume that the power transfer is constant throughout the shaft, at any given distance from the kite’s looping path/plane. 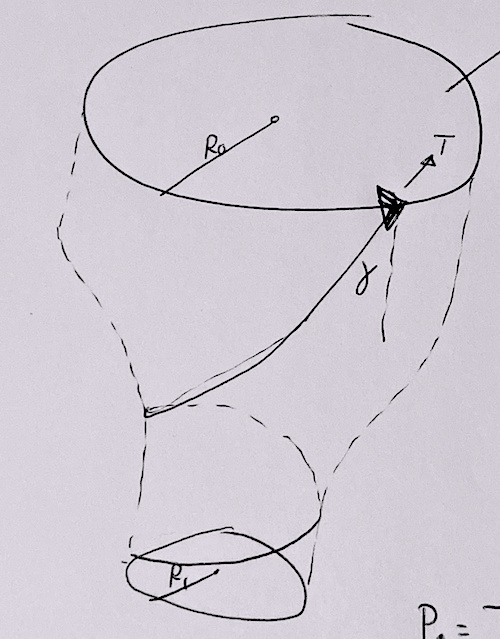 Physically, the tether will spiral tighter for a lower radius. The tension T of the tether and rotational speed \omega must remain constant.

From a similar discussion at Medium scales for torque transfer systems onshore and offshore we (I) arrived at:

This equation represents the force per length of tether that must be applied outwards to maintain the hollow torsional shaft shape.

To see how the weight of the supporting structures would scale with a reduction in R, we look at the buckling load of the carbon rods, which not must be reduced in length such that L_0 = x L_1 and F_1 = x^3 F_0. The same type of calculations were done in the other thread, so I’ll just “gloss” over most of the calculation, ending up with:

So if you reduce the diameter of the shaft by a factor of x, you would have to increase the strength of each ring such that the weight increases by a factor x.

The tether drag of the shaft is determined by aerodynamic drag proportional to tether speed (approximately) D_{tether} \propto R^2 \omega^2. Furthermore, tether drag increases with the number of tethers in the shaft n by a factor of \sqrt{n} (I will assume this is prior knowledge as it is material for a quite long description by itself).

At this point, it should be possible to optimize the tether drag against the mass of the hollow shaft to obtain a most optimal solution/construction of the rig.

This is what I would expect: The mass of the shaft is quite significant but so is the tether drag if you want to go high (compared to a traditional single kite rig). By reducing the shaft diameter you are incurring a cost in mass by the scale x while the reduction in tether drag is scaled by \frac{1}{x^2}. Presumably the optimum shaft diameter is somewhat smaller than the initial looping diameter of the kite (eg. 6 times wingspan), and thus the \sqrt{n} increase of tether drag will be compensated for quite easily. It is difficult to say which of the two kinds of rig could go higher…

It seems the fewer number of tethers n would not increase tether drag much, and also provide an easier mechanical build, as rods will be mostly pointing inwards in a triangle compared to “rings” with more than three edges. The next logical step for many n would be to have the rings built as stars rather than triangles. These detail design questions will greatly effect the mass of the rings.

I guess even a helix (n = 2) is possible and perhaps even a good solution.

Interesting further work would be to analyse the optimum number of nodes in the rings, given that mode nodes (higher n) will reduce the length in the buckling formula, while still making the geometry of the ring less optimal (the compressive load should presumably be towards the centerline).

The rotating reel system is a TRPT device without rigid parts, so a fully TRPT.
https://www.researchgate.net/publication/324135034_Airborne_Wind_Energy_Conversion_Using_a_Rotating_Reel_System
There is an analysis of the transferable torque on the figure 22.18. The “shaft” (in reality the peripheral ropes) varies a little in diameter, but in the other direction as the ground rotor diameter in the example is 50 m while the inner flying rotor diameter is only 40 m. I mention it in order to be quite on the topic.

@tallakt’s analysis has shown the limits as the system scales (huge?). Indeed I mentioned 1 MW, thinking this value is still too low imho in regard to the tether length for economical reasons (land use 4 km²) Medium scales for torque transfer systems onshore and offshore. From the analysis I mentioned a weight of 5623 kg for the rigid rings for a 1 MW system (by going from 1 kW and a weight of the rings of 1 kg), so 5 times M600 weight.The complete discussion from Tallak’s analysis shows also some nuances.

Sag-factor caused by wind resistance and gravity is a large source of power loss, as the entire torque structure is dynamically flexed with every rotation. There is also the compounded parasitic power loss of maintaining scaled-up mass in flight under square-cube law. Compressive structure is especially penalized.

Only surface anchor spread is a relatively scalable torque basis, as the carousel/rotating-reel or tri-tether models offer. Existing rotating shaft configurations are already near effective scaling limits, as further scaling attempts will prove. There are also critical operational safety and reliability scaling factors to compute.

This is the heuristic picture for numeric methods to reconcile.

I am sorry to have liked this message which is a high level synthesis.

If it were better understood, we could leave the systems that can not progress to focus on what has a chance to work. Even a fine incrementation on a weak concept will do not give anything useful.

There are also critical operational safety and reliability scaling factors to compute.

Indeed I mentioned an expected pendulum effect of the rigid compressive structure due to the structural shear by different winds. There are probably other safety and reliability issues.

Having another look into the dynamics of TRPT.
Roughly inline with a Spring Disk model but using 5 tethers.
Got good responses from several control inputs and braking forces too.
Will take a little while yet to build the analysis set ontop of this simulation.
If anyone wants to play with the model in grasshopper it’s
spring disk 2 feedback and varying input top and bottom.gh (36.4 KB)