https://patents.google.com/patent/WO2010106382A2/en
Gábor Dobos, as a visionary thinker in energy; conceived a wind plant comprising “…energy producing flying units, and one or more receiver ground-stations…”, and using wind shear (in high altitude or close to mountains or to some obstacles or to the sea) to take energy by using dynamic soaring like albatrosses. The problem to solve is the storage in flight.

The basic principle of dynamic soaring is explained below:

I suggest the “ground-stations” would be our homes, according to an individual use. Thus a small VTOL like a small Lilium would be completely automatised. As the flights could be short the storage in flight issue would be lesser. It would fly ten minutes then feeds the home then begins again. As there is no tether, several people could have and use it in their own space.

Another possibility is reloading planes by dynamic soaring.

2 posts were merged into an existing topic: Questions and complaints about moderation.

The same can be said about tethered AWES. There is no significant production in spite of years of R&D and investments.

Does look better in theory though.

The big difference is that a lot of people believe in such systems. If they believed in tetherless they would try that also.

Tetherless is interesting for super low power stuff. For instance 24/7 airborne surveillance. They are not very interesting to me personlly due to the limited impact such systems could have

The tether makes an underestimated problem for a massive implementation, due to the land and space use above all for large crosswind kite systems.

A use for individuals should be studied as I mentioned.

Without untethered AWE, there would be no soaring birds like condors nor albatrosses, nor such great bird migrations, nor thriving soaring sports, nor billions of pounds of aviation fuel savings (5%), all by playing tailwinds and updrafts.

There is tremendous applicable R&D progress across many aerospace sectors, from the imaging and prediction of air motions, to flight automation, to new aircraft types like solar-aircraft, that naturally leverage solar energy with wind energy, for optimal performance.

There is the long aeronautical tradition of RAT (ram-air turbine) auxiliary power devices along with better batteries and fuel-generation options, including cryogenic factors based on the thermal altitude gradient. Even just making ice might pay someday.

Gabor Dobos understood the optimal soaring scale unit to be small, but understood large swarms of small units as the logical scaling basis. There is active research in autonomous flight of swarms of sUAS. Current AWES R&D as such is terribly limited in scope.

Scaling in numbers rather than size becomes a real possibility thanks to the absence of one kilometer ropes per device of a few meters.

And also R&D in untethered AWES involves R&D for storage which is a fundamental field for energy research.

Kite Networks, of course, are also-

“…a real possibility thanks to the absence of one kilometer ropes per device of a few meters.”

Kitepower punched a big hole in metal, more or less untethered. They are so modest, calling it just a “small hole” (5cm). It would take a cannon or giant laser to accomplish the same feat.

Gabor Dobos, and his IFO work, remains the primary reference in this concept-space.

What Old Forum discussion added was details like DS looping, water-ballast carried high, either to chill the water, or store potential energy as mass x height.

Its never seemed to me that tethers were the problem in AWE, but the magic part linking wing-to-wing or wing-to-Earth. The best kites are good both on and off tether, and the ultimate AWES may support both modes.

The energy of the wind relies on a difference in wind speed. A tether is a convenient way to link a kite to the ground (zero speed) to the wind flow. Take away the tether and the kite must find a change in wind speed by itself.

I doubt this will ever become useful for utility scale electric power generation.

If you want to keep a drone airborne for as long as possible, such techniques are relevant. I would think it is useless unless you have a high efficiency glider. A normal kite would eventually just drift downwind. In this scenario I would categorize it as flight rather than anything kite related (thus escaping my personal region of interest at the moment)

Another possibility is the implementation of individual drones to use the wind gradient close to the ground like this:


by adding turbines and storage devices onboard.

Concerning tethered AWES and by using the lower part of the troposphere, the rope is not a crippling problem if the dimensions of the wing are consequent.

Untethered AWE is already our most successful industrial scale case. Aviation saves about 5% in fuel use by selecting flight paths that maximize tailwinds. That’s billions of pounds of fuel savings over the last century.

Soaring birds also have operated at industrial scale for millions of years. A bird watcher on the Mexican Gulf Coast during migration season can record many tens-of-thousands of vultures and hawks soaring past in one day.

Like Pierre’s cell-phone comparison, someday a personal IFO soaring unit technology could provide many millions with their personal energy needs. At least Tallak believes in imminent adequate software reliability for autonomous AWE flight, if not in small format untethered platforms, in vast numbers, ever. 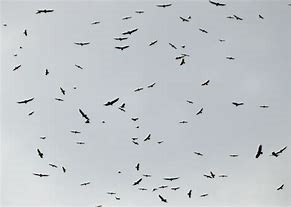 How can you extract meaningful amounts of energy? The transport from high to low altitude itself constitutes kite drag which is just gained in the loop. How big DS would be necessary to extract eg 100 kW on average? And no means to offload the energy to the ground also…

The best analogue is biomimetic. How does an Albatross “extract meaningful amounts of energy?” By DS physics.

If every human could own an albatross-equivalent IFO, that would in-principle be a viable basis for a superior civilization.

I think the biggest problem is the chemical or battery storage on board. It is the reason why I envisage an individual use to begin.

Raising and lowering Lion batteries is already useful. kPower’s KiteSat charges phones up in the air. A side benefit is superior radio transmission of queued text massages and data.

Our job is to be ready with the flying part, not waiting for better storage to come first.

The original host of our group does not serve the content. We have archived the messages for study by the world and the AWE community.

Having a VTOL drone like yours or Makani’s, and an electrical outlet in your garden as the ground station for the personal drone. The plane has a battery supplying the motors-generators during takeoff and landing operations, and being loaded by the turbines (flygen mode) during dynamic soaring.

When a favorable weather situation is detected, the drone flight towards the sea or a site with a hill and trees, makes a few turns and comes back to unload on the outlet, and starts again.

The delivered power is according to the level of the wind gradient as a first approximation.