The Kite Train system is an interesting concept. Perhaps we should start a new topic

My biggest problem with the system is the fact that the turbines are free to rotate about the axis of the tether.

As shown on the sketch, the turbines rotate around a ring which is connected to a support that surrounds the tether and squeezes it with jaws. So the turbines do not rotate directly around the tether which is not their axis as the turbines are not tilted.

Unfortunately the paddles may interfere with the nesting of the turbines on the ground.

Units are in contact only through their respective parts surrounding the tether.

We must install vanes or paddles on each turbine to ensure that they orient to face the wind.

The turbines face the wind direction collectively by the ground station being on a swivel which rotates according to wind direction.

Autonomous launch and land is a problem.

Yes. I think all elements should be stacked toward the tether end before and after operation.

An alternative idea is to use the Kitewinder system with a cable drive.

It is not easy to implement several rope-drive systems by using the same tether.

For applications where light weight is of utmost importance, such as in aerospace and motorsports, Calnetix’s high-speed motors and generators are designed to provide maximum power density while maintaining high operating efficiency and good thermal performance consistent with design requirements. An example of a power dense machine that we have designed and manufactured is rated at 100 kW and weighs 7.7 kg in a 2.3-liter volume, which is equivalent to a machine power density of 13 kW/kg and 43 kW/liter.

I put again the sketch: 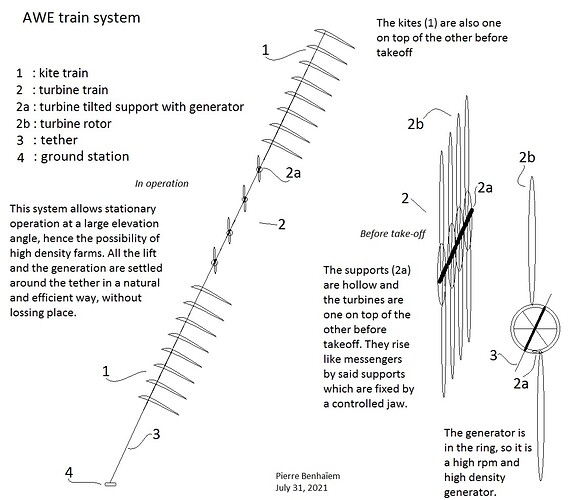 The real problem I see is the difficulty of control of both turbines and lifting kites, particularly with stacked soft kites. Trains of semi-rigid kites are usual, but rigid kites become too heavy when the system scales up. Moreover the AWE train system uses far more material than a crosswind soft kite for reeling (yo-yo) mode as an example.

So I mention it for documentary purposes only.

Yes, but the tether can twist between rotors as shown in the attached sketch. 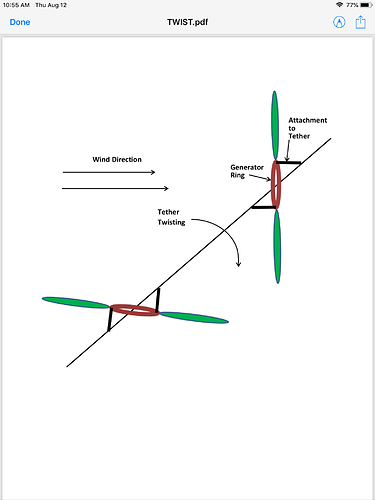 image1536×2048 167 KB
Kitewinder uses a paddle and Doug’s patents show paddles. The only way to avoid paddles is to have a rigid frame like Sky Windpower or my concept. 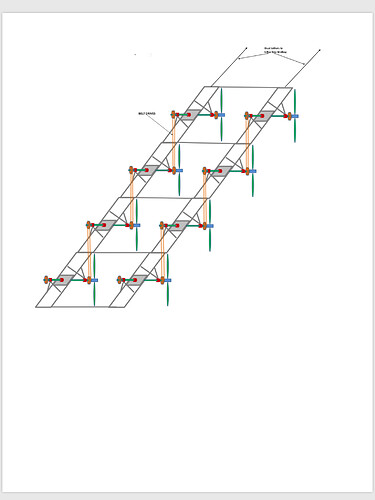 Isn’t it easier to autonomously launch and land a single large kite as opposed to groups of kite trains?

A rigid frame is too heavy. The tension of the tether should be used to stabilize the turbines, as shown in the video below. 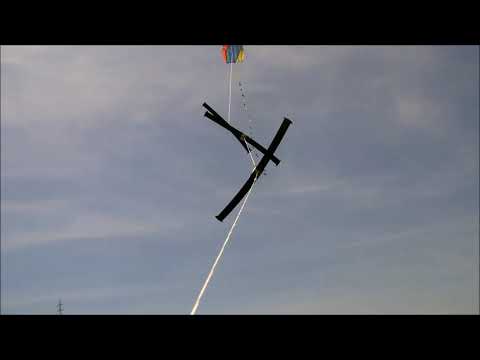 We can integrate a tube around the tether (still as on the video) then make sure that the plane of the rotor is vertical and therefore not perpendicular to said tube (unlike the video).

If you want a ring like I sketched, you just need to install spokes and connect them to the tube.

I was able to see with FlygenKite that the tension of the lines was sufficient to maintain a rotor via a support bar, even with short tubes (video below). Tension prevents twisting. 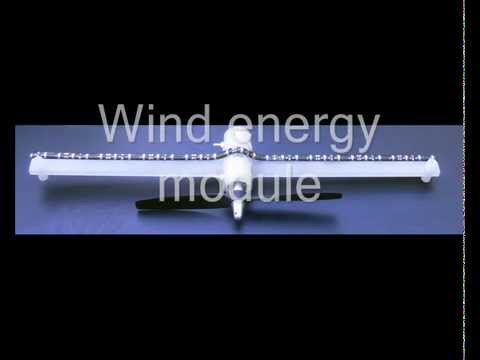 It seems that I am the only person who advocates strongly for turbine orientation. We want to maximize the power of the system especially if we are not operating in crosswind mode. The cosine cubed losses are substantial and catastrophic at high tether angles:
TETHER ANGLE % POWER LOSS
30 deg 35%
40 55
50 73.4
60 87.5
Even if the system weight is somewhat higher due to directional vanes or frames, we compensate for this by increasing the size of the lifter kite. Rag & string is cheap! 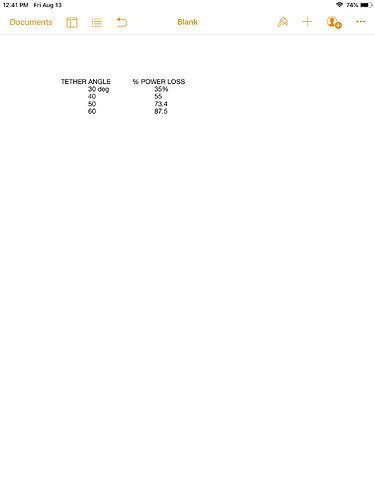 On my sketch above the turbines are not tilted. But as a result the amount of lifting kite area is quite huge and the control would be very difficult. With the same area the kites alone would produce more power in reeling mode, and far more by using crosswind flight. So I agree with @Rodread to have a tilted stacked turbine with a smaller lifting kite. The loss by cosine is more than largely compensated by material saving.