There are some projects using an helicopter-gyroplane flygen device like on:

SuperTurbine ™ and Daisy use also the lift from tilted rotors.

Now the question is if a crosswind gyroplane is suitable, knowing the rotor plane replaces the wing during crosswind operation. After first searches on the web it appears that motor consumption is roughly equivalent for gyroplanes and planes of similar weight.

Below there are two publications about gyroplanes:

Below there is a forum discussion in French language:
https://www.forum-autogire.com/t783-Theorie-du-rotor-d-autogire.htm?start=495 with this interesting sketch below (Cz = Cl (lift coefficient), and Cx = Cd (drag coefficient). The polar gives the values of Cl and Cd for the rotor plane alone in black, then the complete machine in blue) : 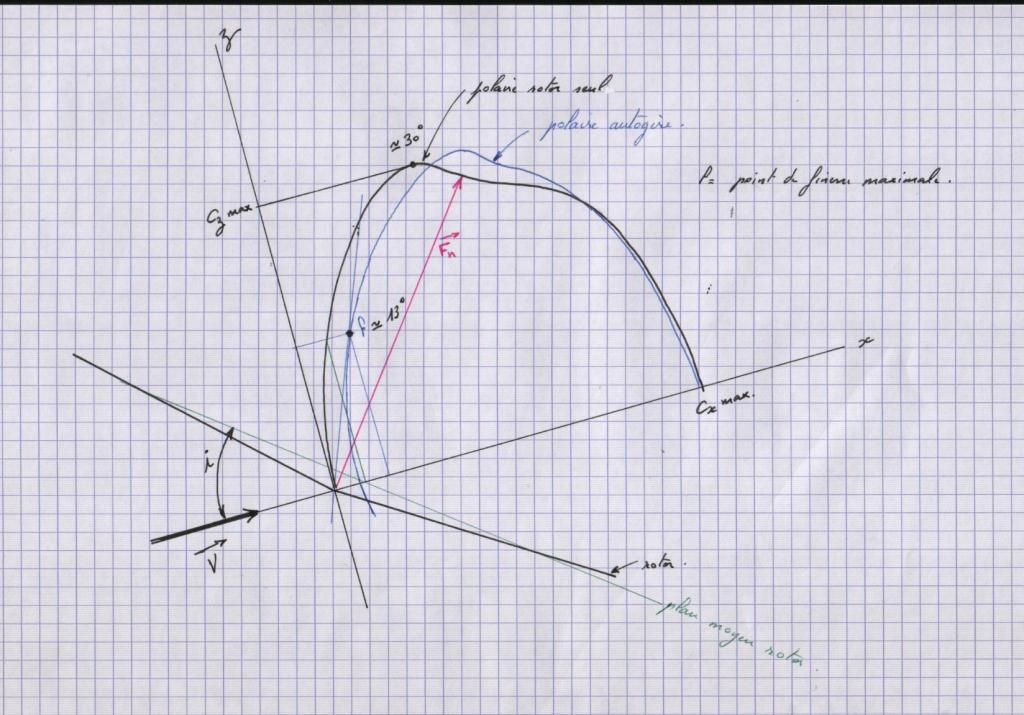 Generally the L/D ratio of the complete machine is about 2.5-4, a little more for the rotor plane alone. However ICAS provides for the MTOsport gyroplane a value of 2 to 16.8 for the rotor plane alone glide ratio for only 2 to 4 for the total aircraft glide ratio, while the speed increases, the difference increasing after 25 m/s. As a first observation it is not easy to extrapolate towards an AWES because both angle attack (relative to the aircraft, 3.2 degrees in the table 1 of ICAS at 33.43 m/s) and angle of incidence (relative to the rotor plane, 13 degrees at 25 m/s in the sketch) decreases while the speed increases, so the Cl rotor plane decreases also. And almost all curves take account of that. However the sketch above mentions the polar in regard to the angle of incidence: it is the reason why it is useful.

As a first comparison, a classical wing covering 1.7 m² like for the area of the blades of the rotor in reference, and with a L/D ratio of 8 with the tether, would generate 9671 W, flying at 53.2 m/s.

So the crosswind gyroplane could generate a higher value, while its crosswind speed is far lower, allowing less tether drag. It is due to the translation of a far higher rotor plane (55.4 m² for only 1.7 m² blade area against 1.7 m² wing area), even with a low Cl coefficient of 0.45. I do not know if such a system is really steerable, and the cons could be an excess of tip speed, leading to a limit of the crosswind speed even if the wind is very strong, in which case we increase the angle of attack, increasing also Cl, but decreasing the glide ratio.

I see traction use (by yo-yo mode for example) rather than flygen mode. It is because even with a low angle of attack the thrust of the whole rotor plane is significant, while the flygen mode would lead to a flying wind turbine with too large cosine losses in regard to a HAWT.

Beside it ICAS provides a value of 2 for the parachutal drag coefficient for the MTOSport rotor in 5.1 Vertical Descent. As expected this value is far higher than the rotor plane Cl during translation at 13 degrees of the angle of incidence.

The document below allows a more accurate evaluation of the potential of a crosswind gyroplane, above all the figure page 45 I mentioned on Bryan Roberts' Gyromill (Sky WindPower) topic:


The values concern a complete and not recent gyroplane. Certainly the lift-to-drag ratio / rotor plane angle of attack would be better with a recent rotor and a thin fuselage that does not require the carriage of passengers.

This relatively high number, even at a low glide number, is due to the large area of the rotor disk plane (55.4 m² in the example) compared to the rotor area (1.7 m²), knowing that the lift coefficient of 0.6 is a not too bad value in this context. An advantage can be the low travel speed compared to the pull, maybe allowing more safety, a possibly easier management of multiple unities as dancing kites (Y configuration), and less tether drag.

If the system is a flygen, the apparent wind would be crossed by a rotor at 15 degrees of AoA, leading to huge losses (squared cosine?) compared to Makani or FlygenKite turbines facing the apparent wind. So a flygen crosswind gyroplane does not seem to be a viable solution.

We know that the blades of current wind turbines are wide and heavy close to the hub in order to distribute the forces along the blades.

And harnessing with only the tip of the blade leads to a major loss of swept area, especially since the crosswind figures are generally very wide.

Giant rotors perhaps could be implemented without undergoing a too high weight penalty by using gyroplanes in the first segment whose linear speed is lesser, replacing said heavy and wide part of the blade. Some sketches are below: 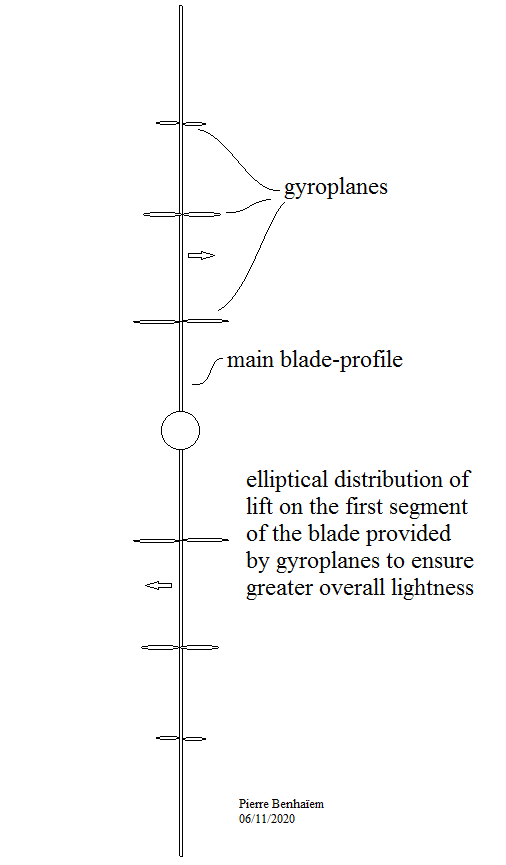 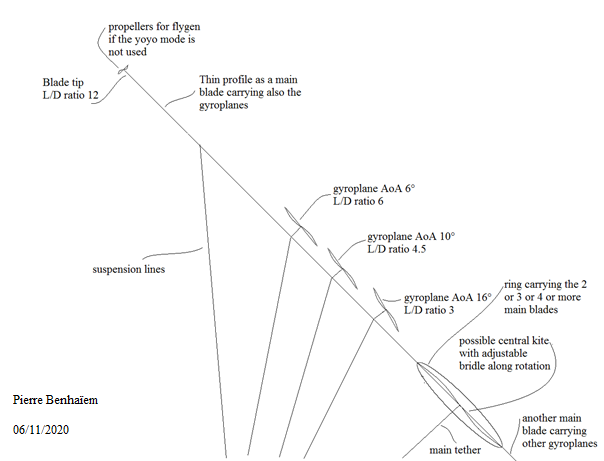 I wonder why the blades of gyroplanes or helicopters have both a so high aspect ratio and a constant narrow chord, while the blades of wind turbines are wide close to the hub then become more and more narrow. Is it a weight issue?

So a flygen crosswind gyroplane does not seem to be a viable solution.

I am not sure of this. In all configurations (and as for yoyo mode) we benefit from the whole rotor plane force (lift and drag) during crosswind flight. And also we do not have to generate electricity with the rotor by its axis, or even by secondary turbines like for the sketch below: 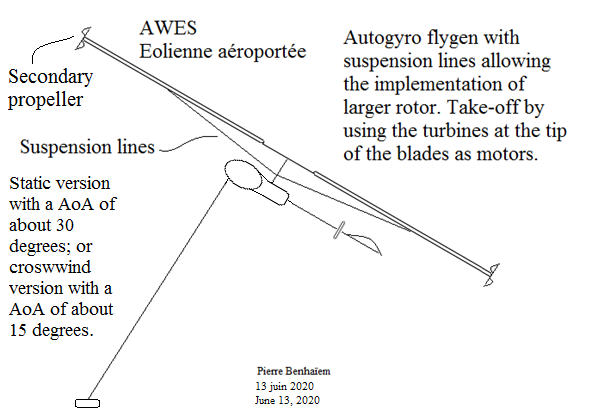 Indeed it can be better to follow the usual configuration of an autogyro, using the rotor only as a free rotor, then using the engine-propeller unit as a wind turbine. Said turbine powers the rotor only during take-off. A sketch is below: 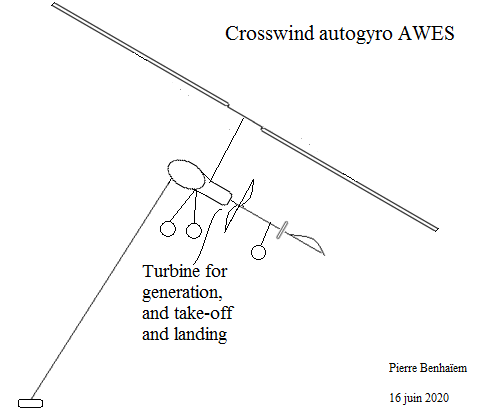 As is well known an autogyro has a very short turning radius. As a possible result it could maximize better the swept area.

A connected interesting aspect is the use of the load factor during turns. As an example a 60 degree banked turn produces 2 Gs of load factor, leading to an increasing of the rotor rpm then the resulting lift and drag force doubling. Of course some energy is used to achieve the desirable tilt.