With all this talk about how hard it is to get economically viable awes, I thought I’d share another niche idea:
One can use Kites as flying advertisement. Moving or stationary.
There are two ways this intersects with awes:

Theres also the option of using a led array on a fast moving kite during night for sky video.

I thinks this is not really AWE, rather its own thing. It could be a supporting activity for a company well versed in kites.

Multicopters are probably better suited to the video thing. (If you mean the olympics drone skyshow thing)

Really fast flying kites could work as a persistance of vision display. Like this, but at total darkness and two meters or so should be visible to the naked eye:

Not really awes, but as has been extensively discussed it’s hard to market small awes. I’d see it the other way around. This could be a stepping stone for a company to learn before making a larger scale awes.

Yes thats what I was thinking. Say a 20 wing kite rotating at 0.5 Hz. Could make a nice lighted logo or something in the night sky.

Or just 3 kites in rotation, and lights on a 60 string bridle

This could be a good idea, I dont know

Besides graphics printed on a kite, the simplest advertising architecture is as kite “line-laundry”, from novel light effects to various daytime displays. This is a baseline case- 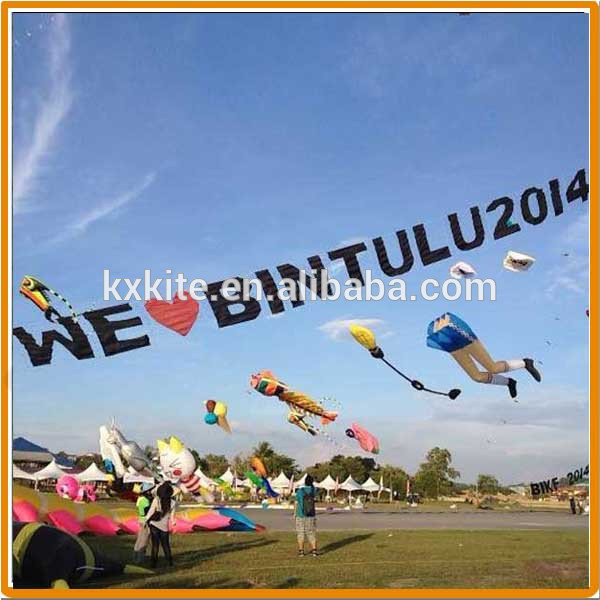 I was originally thinking of a permanent installment, automatically launching and landing.
That’s what makes it hard, but interesting.

Light pattern could also just be used as a visual guide to kite status information which in lieu of radio data may be useful for a field operator or public space user.
Rotary POV is easily done @Tom

What are some ideas to make tethers more noticable in the day, and especially at night? Power Transmission

What are some specific products or product categories that could be used for example?

Coming back to the original sytem requirements:
Is there any kite stable enough, one could simple leave to its own devices?
No control, just staying downwind. Being reeled in onto a docking point when wind isn’t enough.
If wind = enough:
reel out
else:
reel in

Yes plenty of those around. Usually they have a certain windrange they operate in.

Its an art of its own. People do this stuff professionally at kite shows

That’s what I’ve always thought.
The lack of anyone even having a kite that can launch and land automatically, while talking of world kite-energy domination, is why I always say: “idiots, idiots, idiots”…
I don’t see how anyone could get much stupider than that.

Only expert kite flyers can currently reliably fly kites. Equivalent automation will take a long time to perfect. Doug simply lacks realistic patience for kite automation to develop within the wonderful R&D community. None of them are “idiots”.

There are also several classic kites and new designs that do in fact self-relaunch reliably. Show-kite pros these days often simply wait for their kites to self-relaunch in fickle conditions. Substituting digital automation does not add much at first, except novel compounded failure modes.

Veering back on-topic, the most versatile night-flying advertising is digital projection on a suitable kite. Projection mapping on 3D figure kites will be a fantastic spectacle. kPower is developing kite concepts along these lines for AWEfest effort. AWEfest was Wubbo’s concept for AWE’s own Flying Advertising.

Lets not forget that Eddy himself advertised with kites in the Golden Age. Meaningfully decorated kites are very ancient. As seen fit, AWES have been and will be covered with ads.

I think projection mapping is a good way, but a potentially big problem for aircraft. From what I gather you dont send high intensity light into the night sky for these reasons.

After thinking about this overnight, I think the following setup could work:

In theory you could with little effort show live video inside the area of the ring.

I asked around, and eg concerts would buy this as a service.

I am not sure if this could be made profitable though. Your customers would often be let down by lack of wind (usually we have very little wind nighttime) or too much wind, or rain, or lack of launching space, or QHSE considerations etc

MVP with a persistance of vision display:
Build something like this: https://www.youtube.com/watch?v=1CB3UVmEcB0
Stick it on a large enough kite you control manually. Remote control it to start the animation at the right point it the flight pattern.
Mainly for beach events or orther events where there is enough space.
Should be really easy to do.

I was thinking more like the monkey electric bike wheels…

M232. M210. M204. THE BRIGHTEST AND MOST DURABLE. We are the world leader in bike wheel lights. Our LED-based lights are the brightest and most durable on the market and provide 360 degree visibility for commuter cyclists. Each model features bright,...

I asked around, and eg concerts would buy this as a service.

I am not sure if this could be made profitable though. Your customers would often be let down by lack of wind (usually we have very little wind nighttime) or too much wind, or rain, or lack of launching space, or QHSE considerations etc

Probably not.^^
One could make a similar product with a large, light enough to be safe to fly overhead, tethered and wired “helicopter” drone, flying straight up.

Precise projection-mapping is in principle capable of avoiding wasted projection into the night sky. If leakage is not coherent laser light, the air-traffic conflict issue is less of a concern, not subject to specific laser ban.

My son had one of those