Rotor surrounding a round kite

The scalability of the rotary AWES can be achieved by moving the blades or wings away from each other, increasing the swept area. Daisy is an example where the central part is hollowed out and ring-shaped.

Another example, this time with a central parachute, but rotating with the blades like Daisy’s ring, is shown below. Intended for use in reeling mode, the scalability results from the juxtaposition of three elements (2 wings and the central parachute) at their maximum respective dimensions. Thus with the largest ram kite GigaFly (60 m span), the largest parachute (30 m diameter), we therefore have a potential 150 m diameter rotor. 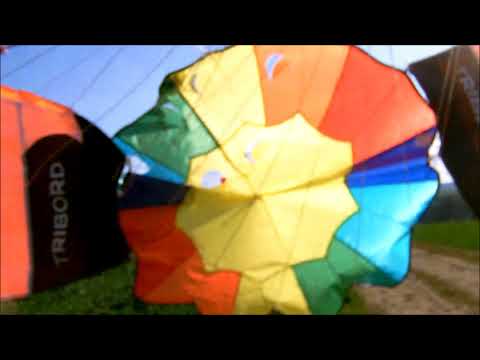 But perhaps it can be advantageous to place the lifter (round) kite between the blades so as to cause them to move away as indicated above, but also so as to generate lift, avoiding (if possible) an additional lifter kite which is settled far above, as usually made. 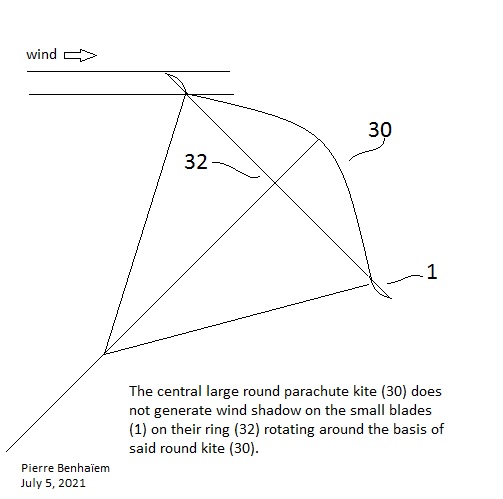 Two power-take-off (PTO) ways are envisaged: by generators aloft (flygen mode), or by rope drive systems. As a start the pressure within the parachute can be useful to ensure some annular rigidity.

I don’t know if it is really feasible: deformations during flight can lead to the requirement of a heavy rigid structure. Initial experiments were difficult but perhaps I am not skilled enough.

And also two counter-rotating rotors are required to cancel the torque each other, in order to prevent the rotation of the central round kite. These rotary kites are far enough each other to allow using fully their respective areas.

Below is a sketch for a system using rope drive system. The main principle: a pulley has several grooves allowing the conversion of the rotation of the ring of the blades into a perpendicular motion from the kite toward the ground. In addition in the bottom kite a gear is added and is connected to a reverse gear with its pulley in a way that the two rope drive systems are connected from the top kite to the ground via the bottom kite. 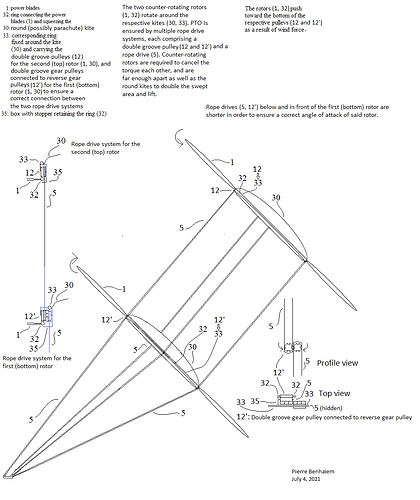 Below is another sketch with generators aloft (flygen mode). This system is heavier, but not too much if light, high speed and durable generators are used. Take-off is also easier by using generators as motors. 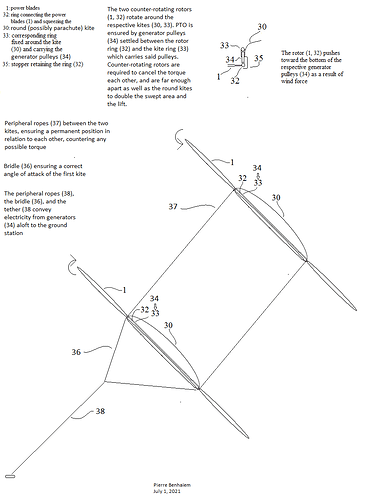 Thanks for your possible observations.

Using the hot summer days for doodling new AWE designs? Im guily of this as well, though not to the same extent as yourself.

I am still trying to figure out all the details of your sketch. Initially I believe the parachute will have a very high angle of attack to the wind. So it will be quite draggy/pulling. I also expect it would degrade the wind quality of the outer kites substantially, even though it is not directly in harms way.

Having the lifter at the same altitude as the outer wings sounds like a good idea if you can sort out the handling at scale.

I expect the sliding ring around the parachute is probably easier implemented as a smallest possible device at center of rotation. This also means that the parachute would need a bridle and be somewhat elevated. And no easy way to fix the bridle alignment to face the wind. So maybe throwing a tail into the mix. At this point it will not be substantially different to Daisy though.

Thanks for your feedback @tallakt.

Initially I believe the parachute will have a very high angle of attack to the wind. So it will be quite draggy/pulling.

Yes. As (in a first approach) the blades are parallel to the basis of the round kite, a very high angle of attack (AOA) is required to mitigate cosine loss of the blades. It is the reason why I thought about a parachute kite which usually flies with a very high AOA, above 30 degrees as indicated by chinese umbrella description.pdf.

So it will be quite draggy/pulling.

Yes. Perhaps it can be good if the rope drive system can be implemented.

I also expect it would degrade the wind quality of the outer kites substantially, even though it is not directly in harms way.

I fear it too.

I expect the sliding ring around the parachute is probably easier implemented as a smallest possible device at center of rotation.

Sure, but by making it, you loss the PTO at the periphery of the parachute and the inner rotor, where the linear speed is high, and where rope drive and high speed generator aloft systems could be implemented.

And no easy way to fix the bridle alignment to face the wind.

I can have this problem. A possible solution would be using multi anchors on the ground. But my initial experiments were not successful in this regard.

I agree with your reservations. That said I mentioned these designs because I am not quite sure that mentioned problems cannot be overcome. If they could be, I would see two possible advantages as relatively light PTO (rope drive or flygen systems) could be implemented, and the reachable altitude would be less limited (as for @Kitewinder Kiwee). Thus the chance of implementation remains limited.

But this topic concerns also the rotor rotating with the central parachute as shown on the video (tiny lifting kite of 0.2 m², wing span 125 cm, parachute diameter 90 cm, diameter of the whole rotor 340 cm, elevation angle of less than 10 degrees with said tiny lifting kite). In this case the parachute is no longer really a kite because it turns. It is the same for the wings. The rotor is only a pull device that could be used in pumping mode as for RotoKite. A minor advantage of the central parachute is increasing rotor diameter. But I see another possible advantage for studying an easier control of depower mode during reel-in phase. 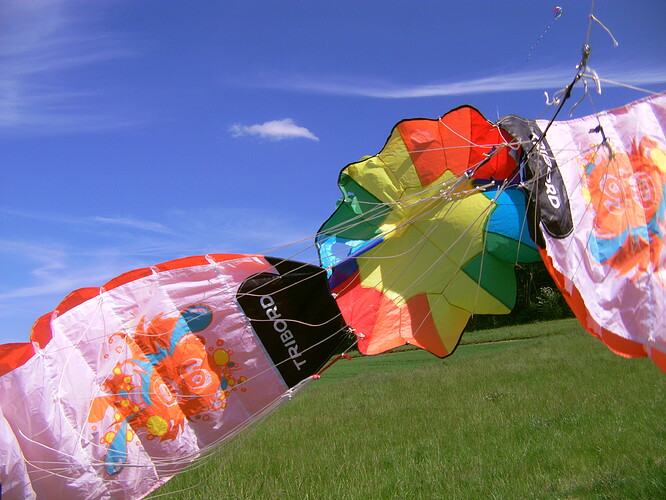 The same with a larger lifting kite of 2 m²: 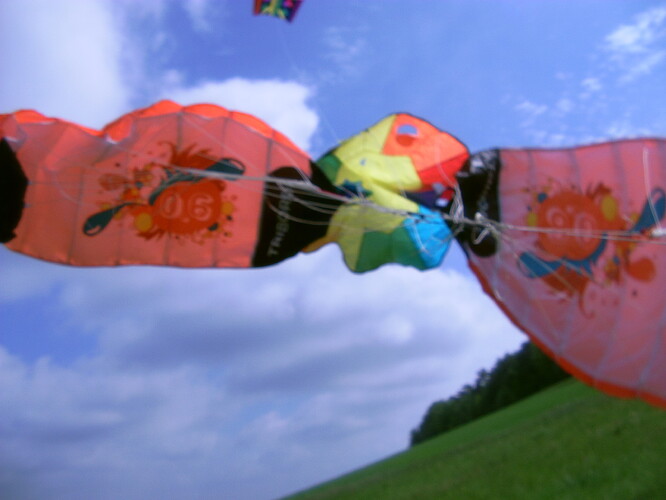 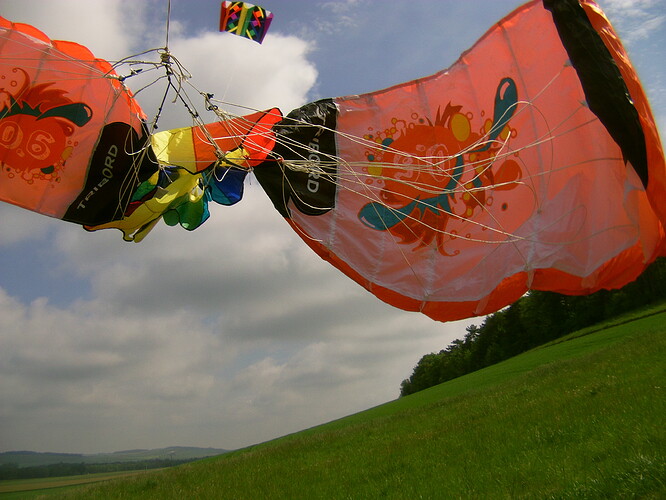 The problem I see with rotary ring kites is bridling.
Either they have constant bridle lengths so their AoA is too high and they rarely take off without assistance
Or
If you have a rotor with varying bridle lengths it has to stay very active

Thanks for the links @Rodread.

Indeed bridling is a concern.

The sketches of my initial post represent a fixed central round kite: only the blades with their common ring rotate. So the bridle (for flygen system version) and also rope drives (for rope drive system version) are or different lengths, being shorter in front of the bottom kite. That said a parachute kite is not very stable by itself: some anti-drift panels could be implemented as for any ram or SS kite. And an almost round kite usually used as a lifter will have to comprise a long tail, and its angle of attack can be too low for the blades rotating around it. Here we speak about stationary rotors with the goal of delivering continuous power.

On the other hand all my photos and the video represent a rotary kite with a central parachute rotating with the wings, and constant bridle lengths: such a rotor cannot fly by itself without a kite lifter (for me it was tiny 0.2 m² or larger 2 m² lifter kites). Here we speak about rotary kites used in reeling (yo-yo, pumping) mode. The central parachute could be something rotating like the one on the video below, and with additional wings: 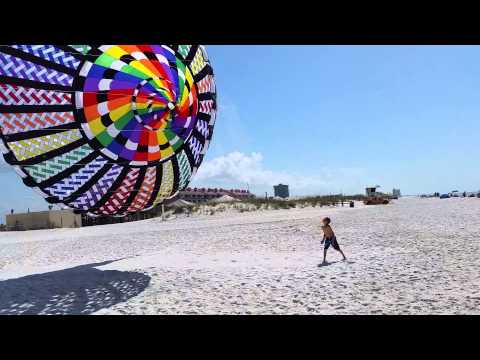 @PierreB I think what I dont think is easily achieveable is a sufficiently lightweight sufficiently stiff rotary mechanism to be mounted along the edge of the center kite. I think it would have to be some kind if pulley on a string concept, but this would not allow the center kite to support the structure. At least I dont see how it could be done in a very obvious way. Until that mechanism is in place I am afraid the overall design is left as a thought excercise for me. If you did figure out how to build it, I understand you may not want to share

I realize that the central flexible kite would not provide enough rigidity despite the air pressure which remains still very weak and irregular. Consequently all the rigidity should rest on the rotor ring or / and possibly the parachute ring, which is not possible on a large scale. In practice it is a safe bet that the deformations by wind forces will prevent the ring to rotate while driving the pulleys for rope drive transmissions.

I had thought about this stiffness problem for a moment and then forgot about it. I just found again a few sketches of rigid devices apart from the kite lifter.

One of the objectives is to take the power to the periphery of a large and stiffened hub like a bicycle wheel, and with small pulleys for the rope drive transmissions instead of only one central large pulley compared to the hub (as for Kiwee), and which can become heavy if the device scales a lot.

I think there are some possibilities for rigid rotors. But rigidity and lightness are difficult to gather at high scale. And counter-rotating rotors can be required, adding mass and complexity, even with some arrangements mitigating them.

And this becomes another story, leaving the topic little by little.