This is an interesting investigation. To avoid dividing the forces and to allow facing all wind directions, I propose a simplified design with only one ground station gathering the anchor, the pulley working the generator. [TwoKiteSystemModified] 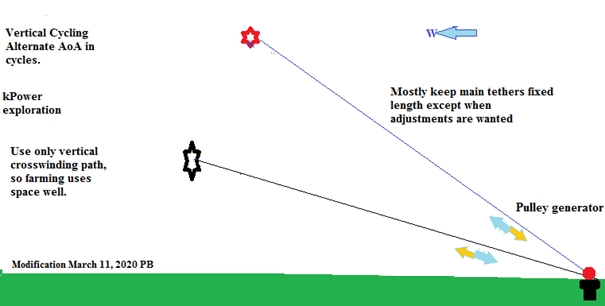 Showing now in this topic are two distinct systems, the topic starter and the now the interesting mod brought in by Pierre. Both distinct systems may be investigated. Being distinct the two systems will have their specific challenges, pros and cons. Thank you, Pierre, for wrestling with the topic system and coming up with the shown “PB” mod. I am thinking that the PB mod is so distinct that it deserves a topic focus on its own. Please modify the drawing so that “March 2, 2020 JpF kPower”…

@JoeFaust I agree with your comment. However, I would qualify your expert opinion about “a close cousin to twin wings in pumping mode” as this does not work in pumping mode (yo-yo) but rather in pulley mode by tether transfer from a kite towards another kite. It would be a distant cousin of US 3987987 figure 5 but with only one anchor-pulley and two kites instead of two anchors-pulleys and one kite.

Am I right to understand that this is like KPS’s early twin kite system, except in the trajectory? (up/down vs spiral/return?)

I mentioned this design during the discussion. For what I understand KPS used two winches while the present design implements a pulley to transfer the tether between both kites. Moreover in the current design the down path is realized by the trailing edge.

That said I think the use of such a pulley or some arrangement comprising a pulley could also be possible with spiral/return trajectories. An advantage could be removing the excess of tether, the winches and their motors to recovery it at each phase. There would be only one generator connected to the pulley and delivering energy in full time, from one then the other kite alternately. Rigid kites could be used unlike for the vertical path.

Some sources below can allow to analyse in a deeper way:

The KPS kite power technology has been researched and developed since 2011 by a team of highly experienced engineers. We have designed our system to prioritise efficiency and reliability.


From the “Technology” page above:
The tension causes a 100-200m line to be spooled out from a drum on the ground, which is connected to a generator – thus creating electricity.

The winching system boo shown in Figure 5 comprises two winches 5o5 of a type substantially similar to the winch 1 described above.

Among possible cons, as one of the two kites is fully (no loss) or partially (loss similar to any yo-yo system) depowered, a lack of tension on the side of the pulley toward the depowered kite can occur. If an arrangement simple enough can be implemented (such like making several turns around the pulley to assure a correct enough pull transfer while the tether of the depowered kite is easily recovered to go to the other side) this system could be workable for this issue. If no, the KPS (now KiteMill) double winch is a possibility. In all cases the (more or less) vertical path can allow a better density.

Supporting discussion with clip from the referenced KPS page that shows the two pulleys, one each for each wing…

the referenced KPS page that shows the two pulleys

These are two independent winches for what I understand and by taking account of the sources I quoted above. Pulleys and winches are different.

Thanks, Pierre; I know pulleys and winches are different So, not a pulley fair leading into the winch? 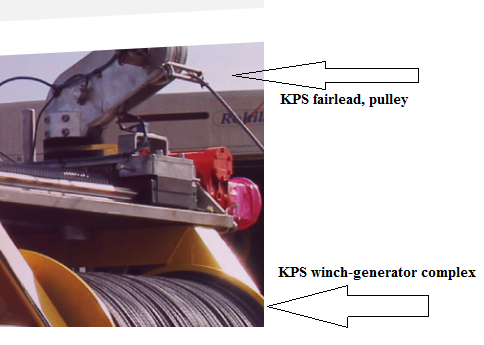 The “rail” mentioned probably rolls on its central axis.

The referenced KPS page represents two winches. There is a pulley in the system I describe, but not winch as I repeat.

So the main tether goes through the anchored pulley-generator. That main tether has a wing set at each end. Aim is to have the flight paths of the two wings stay close to a downwind vertical plane which plane is perpendicular to the smooth-normalized earth surface ordinarily; such, in part, has a motivation to well use the land space and airspace and permit possible units aside of the first unit system. Flight control of the two wing sets is aimed to drive the pulley-generator and thereby generate electricity. Tautness of the full tether that joins both wing sets must be so that a net one-direction movement occurs in order to drive the pulley-generator. For a one-direction in a time period to occur, one of the wing sets must pull more than the other wing set. So, needed will be control of the two wing sets so that cyclic imbalance of occurs; when enough line has driven the pulley-generator, then a reversing of direction is the aim wherein the imbalance of the wing sets’ pulls are enough to drive the pulley generator again, but in the opposing direction (mechanics to be workout out).

Suppose full slack is nearly obtained by wing-set# and the wing-set#2 pulls very strongly and drives the pulley-generator and pulls through some of the joining tether. The pulling through of the tether will be edging away the near-slack of the other approximately depowered wingset#1. Following some generation the roles of the two wing sets will be controlled to reverse. And let the cycle continue. Generation will be nearly constant; some lag will occur during cycle direction changing.

That said I think the yo-yo 2D vertical path method can be more promising as the kite remains in the most powerful zone within the flight window, and also because its implementation and management are simpler at any scales.

These configurations look like they want to be a “laddermill”.