Hi Rod/all
Always a bit doubtful that I’ve got anything useful to contribute…and no doubt I’m barking up the wrong tether here (or someone else has already been down this route and dismissed it) - but just in case the situation is otherwise…I wonder if anyone has investigated tensairity in regard to AWE. It seems of some relevance to the current situation (esp. re the Makani experience): personally I’ve always felt a bit nervous about having a lot of rigid material whirling about overhead. This is partly from the safety standpoint, but even if the contraptions were well out to sea or over tundra, the issue of catastrophic failure (and therefore the need for constant monitoring) seems a pretty serious one. It seems to me that this applies to virtually any AWES design. Of course one then runs up against the relative aerodynamic inefficiency of soft aerofoils. Tensairity would seem to offer a way of minimising the amount of rigid material in a wing/blade - and hence the potential for buckling failure, but the versions as advertised still have a rigid compressive spar running the length of the blade. I wonder whether this spar could be replaced by a semi-rigid one - either a high-pressure inflatable tube or rigid segments, say not more than 10% of the overall length with joints between them which would remain pretty rigid under normal conditions but which would flex under higher bending stresses. (This would also be the arrangement in the trailing edge which is difficult to taper in a pure inflatable.) Of course introducing this level of complexity into the blade/wing architecture only makes sense for blades over a certain size - ie. larger than what most people seem to be working on, but not necessarily as large as existing HAWT blades. If this were feasible, the advantages both in terms of deployment (which would be essentially by inflation) and survivability (by deforming into a relatively less efficient, lower velocity configuration) would seem to be worth investigating.

Inflatable structures have very interesting properties such as low weight, compact transport volume and easy set up. Both manned and unmanned aircraft… 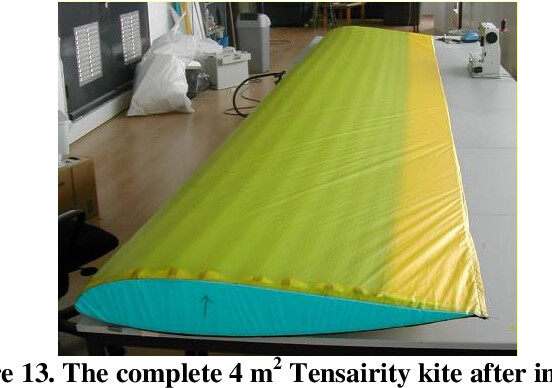 The complete publication is available for free on:

Theoretical investigations show, that the weight of a Tensairity structure is comparable to an optimized truss structure and much lighter than a simple inflatable structure for slenderness values typical in wings.

IMHO as the air pressure is not very high the profile can be deformed by the apparent wind, lowering aerodynamic performance, but less than for any simple inflatable wing.

There are also other topics about Tensairity in this forum, and also a video below: Thanks for that @philip Tensegrity in AWES is a great suggestion given the stiffness to weight & volume ratios.
Please Never be shy of coming forward with a suggestion or question.
I hope we’re not too aloof on this forum to be accessible.

Tensegrity in AWES is a great suggestion

I am not sure which is which though.

Just to take it a bit further - I thought this paper brought up some interesting points…particularly pages 14, 15. The two particular bits which struck me were 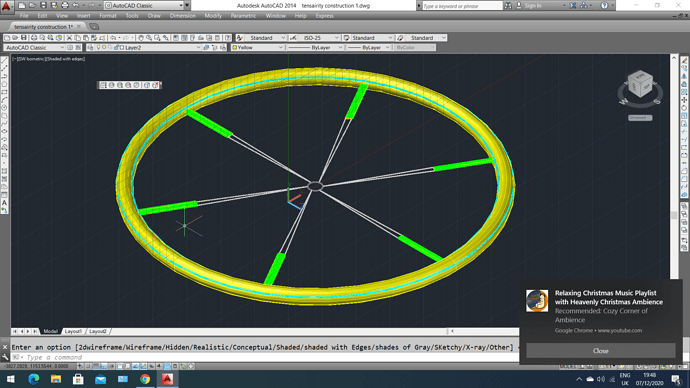 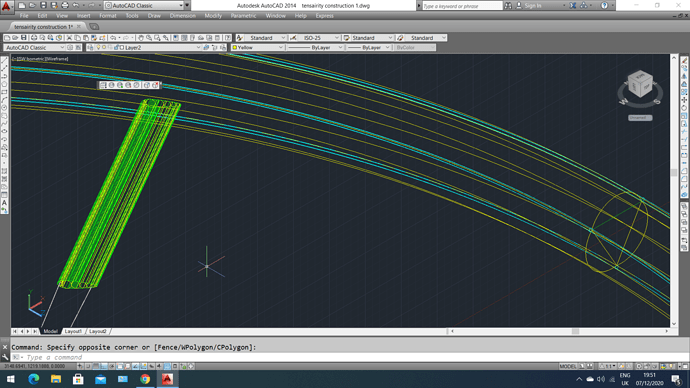 Another development within the Tensairity concept was the replacement of conventional compression elements (like aluminium) into water filled tubes (Figure 16). This has the advantage of reduced weight and transport volume (Pronk, Maffei, & Martin, 2009). It has however a big disadvantage of reduced safety, because a single leak in the element would cause the element to fail under its load.

For that purpose steel is hard to beat.

Thanks for feedback: I’m not sure that steel (or carbon fibre) really works if you’re trying to assemble a large ring in deep water. The advantage of having no rigid elements in that situation would seem fairly compelling - ie. you’d only need to transport fabric, flexible pipe and pumps. I appreciate the safety issue they raise - I think this was in the context of having a large canopy collapsing on people’s heads. The life expectancy of MDPE pipe looks like it would far exceed that of other components (though not sure how this would be affected by the degree of flexural movement encountered in a tensairity structure as the 50 - 100 yr + figures quoted are for fixed/buried pipes). Anyway, the same pumping system used to fill and pressurise the structure should also be deal with minor leaks, at least pending repair or to allow a controlled collapse.

By the way…in case we’re talking at cross purposes…I’m thinking in terms of how a Daisy (or other AWE) could scale up to the MW range - (and be situated 10s of km off-shore) - clearly a complicated internal ring structure doesn’t make sense otherwise.

For an AWE use (in air, not in water) ETFE foil has interesting properties such like high lifetime, transparency limiting visual pollution, lightness, reasonable cost. ETFE is described in page 11 of the pdf about Tensairity ™.

in air, not in water)

Thanks Pierre - yes - I was using “in deep water” in the sense of “out at sea”: the assembly (ie. inflation) would be taking place on the surface (from the anchored generator unit) but the turbine would (hopefully) rise up into the air. ETFE for the outer skin (and internal membranes) sounds as good as anything (unless anyone gets around to making usable graphene sheets!)…Tallakt was addressing the issue of the internal compression elements. If these are to be pressurised fluid/water filled tubes - then the considerations are essentially plumbing ones.

I’m not convinced yet that tensarity is a great solution for a ring kite main-ring.
The wind energy extraction capacity of an AWES wing will allow us so much for rotation, so much for lift and even a bit left for expansion. The larger the scale of wing required by the tensarity ring solution, the heavier/useful output it’ll likely to be.
We can add many small wings but only to the point the rotor is too solid to be efficient.
Also an inflated beam means more drag in take off and in flight.
Pretty sure we can find less voluminous more lift inducing ring forms.
In flight the ring of a daisy rotor is mostly in tension.

State of AWES - Your Opinions

I agree. However Tensairity ™ is at least a marginal part of the state of AWES R&D.

Yes. I think that’s a good idea. There are already similar designs but then made out of steel or aluminium. See: Innovative Wind Turbines - An Illustrated Guidebook (Vaughn Nelson) For example: https://barberwindturbines.com/the-turbine/turbine-specifications

Note that those designs are mostly rim drive.

I don’t see the need to immediately think about MW installations. Just make something in your garage first.

Tensairity or just an inflated ring more akin to LEI kites? Is the LEI kite tensairity?

Tensairity or just an inflated ring

The Winflex prototype shows us that just using an inflated ring doesn’t really work – or that they didn’t know how to make it work. A LEI kite doesn’t have the rigid element so that wouldn’t be a tensairity beam I think. You can’t do this with a LEI kite: Tensairity demonstration bridge

If my understanding is correct you’d need a rigid element to spread the load. So I wouldn’t know how you could use water instead of aluminium say.

Also an inflated beam means more drag in take off and in flight.

Yes, unless the Tensairity ™ ring is not the periphery of the rotor, but only its hub. Said hub is used for torque transmission by tethers as for TRPT. The internal blades are also spokes and provide some small but not negligible power. The external (rigid of flexible) blades provide the main power. The Tensairity ™ hub rotation linear speed being at least two times lesser that the tip of external blades, its drag is far lesser. The Tensairity hub helps to better sustain long blades. External and internal blades can be the same blades. Tensairity ™ rings could also be used for the torque transmission close to the ground. Perhaps Daisy could scale more by using judiciously Tensairity ™ torus. 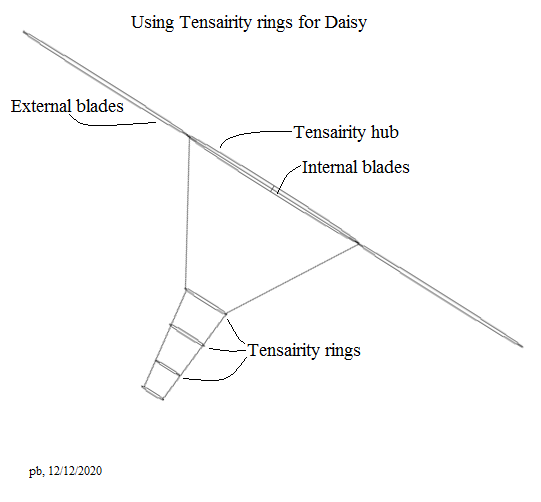 I really hope somebody tries and publishes the results