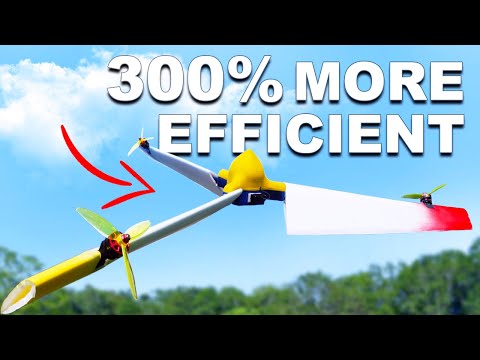 The main rotary blades carry the secondary propellers-motors, and are controllable.

By adding a conductive tether and making some adaptations, a rotary flygen AWES (a little like Bladetips Energy system but with more effective control) could emerge.

Soon to progress in some AWE concepts, it will be enough to wait for the news concerning the drones.

On the video, at 8: 17, the drone flies in linear way (one of its 3 ways of flight), like a plane: it looks like the two inferior blades generate some lift while the becoming central blade works as a stabilizer, the propellers-motors becoming horizontal thrusters.

So an adaptation or use as a crosswind flygen AWES could be envisaged, leading also to an advantage for the potential of low radius turns by rotation. A flight combining crosswind and rotary modes could be achieved. VTOL is already there. 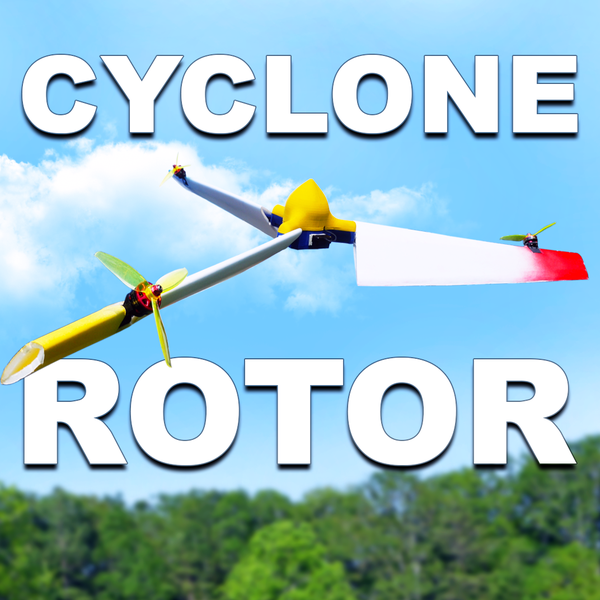 This is a highly modified tricopter drone design that leverages arm-mounted wings to significantly increase hover efficiency by spinning. A single standard sized servo housed in the center hub rotates all three arms simultaneously and provides...

I suggest to plan an AWES making on the basis of this rotor drone. The same AWES could be used according to its three flight modes: first VTOL mode (only the secondary rotors rotate, not the main rotor, and the generators are used as motors) for takeoff and landing; second operation mode as a rotary tilted AWES, for individual use (feeding @dougselsam 's house for example), or for reaching high altitude winds without undergoing excessive tether drag since the tether does not move; third operation mode as a crosswind tricopter (the blades are fixed and works as wings) kite to maximize the power of this envisaged AWES.

I always had the impression that the small, fixed-pitch rotors of typical multi-rotor drones had to be using a lot more power than necessary.

I think a difference now is that the main blades are pitch controllable and provide significant lift while inducing the correct yaw angle to the small fixed-pitch rotors. This ability should make it easier to control both the generation and lift of an AWES on this basis, without having to use a kite lifter.

This ability should make it easier

I don’t see how it does. To do away with a lifter kite I think you’d need to tilt the rotor up a bit from the tether angle to counteract the weight of the system, like I’ve sketched here, which this doesn’t do. Something like that doesn’t seem a hard thing to add though.

I don’t see how it does.

By active cyclic pitch control of the blades during the rotation, as mentioned on various topics, Cyclic pitch control for Rotary Airborne Wind Energy Syst. using a rotation compensating slew plate for example. During operation this rotary AWES is tilted as some other rotary devices, and the angle of tilt (and as a result the elevation angle) is dependent from the average pitch angle of the blades of the main rotor during rotation. So another device (which possibly could be useful when there is no pitch control) is not needed.

That said, as presented on the video (0:14), the pitch control of the blades seems to be collective for this rotor drone. At 1: 38, the shown mechanism seems to include a collective control.

Individualized cyclic control of each blade is required for adaptation to a rotating AWES in order to eliminate the need for a pilot kite.

I always had the impression that the small, fixed-pitch rotors of typical multi-rotor drones had to be using a lot more power than necessary.

On the video at 5:51, there are two curves about spin rate vs. power draw: no wings (more power draw); wings on (less power draw).

Say we put small turbines on it instead… Spin them up in an inefficient way.
and still
Got the big blades in autogyro pattern using wind inflow on a kite line,
Can the turbines be high inflow like a simple Makani? or a BladeTips Energy system but flygen not yo-yo
Needs a heck of a good slip ring

The blades of this rotor drone are straight blades like wings, not twisted blades like those for wind turbines or propellers. The small turbines are not settled quite in blade tips, but on the leading edge (as for Bladetips or Makani wings).

So one can expect that a flygen adaptation of this rotary drone could work in rotary or crosswind flight respectively like some controllable Bladetips rotor or Makani wing, above all if the tricopter mode is used (video at 8:18) in crosswind flight.

Below is a sketch of an adaptation of this drone for an AWES: 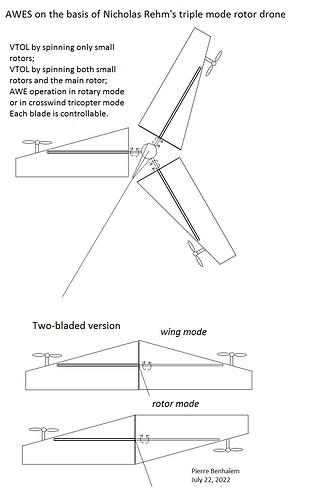 Each blade is controllable.

On the video at 5:51, there are two curves about spin rate vs. power draw: no wings (more power draw); wings on (less power draw).

Yes I understand that, Pierre. That is the whole point of the video. Calling it a “paradox” seems like clickbait. To me, “of course” it uses less power. What I’m saying is anyone who understands how aircraft work in general, can see that a small, plastic propeller, spinning fast to sweep a small area, is not a very efficient way of carrying a lot of weight. Hence the helicopter, gyrocopter, etc. with more lifting surface area and swept area per unit weight, and the ability to glide (autorotate) safely to the ground in the event of a power loss.

Generally drones have small rotors connected by long arms. This drone has also relatively big wings replacing the arms, in addition to the small rotors. It is the reason why it generates more lift for the same power and diameter.

the reason why it generates more lift for the same power and diameter.

It’s the same reason a regular airplane uses less power to stay in the air when flying horizontally, versus trying to hover with the nose pointed vertically toward the sky, and the same reason a sailplane has more wing area still, than a powered airplane. Lift is a momentum transfer, so if you move more air downward, slower, it requires less power than moving a small amount of air downward at a faster speed, because the power it takes to accelerate air is proportional to v^2. If, after 14 years of AWE, anyone still needs this explained, I’d say they should get up to speed on basic theory of flight and aircraft design.
But I guess in AWE. we’re always stuck in first grade. For many, knowing what they’re doing would take all the fun out of it!

I think this is an excellent design to make yourself and possibly improve upon even if just as a learning vehicle. It’s small and affordable, and the design and software is already available. If you want to change something, or one variable at a time, you can ask for help or feedback here or elsewhere. And it teaches relevant skills in aerodynamics, fabrication, and programming, and even AWE.

This three-mode drone can also fly like a plane, in tricopter mode (video at 8:18, and text of the video), two blades being two wings, and the third blade being a vertical stabilizer. In tricopter mode, the main blades don’t rotate, and the small rotors are thrusters, the tricopter flying more or less horizontally.

I guess the wing airfoils must be symmetrical (less lift) (?) to fly like an airplane using two blades as wings, or maybe there is uneven lift from the two big blades-as-wings, and they “just get away with it.” At that point you might as well just have a regular RC airplane with enough thrust to take off vertically. It would be more efficient.

I guess the wing airfoils must be symmetrical (less lift) (?) to fly like an airplane using two blades as wings, or maybe there is uneven lift from the two big blades-as-wings, and they “just get away with it.”

If you look at the video, you can see that all blades are symmetrical: it is because the pitch control is collective. As a result the two blades assuring the lift are not quite optimized because of their adapted roll angle (which adds stability?). An individual pitch control of each blade could allow a higher optimization of these blades, in addition to allow an AWE use as a rotary device without the need for a kite lifter.

That said having a three-mode drone assuring both VTOL, rotary, crosswind (tricopter) modes is interesting, and would lead to a higher maneuverability, which can be a major key for AWES, above all when meteorological conditions are changing, when quick landing is needed by mitigate crash risk.

If you look at the video, you can see that all blades are symmetrical: it is because the pitch control is collective.

When I said “symmetrical” I was referring to the airfoils of each large blade. A “symmetrical” airfoil is the same top and bottom, like on an aerobatic plane which can fly upside-down as well as right-side-up. There is no “flat bottom side and curved upper side” on such an airfoil, but rather identical, curved sides top and bottom.
Upon closer scrutiny of this video, symmetrical airfoils indeed appear to be what this craft has.
I only mentioned that because if this craft had regular airfoils, it would be more difficult to make it fly “like an airplane” since one wing would want to lift up, while the other wing would want to lift down. Only a high angle of attack could save it at that point, if at all. I’m thinking regular assymetrical airfoils on the “wings” (curved top, flat bottom) would increase performance and further lower required power when spinning normally.

Perhaps I misspoke. I mean that the collective control induces an identical pitch angle for each of the wings.

There is disk loading and also L/D of the prop blades vs arm wings. Then there is the fact that the faster the airflow over a prop, the less efficient. Anyways… doesn’t make a lot of sense for AWE, as the wind will be spinning the thing around, and the smaller props will be in the way. Only if you go for an electric power transfer [energy conversion type] would those smaller props be useful as turbine blades.

I am not sure also how useful this is at bigger scale, due to the amount of material needed to make it rigid enough, and together with the limited swept area. My hunch is that this could not compete with a HAWT on paper…

This is really cool. I think hinged arm wings with a reflex camber could make it more controllable too… Though the presented design is good as well