About train networks, perhaps some similarity with network kites, an author Lorenzio Fagiano being an AWE expert: WOW, maybe one day, when the kites flown in a network are as sophisticated as trains.
For the moment …I’ve only flown foam wings with sticks on strings. As for coordinating NMPC over the set of kites in a network…for now, I’ll leave that to the strings

Haven’t read the whole thing, but for example:

Regular wind turbines are massively expensive. They are heavy, which means they cannot be moved and worse, producing them consumes huge amounts of energy. Worst of all, they are too small. They barely touch the slowest winds in the atmosphere. More valuable, higher power wind is higher up.

This tells me nothing. And it sounds biased, so “I” don’t trust it. How expensive, how heavy, can they really not be moved, how much does energy and resources does it cost to produce them, and so on and so on. I would make it easy for the journalist and give sources that back up your concrete claims and statements. The Windlift Technology employs proprietary designs and engineering to capture and store wind energy in the most efficient and reliable manner. Affordable clean energy for everyone, everywhere. Evaluations should comprise maintenance (if some elements have a low lifetime, more material is used), real efficiency, land use…

Waiting for papers mentioning the pros and cons with details.

I got some time in the field on Friday. Only 4 hours of wind over 4m/s. Where has it all gone?
First few tests were all single rigid rotor Daisy type.
(Should Daisy method just be called mechanical drag mode airborne wind energy?) 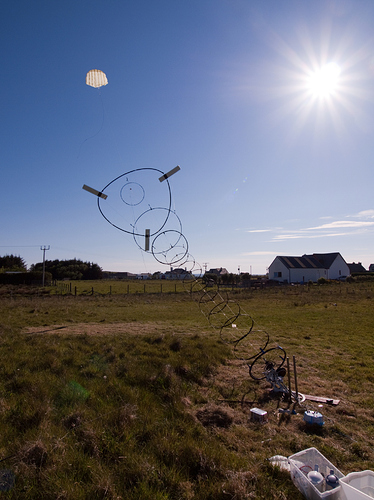 Daisy (1 of 1).jpg1511×2015 2.45 MB
Gave me a chance to test out how the line tension based generation governor fits in… Was really good to see the difference between tension when the rotor is up and stalled at the start vs once the rotor is spinning. Read about 90N before and around 300 - 450N after.

Generation was fairly smooth on the whole, but I’m still ramping up and down based on trends and I think the software ramp downs were a bit over the top culling regen current to near zero… nervousness. SO yeah, there are power peaks but longer ramping up to them.
Like I’ve still only had a chance to glance at the real data. Weekend - Family.
I reconfigured the gen software in the field a few times But I do need to make it much more object-oriented and less linear. It’s butt ugly.

I made sure to have my emergency drive forward button on this time. It comes in handy for startup and just incase you haven’t started up enough … I think there was a lot of resistance down on the wheel because there was a very quick overtwist moment on one start which the forward drive sorted.

Then I got the dual rotor up. First run & It needed a wee bit of line balancing on the top cone lines, and trying lines between wing inner and lift line centre is… hmmm …maybe for a later wing type. but ok
Power was ok but the wind was dropping and gen control was still a bit timid on the brake current.

Got it back up and running again. bit more regen brake ask. but it was obvious the lift kite tension was now way down. The kite rings looked too heavy and as predicted, about 1min after spin up, the lower ring hit the ground. Yes I was wearing a helmet… no bad damage. one of the ring tubes folded just in front of the fuselage. Surprisingly little damage. I could have replaced the tube but wind was too low.

For finishing a test It’s easy when the rig is spinning, to pull the lifting kite around the wind window to stall the rotor. This will be harder in high wind. Another solution or 3 will help there.

The rigidised foam rotors are certainly fast once they’re flowing. You can see line blur at 1/500th second 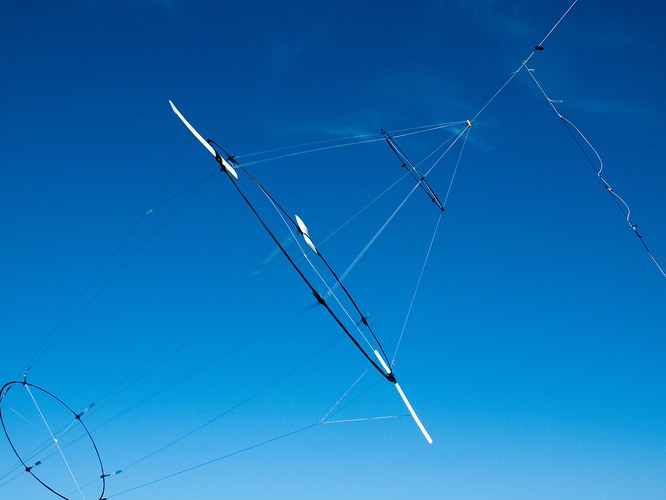 Daisy (1 of 1)-2.jpg2015×1511 2.47 MB
Interesting also how straight up the lines are. very little twist and high tension = very efficient torque transfer with very little need for hoop material. You can see the non drive tethering clips on the lower ring being spun outward.
2 Likes
Tom May 18, 2019, 9:55pm #7

I’d call keep calling your particular system Daisy.
Similar systems could be called “Daisy method”.
Mechanical drag mode awes is more of a classification and not so well suited as a name.
My own try at classifying awes: Terminology - classification

More from the test 17th May 2019. Here is a video of me stalling the turbine rotor stack by guiding the lift kite to the edge of the wind window. I’d spotted a problem at the top of the stack, so decided to take it down. One of the rods had popped loose inside the compression cuff.
A lot easier to stall before trying to handle …

Here are the visuals of the analysis for the single rotor tests.
The algorithm needs to change … torque demand was too low far too much.
More emphasis will be put on governing demand by line tension.

13 posts were split to a new topic: Kite network lattices as metamaterials

Perhaps this topic title should have included “Daisy” rather “Network”, which implied invoking general Network Kites Principles, as Rod did by linking to a metamaterial tweet, was not out of place, and did not require purging.

For further clarification on advantages of network kite formations in AWES,
Have a look over the presentation I gave at WESC2019

At the moment, after suffering mainland wind and field access issues, I’d say stability of deployment is top benefit of networked kites.

Pretending you will divide LCOE by 2 with that tech is simply highly unrealistic. How could such an immature tech compete with classical wind turbine.
Saying that this is something you hope the tech would achieve one day is slightly different.

Surprising that most recent companies use the same unconvincing argument than older one ( claiming that 10 years ago, meanwhile wind turbine as cut cost by 2!)

If the LCOE train just passed, we must rely on subsidies for AWE for a long time, or another benefit could emerge to justify AWE:

One could see (we must hope) that «not in my backyard» issues could be more important than pure LCOE. Some problems may be solved with AWE just by the virtue of being a different design.

Anyways, the world is better off if we can choose from HAWT or AWE per installation, so any local benefits may be maximized…

kPower has long proposed AWE should eventually operate over any sort of surface use, in busy airspace, as proper aviation.

If aircraft naturally fly over cities and conventional windfarms, so in-principle could AWES, including Daisy Networks. We will also see side-by-side AWES and HAWT generation according to circumstance.

The key insight is that surface winds and upper winds are spatially distinct, and the respective solutions should work in close proximity with others.

Its also conceivable to upgrade or retrofit HAWT towers with Daisies. We will see every sort of experiment in coming years, to solve problems that may seem hopeless.

I think precisely because this tech is so immature and performing so well acts in favour of a claim on better LCOE to come.
Yep, I claim my prototypes have the best results in AWES. Especially in terms of power to cost.

As for aircraft, let’s go for a massively out there claim. Aircraft will eventually have to fly through gaps in AWES deployment.

Aircraft have always flown in the gap before AWES deployment. I say let them fly afterwards too

Seriously, AWE will share the airspace commons with all other aviation under the same rules and standards. Operationally, AWES will be avoided just like mountains and other obstacles, when they are present. The FAA has already ruled this, more-or-less, as long as we can also do sense-and-avoid with a PIC and VO.

For those of us who believe global warming is real and humanity will react to the issue in a sane manner, it is quite clear that AWE will have priority over aircraft, if it should come to that. Not in absolute terms in either direction, but neither will be impossible. I think a possible scenario if AWE was popular would be to limit air traffic to limited corridors.

@tallakt, yes I think this argument shall be forgotten for some times. One day it could be true, but not in the comings years.
I still believe awe is more about permanent generation than lowering LCOE.

@Rodread, do you think your prototype could be turn into a product? What would be main characteristics? Weight, dimensions, power output, price, market?