This potential design comes from the double observation of the difficulty of implementing AWES not including an aerostat, and the disadvantages of gases lighter than air, and in addition the practical limits of the Magnus effect.

Different combinations including a blimp are in the forum, such like Magnus effect + solar, Is an electrically heated balloon lift support for AWES possible?, Info on hydrogen and (tethered) hydrogen aerostats, AWES using LTA with PV for hydrogen production on board.

Some observations: the power consumption of a Magnus-based effect balloon is significant and likely prevents a useful use when the linear peripheral speed of rotation exceeds wind speed, so when the coefficient of lift becomes interesting. And the configuration to spin the balloon is not easy as it scales, even with external belt. Otherwise hydrogen is dangerous for a long term use. Helium is expensive.

So the purpose is avoiding the drawbacks above while including a (solar) aerostat. It should be large enough, having a double envelope in order to keep some heat, even by night or without sun during several hours or days, in order to keep the airborne system aloft all the time. Both (crosswind or not) yo-yo and (stationary) turbines aloft uses can be studied.

Designs such like LTA windpower or TARS could be transposed into solar versions. In my opinion other designs including larger wings could be studied. ETFE foil could be an appropriate choice for the external envelope, and perhaps Tensairity ™ for the whole.

As balloons and blimps are the greatest existent aeronefs (all the things flying) kytoons could allow scaling more, in addition to their cumulative aerostatic and dynamic lift.

After some recent researches it turns out that the aerostatic lift would be too low and the losses too great at night to keep the balloon constantly in flight, unless perhaps its dimensions were really gigantic. MIR (a solar balloon in free flight, not a tethered balloon) is described on:

That said the solar aerostatic lift would decrease take-off and landing operations. And above all the inflatable structure is a proven mean to scale.

Perhaps there are some possibilities to harness both solar and wind energy at high altitude, benefiting from both more powerful winds and more solar energy above clouds, by using the same ASWES. Some solar films could cover the balloon, being quite light although less powerful and still hazardous for the environment. Aerospace products – Flisom : Weight: commercial products as light as 80 g/m² Flexibility: rollable down to 1cm diameter Projects with balloons: [NextPV suggests …

Kytoons would be suitable for lift from both buoyancy and aerodynamic lift. With an elevation angle of 60 to 80 degrees, airborne solar collectors (ASC) or ASWES would occupy much less space than AWES, whose elevation angle is lowered by harnessing winds for energy generation. As a result, and unlike AWES, ASC could be installed virtually anywhere. The gain of solar energy in altitude compared to the ground would perhaps not be enormous (but not negligible), but it would be constant whatever t…

It seems natural to set up solar kytoons supporting the solar cells. In this case the dynamic lift of the kite of each solar kytoons is added to the aerostatic lift generated by solar energy.

Thus a part of the received solar energy is converted into heat producing the aerostatic thrust (transparent and/or black envelope and with a reflective insulating part) while another part carrying the thin film solar panels generates the production of electricity which is conveyed by the tether.

When the night falls, the production of electricity stops, but the intermittency is predictable and therefore more easily manageable: batteries would be installed at the ground stations or, better, other energies would take over, or the surpluses would be exported, or partnerships would be made between countries located at the antipodes among other possible partnerships.

Of course the solar thermal balloon generates less thrust than hydrogen, although this thrust would not be negligible at altitude (less clouds, more radiation), but a larger balloon is not a disadvantage insofar as it supports more solar cells and more kite area which benefit from more powerful and regular high altitude winds. Moreover the thermal solar, which fits perfectly with the solar panels, does not involve the dangers of hydrogen and the problems of maintenance of all the gases lighter than air.

Airborne solar wind energy systems (ASWES) could be the family name of this devices, while solar kytoons (SK) would be their first name.

I don’t think you could get enough lift from solar heating to make much of a difference. Maybe just a ground-based, pull-the-pin, instantly-inflatable solar plant for… for… for… - oh wait, I know: Disaster Relief !

A (solar) kytoon has double lift: a kite lift, benefiting from strong winds at high altitude, and an aerostatic lift (about 1 N / m³ (= 0.1 kg / m³) or 1.5 N / m³ and more if no wind = less loss by convection or/and high insulation) when the black part is well insulated by a transparent envelope like this: 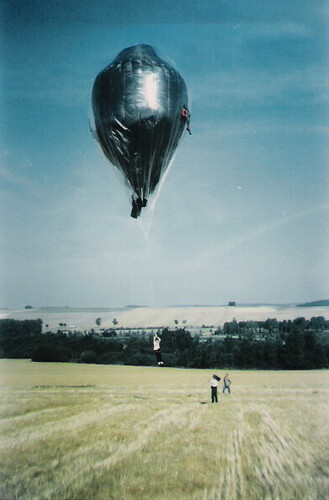 Perhaps the kite alone could be sufficient, the thin film solar cells being implemented on the wings.