This topic reviews concepts based on tetrahedral tether-tripod unit-cells in AWES engineering. Tigner’s patent drawing below shows a variant, but various other cases exist, both experimental and theoretic, generally of shorter proportions. Unit-cells can also be combined into kite networks interconnected aloft. Its a very basic rigging method.

Pierre, TUK was unaware of KiteLab’s prior work when they published, but since then we have exchanged many nice emails on shared AWES concepts. Be patient in how this research unfolds to meet your criteria for acceptability. The tri-tether method actually helps constrain the kite to a tighter pattern scope than a single-line can, and better retains the kite inside the land footprint, with far less chance of breakaway, than single-line topology. Our oldest variable tri-tether aviation case is … 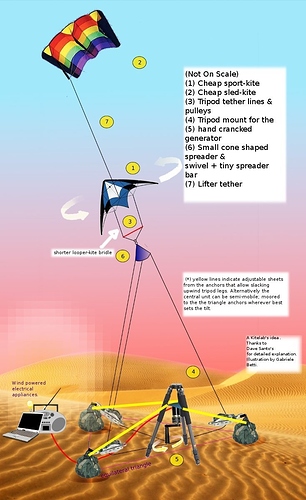 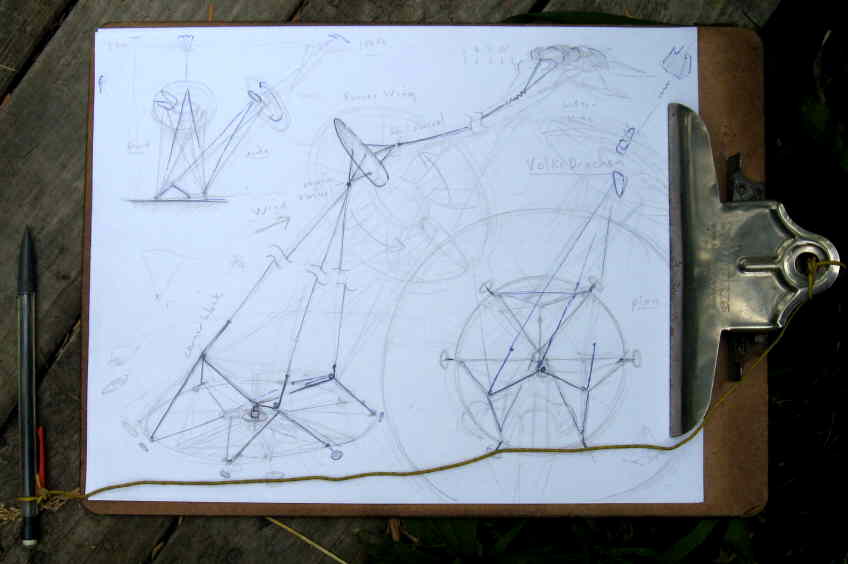 For what I see, the anchors can be largely spaced, and allow to face wind changes from three units. For what I understand (please correct me) the intermittent generation from the yoyo system is solved by an alternate move between two of the three anchors according to the wind direction.
Thanks Dave to tell more.

The main advantage of this method is automatic crosswind load-motion cosine-gain.

The Old Forum archive documents this topic over hundreds of messages going back over ten years.

Demo video does not work. Seems highly sophisticated setup to me. No commercial viability possible. I also wonder how much energy has been produce with this setup by Dave. I mean measured power, not guessed or feel by hand

I have asked Joe Faust to locate better KiteLab links. Old mpg format does not work for many folks.

The demo shows a hand crank lantern generator being driven, at about 5-10W. The more impressive power signal was how the log first used for a center anchor was spun into the beach, perhaps at about 100W.

Many early KiteLab devices are in the World Kite Museum collection. They can be studied and tested further by scholars, to provide Open-AWE third-party assessment. We should all wonder how much measured power Makani’s M600 really nets, not just KiteLab’s numerous first-try toy demos.

This will avoid having to download videos in format perhaps challenging to some readers.
E.g.:
tripodtether by KiteLab See also: Drawing

Thanks Joe, and to everyone patiently waiting for a large trove of early EnergyKiteSystems AWE documentation to be further aggregated, reformatted, and indexed.

The first tripod-tether AWES demo was 2008, which seems a lifetime ago with so much progress since. The 5-10W estimate breaks down about half to the generator and half lost to slop of the center tripod station. I am out of breath during the video because I had just launched the pilot from downwind and sprinted an excited 50m dash to catch the video before anything stopped working, to move onto the next hack.

KiteLab Group videos are only intended to document basic functioning of AWE concept after concept, not sell anything or impress anyone.

I put again some links and an extract of my comment from What is possible with Payne's patent US3987987 figure 5? as I think this topic is yet more appropriate.

The figure 9 represents the curve of power for a 20 m², 5 kg paraglider at different wind speeds. The computed power is 6000 W at 9 m/s wind speed.

Tests of the tri-tether rig with the same wing and similar conditions could lead to a fair comparison. Otherwise the simulation could also include the drag of the wing with the tethers, taking also account of the weight of the tethers in regard to the wing area, then the resulted expected power. Some advantages can be expected such like a better safety thanks to the three tethers and a continuous generation.

I would add Dave’s video: I presented the tri-tether above, mentioning Assessment of an Alternative Concept for a High- Altitude Wind-Power Generator publication, and some information and also some expected advantages.

Now I will try to explore what can be the disadvantages. I made an analysis on What is possible with Payne's patent US3987987 figure 5? and on some previous posts. Said analysis also stands for the tri-tether configuration. As shown on figure 1 from the publication, the tether network is fully connected. The kite force (decomposed into a force in tethers by kite pull and a force by crosswind kite motion) acts simultaneously on the three anchored tethers composing the tether network. As a result a significant part of the force is not used to rotate the generator, and the tether network acts as a yoke preventing the kite from taking full speed.

A mean to overcome this issue would be conceiving a rig inspired by OrthoKiteBunch where only one tether is transferring the kite force in the same time. Winches and their active control would be required. Here is a sketch below: 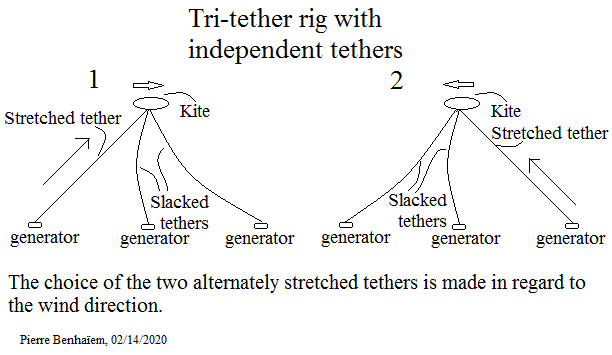 I think it is limited because the slack tethers are not slack, rather less tensioned than the taught tether

The slack tethers are fully slacked by acting on winches and also because the tethers are independent as I mentioned just previously on the comment of the sketch and on the sketch itself. Any smart reader would understand what I am demonstrating.

Winches and their active control would be required.

Not this smart reader. Or perhaps maybe you are the one not understanding what I said?