This is not an inflatable (LEI) kite as described on https://www.researchgate.net/publication/337886197_Improving_reliability_and_safety_of_airborne_wind_energy_systems and comprising an inflated tubular frame.

This is a little but not quite a kytoon which generally comprises a balloon and not or slightly inflated wings working as kites on the sides.

So what do I call (flexible) “kite-blimp” or (rigid) “kite-airship”? This would be a sort of blimp shaped as a kite. In first its scalability is far beyond the previously mentioned devices, because it is aerodynamically shaped throughout, the thickness assuring more structural rigidity when inflated, as for any airships, but unlike a kite.

So the high level of scalability of a kite-blimp, and still more for a kite-airship, is a first and decisive advantage for AWES. But that is not all. Let us see Voliris design on https://voliris.com/ (project NATAC), specifications in French on Brochure NATAC H2 – VOLIRIS . I translated some elements for this project:

Page 9: hydrogen produced by electrolysis of water, volume of the airship 25 000 m³, hydrogen is also used as fuel; 2 beams containing in total 4 tons of liquid hydrogen send hydrogen to maintain the inflation, and for the engines feeding their respective propellers of 6 m of diameter.

This it can be seen that it is particularly wide, which, in addition to the greatly increased lifting area, allows a configuration of AWES farm in bumper car mode , mitigating the severity of the shocks in the event of a collision, the flexible elements being in contact (beware, however, of static electricity with hydrogen). In this preferred configuration allowing a greater density (power to space use ratio) the kite-blimp operates in hover and carries turbines probably larger than the propellers on: 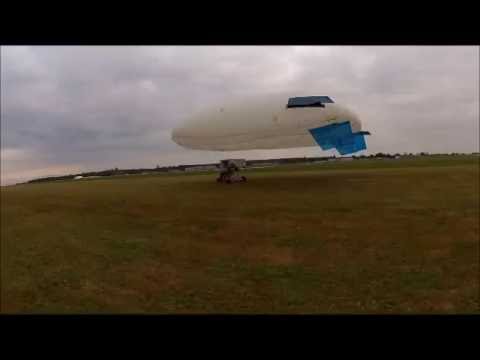 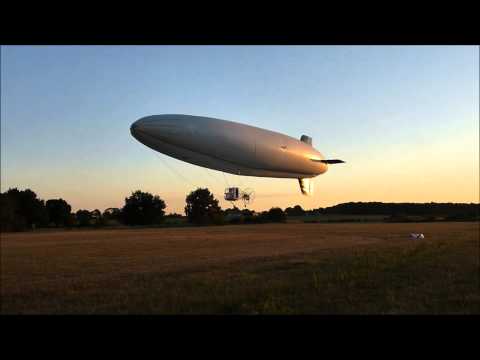 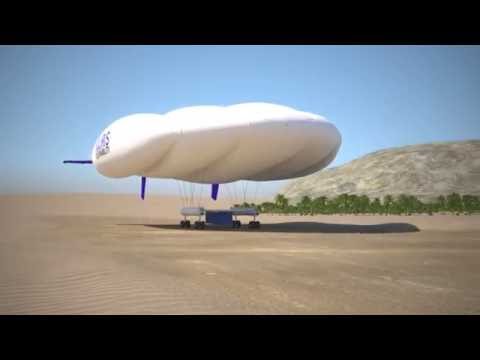 As fly-gen AWES, specifically FlygenKite (a soft wing replaced by a kite-blimp carrying a support of the turbine(s) according to a configuration comparable to that of NATAC), an advantage would be to not undergoing the weight which prevents positive generation during crosswind path and limits scalability (see Makani M600). The supposed lift to drag ratio of 5.5 (see above), although not very high, is sufficient for possibly large production thanks to a far larger scalability.

Although I think that using helium or preferably hydrogen is better, I wonder if such a device could fly as a simple kite inflated with air (keeping the structural advantage of rigidity allowing scalability like an airship), but I am not sure because of stability issue. 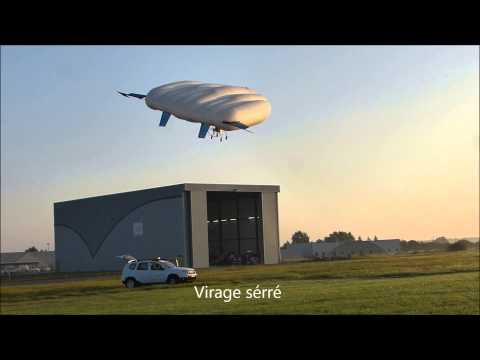 I just see this video and post it because a realization (not only a rendering) close to NATAC configuration of a wide airship (see above) is shown. As I mentioned above the structure carrying the propeller motor by suspension lines is close to that of the old FlygenKite. The title of the topic includes kite-blimp and AWES terms, so it is a tethered device with an appropriate bridle.

To yet increase scalability some rigid elements could be included, comprising possibly Tensairity ™ beams.

As amply featured and specified in my AWE patents…

Besides, there is little chance now for a really new design for an AWES given the considerable number of patents, and this even if this design leads to something that works, unlike everything that we have now seen. The difficulty is to open AWE way with a suitable design. After that, possibly subsequent patents could relate to improvements.

I think a kite-blimp, as fully inflated kite is not new as such, but could be suitable for an AWES as it can scale far beyond rigid and even flexible wings, and also benefit from combined aerodynamic and aerostatic lift. And Voliris achieves this design but for a quite different reason. 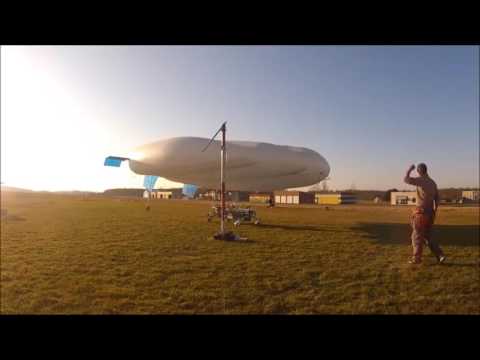 inflatable airfoils as blades for SuperTurbine™. But the context is different

That said if this “kite-blimp” widened even more, it could result in a gigantic blade. Even at a low lift to drag ratio of 5 (Voliris indicates 5.5), so comparable to that of a flexible wing, let us imagine a SuperTurbine ™ according to figure 75 of EP 1407139 B1, or stacked Daisy, each being 200 m diameter and 600 m height, and even with a Cp (power coefficient) of 15 or 18%… 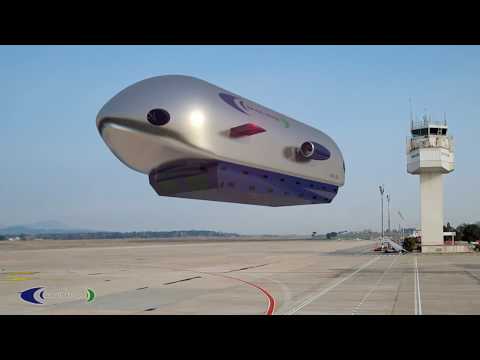 The first generation of Varialift airships will be powered by standard aero engines. But the rigid aluminium exterior offers the potential for power to be supplied by solar PV/battery units on later models.

This concept is different from that of Voliris in that the structure is rigid, but similar in that aerodynamic and aerostatic lift are combined. If a tethered AWES option can be realized, it would combine both solar (solar PV on the envelope as specified) and wind power (turbines below as previously), and at high altitude, the whole being able to fly at a high elevation angle thanks to both helium and high L/D ratio presumed from specified high flight speed.

This concept is different from that of Voliris in that the structure is rigid, but similar in that aerodynamic and aerostatic lift are combined

It will use the company’s patented helium compression technology […].

To resume I would see something like Voliris design with aerodynamic lift, but perhaps in aluminum like Varialift Airships in order to achieve more scalability, lifetime, and lift to drag ratio, also to allow
implementing solar PV on the envelope, and in the end to facilitate better recycling.

Below we could have suspended conventional wind turbines, or rotors driven by rope-drive in @Kitewinder Kiwee style, or even several rows of @dougselsam’s SuperTurbine ™ rising from the front to the rear of the kite-blimp (without rigid structure) or the kite-airship (which comprises a rigid structure), with a little aerodynamic lift, but not much because the rotors would be wind turbine rotors (as for the report), and not autogyro rotors.

Hi Pierre: Seems like the envisioned very large blimps and airships are often seen in renderings, but never actually built. I can think of one reason, that is also common to hang gliders, paragliders, and even small general aviation airplanes: The airspeed is in the same range as windspeeds, so a strong wind can really screw things up. If you are flying a hangglider that likes to travel at 20 MPH, but find yourself in a 30 MPH wind, you might have trouble penetrating in the direction you want to go. Takeoffs and landings can be unpredictable and dangerous. Same with these blimps and airships. If they are designed to fly at say 40 MPH, a strong wind is in that same speed range. With all that surface area, in a strong wind, a blimp could be difficult to handle. Jets meanwhile fly at several times the windspeed in most cases so they can land in a 30 MPH crosswind if needed.

Hi Doug, I changed a little the title of the topic.

Seems like the envisioned very large blimps and airships are often seen in renderings, but never actually built.

The old Zeppelin could be over 200 m long, and the recent Airlander is 92 m long, so far beyond the dimensions of any plane.

The airspeed is in the same range as windspeeds, so a strong wind can really screw things up. If you are flying a hangglider that likes to travel at 20 MPH, but find yourself in a 30 MPH wind, you might have trouble penetrating in the direction you want to go.

The kite-blimp or kite-airship would be a giant lifter kite, not a travelling blimp. I also described a crosswind use but as an accessory use, as it is not adapted. As I mentioned in the initial comment Voliris claims a lift to drag ratio of 5.5, so more than almost all flexible kites. This would lead to a good buoyant lifter kite supporting the turbines with suspension lines. In my opinion, high speed winds would be no more of a problem than for any stationary lifter kite, but experiments would be useful. Perhaps aerostatic lift would add some stability: I remember that Peter Sharp claimed that the Sharp rotor was more stable as a kite when inflated with helium.

Takeoffs and landings can be unpredictable and dangerous. Same with these blimps and airships.

Yes, but as a kite, things can be different, better or worse. The control should be made by several tethers and their respective anchors. If the airship is shaped like an Isotropic kite, for example a lenticular airship, things would be easier concerning both landings and takeoffs.

Wow Pierre I was surprised to see one of these giant blimps was actually built.
I remember seeing it now - people said it looks like a giant “ASS”.
Unfortunately, it quickly crashed:

What happened Airlander airship after that? More crashes! Like I said, airships and blimps can’t handle wind!

From Wikipedia we find: " The HAV 304 was originally built for the United States Army’s Long Endurance Multi-intelligence Vehicle (LEMV) programme. Its maiden flight took place in 2012 at Lakehurst, New Jersey, in the US. In 2013, the LEMV project was cancelled by the US Army."

Wow, Lakehurst NJ - where the Hindenburg Airship Crashed and burned!

“The Airlander 10 prototype crashed in 2017, HAV decided not to restore the aircraft, and focus on the development of the version for mass production. It has been receiving significant backing both through crowdfunding and state grants ever since, and issuing progress updates regularly.Mar 16, 2021”